The eight suicide attacks that targeted al-Qaa, a Christian village bordering Syria, might revive sectarian tension, especially between the residents of the village and the Syrian refugees. 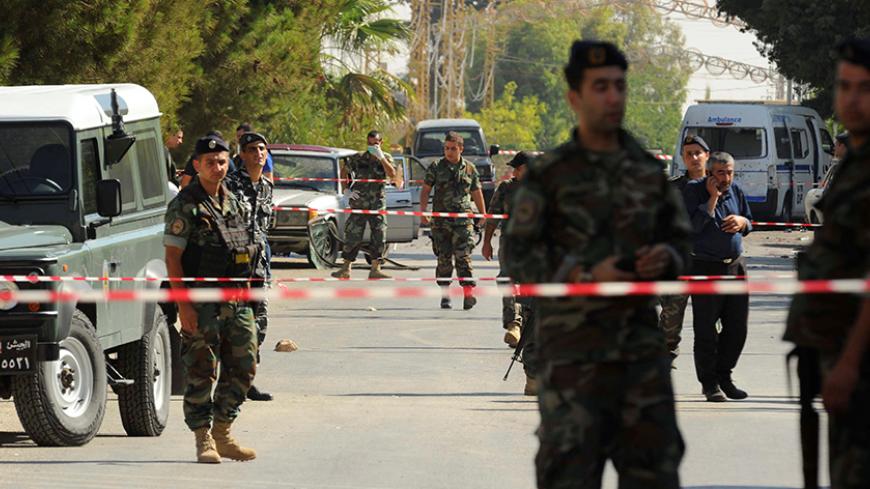 Lebanese army soldiers secure the area at the site where suicide bomb attacks took place in the Christian village of al-Qaa in the Bekaa Valley, Lebanon, June 27, 2016. - REUTERS/Hassan Abdallah

AL-QAA, Lebanon — A wave of suicide bombings targeted the Lebanese Christian town of al-Qaa, which borders Syria, on June 27. In the early hours, four suicide bombers detonated their explosive belts, followed in the late evening by four other suicide bombings. The attacks are an indicator of attempts by Syrian terror organizations such as Jabhat al-Nusra and the Islamic State (IS) to break the siege imposed on them by Lebanese intelligence and security services. These attacks could also further fuel sectarian tensions in an area where the fallout of the Syrian conflict has created deep divisions across religious communities.

When Shadi Mkaled, an al-Qaa resident, woke up to eat breakfast before beginning his day of fasting, little did he know he would find himself face to face with four suicide bombers en route for an unknown destination.

According to a recording of the army’s interview with Mkaled, provided by an officer in the Lebanese military intelligence to Al-Monitor, he heard a noise in the garden at around 4 a.m. The family walked out to find four disheveled men who pretended to belong to the Lebanese army intelligence.

Suspecting foul play, Mkaled takes out a weapon and fires at one of them, who blows himself up. Roused by the blast, local residents and Lebanese army soldiers ran to the site of the explosion, clashing with the other three suicide bombers, who detonated themselves subsequently at 10-minute intervals.

“Al-Qaa was the intended target of the [first] quadruple bombings, which resulted in the death of nine people, including the suicide bombers, and injured 15 others. We still have no information on the attackers’ nationality,” al-Qaa Mayor Bashir Mattar told Al-Monitor.

The deadly spate of bombings resumed a few hours later at around 10 p.m. when four other suicide bombers targeted the central square of the town, a Lebanese army outpost and another manned by intelligence services, an officer in the army’s counterterrorism unit told Al-Monitor. According to Toom, six more people were injured, one critically.

Al-Qaa security incidents can be better understood through a geographic lens. The town is of strategic importance as it is a gateway between Syria and Lebanon, sitting on the borders of a large agricultural region called Masharih al-Qaa (Qaa Projects), used as a smuggling route by traders of all sorts and rebels after the Syrian revolution.

Since the Syrian conflict erupted in 2011, al-Qaa’s mountainous area has been rocked by clashes and shelling pitting rebels — and later radical groups — against the Lebanese army. In August 2014, the army clashed with IS and Jabhat al-Nusra, al-Qaeda's affiliate in Syria, in the border town of Arsal, a few kilometers from al-Qaa.

During the battles, IS and Jabhat al-Nusra kidnapped 30 Lebanese soldiers and policemen, 16 of whom were released after 1½ years of negotiations. The borders are now cordoned off on one side by the Syrian army and on the other by the Lebanese army through the mountain area of Jaroud Qaa and Jaroud Ras Baalbek, up to the town of Arsal. But behind the mountains, terror organizations still roam free.

“We still have not identified the faction behind the bombing,” the officer in the Lebanese intelligence said. “But we believe the bombers came from Syria and not from the border area of Masharih al-Qaa, which is under tight surveillance,” he added.

Lebanon's army has fought off jihadi factions along the frontier and has sought to clamp down on local cells operating in the area, arresting several cells in recent months, according to municipal and military sources Al-Monitor spoke with.

“Al-Qaa was definitely not initially the target,” said the Lebanese army officer, who appears to disagree with the opinion of the town’s mayor. “The number of suicide bombers who seemed well trained makes us believe they were destined for a larger operation. They were most probably waiting for a transporter who would smuggle them out of al-Qaa and provide them with fake identity cards enabling them to reach another destination — possibly the cities of Baalbek or Hermel [two Hezbollah bastions] or even Beirut,” he said.

This opinion is also shared by the counterterrorism officer who explained that the second cell responsible for the nighttime attacks probably got stuck in al-Qaa, with its members blowing themselves up after the village was encircled by the army. “They were unable to reach the army positions to detonate themselves, which explains the low number of casualties in the evening,” the officer said.

The high casualty count incurred during the bloody day will nonetheless put pressure on already strained relations between the Christian village and Syrian refugees residing in Masharih al-Qaa. According to Toom, there were already tensions between al-Qaa residents and the refugees who illegally occupy agricultural land owned by the town's residents.

“This could increase sectarian tensions — it is a dangerous turn of events,” Mattar said. According to the municipality, roughly 30,000 Syrian refugees reside in Masharih al-Qaa.

The sectarian fires started by the bombings also threaten to reach the broader Lebanese social landscape in the Bekaa Valley. The region of al-Qaa, Ras Baalbek, Arsal, Labweh and Baalbek is home to Christians, Sunnis and Shiites.

Since the Syrian revolution, a growing feeling of resentment has been experienced by the people in al-Qaa toward neighboring Sunni Arsal and the Syrian refugees in Arsal. The residents of these areas view the Syrian war from opposite ends of the spectrum. Sunnis and Syrian refugees side with Syrian rebels, while the majority of al-Qaa residents see them as terrorists. Complicating the picture is the vicinity of Shiite villages whose residents widely support Hezbollah, which is fighting alongside the regime of Syrian President Bashar al-Assad.

According to the former mayor of al-Qaa, Saadeh Toum, other reasons are also rooted in the past: Al-Qaa residents have accused Arsal residents of exploiting Masharih al-Qaa illegally since 1975. “Al-Qaa projects are mostly owned by al-Qaa residents but are farmed illegally by Arsal villagers, which has resulted in ongoing land disputes,” Toum explained in a previous interview two years ago.

According to local sources, the Lebanese government earmarked $12 million to define the land and determine true ownership — a process that never came to fruition.

As al-Qaa residents lick their wounds in the wake of the eight deadly suicide bombings, Lebanon is struggling with its manifold repercussions that could engulf Lebanon in a new phase of uncertainty.

But little is expected from the Lebanese government, which has been marred by paralysis in one of the worst institutional crises since the end of the war.