Hundreds of Syrians displaced in the Lebanese border town of Arsal have returned to their country voluntarily, causing tensions between the Lebanese Foreign Ministry and the UNHCR. 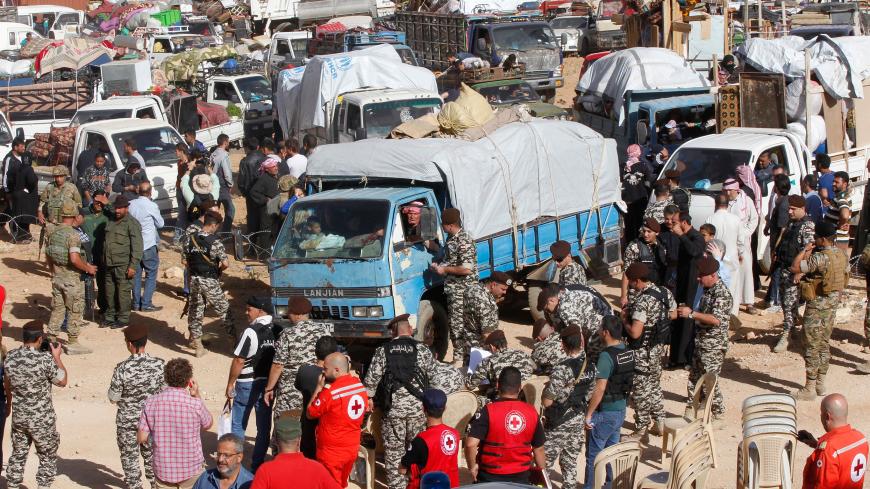 Syrian refugees prepare to return to Syria from the Lebanese border town of Arsal, June 28, 2018.

BEIRUT — The second group of Syrian refugees in Lebanon might be heading home from the border town of Arsal on July 7 if all goes according to plan. Arsal's mayor, Bassel al-Hujeiri, told Al-Monitor, “The number of displaced in Arsal alone exceeds 40,000. Those who want to return to Syria will be divided into batches. The second wave will leave July 7 if the Syrian authorities approve the 500 names and if the return is voluntary and based on [the Syrians’] request.” The refugees' return to Syria has sparked controversy in Lebanon and has led to friction between the Lebanese Foreign Ministry and the UN refugee agency the UNHCR.

Lebanese General Security had accompanied the first convoy of displaced Syrians bound for home on June 28, leaving them at the Zemrani border crossing. The UNHCR, which worked at the Arsal refugee camp, had been in contact with the 294 Syrians about returning and had coordinated with the security forces.

Beirut and Damascus are currently coordinating to organize the voluntary return of the displaced. Lebanese General Security received some 3,000 applications from those seeking to return. Most are waiting for approval from Syrian authorities.

There are no official or accurate figures on Syrian refugees in Lebanon, but they are estimated to number more than 1.5 million. The displacement has been an economic, social and environmental burden on Lebanon. In addition, employment opportunities for the Lebanese have also dropped with employers preferring Syrians, who accept lower wages and fewer benefits.

Relations between the UNHCR and the Lebanese state had been tense prior to the first convoy due to allegations by Lebanese Foreign Affairs Minister Gebran Bassil that the agency was improperly discouraging refugees from returning to Syria. The issue came to a head on June 8 when in retaliation Bassil ordered the Directorate of Protocol to stop processing residency applications for UNHCR staff until further notice.

Bassil supposedly based his decision on a report prepared by a delegation that he had sent to Arsal on June 7. The delegation claimed that the UNHCR was discouraging refugees from returning home when interviewing them, and it was spreading fear by asking questions about military conscription, security conditions, accommodations and living situations in Syria, along with possible halts to aid and the prospect of returning home without UN assistance. Bassil supposedly had warned the UNHCR repeatedly about its alleged “spreading fear policy,” but to no avail, according to the delegation's report. He also warned that he would take escalatory measures if the UNHCR insisted on continuing with the policy.

On June 12, the UNHCR responded to Bassil’s move in a brief statement published on its website. It stated that it respects the “right of refugees to decide freely and for themselves on returning home.” The agency expressed its concerns about the freeze on residency permits to international staff of the UNHCR and hoped the decision would be withdrawn because it negatively impacts its work in the country.

A UNHCR source told Al-Hayat that the claims about the nature of the UNHCR staff questions are “inaccurate.” The source was reported on June 9 as saying, “The questions asked to the displaced are taken from a book that has been with the agency since its establishment and are posed to all displaced persons, not just Syrians. The questions relate to the town they were displaced from, their house there and their marital status then and now, in addition to whether they had kids and if they had registered them properly. This way, return would not be limited to parents without their children.” The source emphasized that the agency staff follow a standard line of questioning.

On June 14, Bassil met with Filippo Grandi, the UNHCR high commissioner, at the agency's headquarters in Geneva. After the meeting, Bassil said that he was ready to lift the Foreign Ministry’s ban on residency applications if he noticed a change in the agency's policy. He added that he was willing to escalate matters if change were not forthcoming.

Several political parties in Lebanon condemned Bassil’s decision. Nadim al-Mulla, adviser to Prime Minister Saad Hariri, was reported by Asharq al-Awsat on June 9 as saying, “Effectively, there is no dispute over the return of the displaced in Lebanon, but this is not the way to deal with international organizations. It [Bassil’s move] should reflect a governmental policy rather than a minister’s decision.”

On June 22, the Ministry of Foreign Affairs said that it had received a letter from the UNHCR in which the organization expressed its willingness to meet with administration officials to discuss the return of the displaced to Syria. The agency added that it agreed with Bassil’s suggestion to divide Syrians into categories based on their economic or humanitarian status to organize their return. The UNHCR also said it would send the Foreign Ministry data about the reasons for displacement specific to each individual and information about the displaced and their economic situation, which it had been sharing with the Ministry of Social Affairs since 2015.

A source from the Ministry of Foreign Affairs who spoke to Al-Monitor on condition of anonymity said, “The decision to halt residency applications is still effective. The ministry is waiting for the UNHCR to complete the requested plan for the return of the displaced, but no developments have emerged so far.”

The ministry had asked for the plan in a letter to Mireille Girard, the UNHCR representative in Lebanon, on June 5. It asked the UNHCR to “prepare within a certain time frame a plan detailing the measures it would take to begin the return process of the displaced to safe zones in Syria.” The ministry also called on the agency to change its approach to Syrian displacement in Lebanon, because most Syrian towns were now safe for a decent return. Therefore, the UNHCR must help the Lebanese government facilitate the return within the agency's powers.

Lisa Abu Khaled, UNHCR's spokesperson in Lebanon, told Al-Monitor, “The UNHCR has not been notified of any change in the decision of the Foreign Ministry. The Lebanese government, including the Foreign Ministry, is well aware that the UNHCR and UN are not in a position to organize the Syrian refugees' return.” She did not say why the United Nations is unable to organize the returns.

“Our dialogue with the Lebanese authorities is ongoing, especially regarding the upcoming missions that include refugee return,” she added. “We are also working with our partners in the region and with the Syrian authorities to create a suitable environment allowing and encouraging their return. Since 2016, we have been working on the return issue by trying to understand the hurdles that refugees believe are impeding their return. Therefore, it is important to continue our interviews with refugees to understand these hurdles and work on removing them.

“But, at the same time, we respect refugees’ personal choices to return, and we offer them help to build their lives properly after that, by giving them the documents they need like birth and education certificates, among others. Currently, there are 984,000 Syrian refugees registered by the UNHCR [in Lebanon].”

Some obstacles continue to impede the displaced whose names have been approved from returning home, the main reason being that some registered family members are excluded from the approval, thus forcing the family to reconsider its return, according to Arsal's mayor. 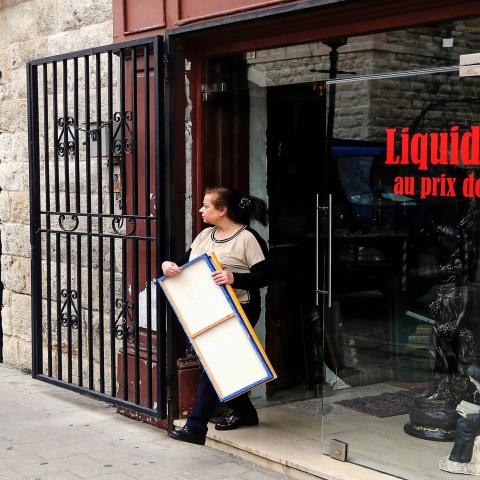 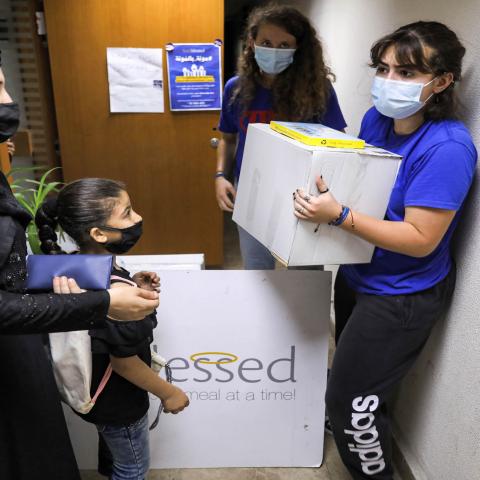 Lebanese brace for lifting of subsidies as conditions deteriorate