What’s next for Syrian refugees in Lebanon?

As pressure is increasing on Lebanon’s economy, the Lebanese authorities are working to ensure the safe return of Syrian refugees, despite the hesitation of the international community and the United States. 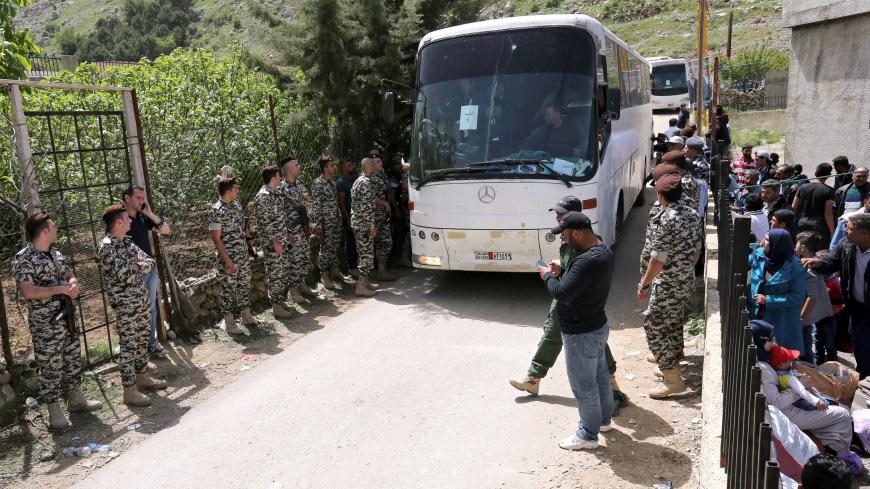 Lebanese General Security agents stand near buses that will take Syrian refugees who fled to Lebanon back to Syria from the southern village of Shebaa, Lebanon, April 18, 2018. - REUTERS/Aziz Taher

As many Syrian refugees have entered their seventh year in Lebanon, there is mounting pressure in Beirut to accelerate the process of returning them to their home country. However, the United States and the international community continue to curb this impulse by arguing that Syria is not ready yet to facilitate such a large-scale return. The stakes are high domestically and regionally, as such steps could help break the Syrian regime’s regional isolation, particularly when it comes to connections through Beirut.

Fearing a potential repeat of the long-term settlement of Palestinian refugees in Lebanon, the Lebanese authorities did not establish camps for the nearly 1.5 million displaced Syrians. According to Human Rights Watch, around 74% of Syrian refugees aged 15 and above lack legal status, which further restricts their access to work, education and health care. With the economic situation in Lebanon deteriorating and the Syrian war winding down, this issue is taking center stage in Beirut and will no doubt top the priorities facing the next Lebanese government.

Al-Monitor spoke with a wide range of officials, in Lebanon and abroad, who play a leadership role in addressing the return of Syrian refugees and who shared their insights on condition of anonymity. Moving forward, the Lebanese authorities plan to firmly raise this issue with concerned international partners, citing the growing pressure on the national economy and demographic concerns in the country. Last month, the relationship between the Lebanese authorities and the United Nations refugee agency, UNHCR, was tested as nearly 500 Syrians left in 15 buses from the Shebaa Farms in southeast Lebanon to the Beit Jinn District southwest of Damascus, which was recaptured by the Syrian regime in December. Former Beit Jinn Mayor Haytham Hamoudi reportedly coordinated this return with both the Lebanese authorities and the Syrian regime.

The Lebanese officials were troubled that UNHCR representatives stood near the buses in the Shebaa Farms area on the day of the scheduled return in a last-ditch attempt to persuade the displaced Syrians not to make this move. In a public statement the UNHCR said it was not involved in the relocation process “considering the prevailing humanitarian and security situation in Syria." The Lebanese authorities fear the international community is preparing Lebanon for an eventual long-term settlement of these refugees. In return, international actors believe the authorities are rushing the return process without having the necessary guarantees. The main contrast between both sides is a matter of assessment, whether the Syrian war is largely over or not.

Current talks between the Lebanese government and international humanitarian actors are underway to discuss these concerns and agree on a policy framework. The two main challenges to overcome are related to the political and logistical dimensions of the return process.

The first challenge is that the return process requires engaging the Syrian regime, and the major interlocutors are not ready for such an overture. On the Lebanese level, Prime Minister Saad Hariri remains, with US support, against fully normalizing relations between Beirut and Damascus. However, President Michel Aoun has opted to prevent a political impasse by designating the general director of the Lebanese General Security, Maj. Gen. Abbas Ibrahim, as the Lebanese interlocutor with the Syrian regime on this issue.

With the Lebanese allies of the Syrian regime making a political comeback during the general elections last month, there is a renewed effort to solve the Syrian refugee issue through high-level talks between the Lebanese government and the Syrian regime. As foreign powers continue to influence the Cabinet formation process, the next government will have to decide whether to keep the talks with the Syrian regime restricted to Ibrahim or raise the engagement to the ministerial level. Meanwhile, international humanitarian actors are not willing to start direct contacts or provide aid to the Syrian regime; hence the UNHCR cannot be logistically involved in a large-scale return process.

The Lebanese authorities are conceding on legalizing the status of the displaced Syrians while at the same time expecting international actors to be flexible on the return process. The 10 special centers to register the Syrian refugees that are to open across Lebanon are meant to expand the capacity of the General Security to implement the policy changes adopted last year regarding the documentation and residency of these refugees. There is an appreciation among US and European officials that the Lebanese government has repeatedly committed to the non-refoulement principle, the cornerstone of international refugee protection that stipulates that no state should expel or return any refugee to the border if his/her life or freedom is threatened.

A senior official in the Lebanese Foreign Ministry told Al-Monitor, “Let’s be very clear, we will not force any displaced Syrian to return. All we are asking is to facilitate the process if they chose to return instead of telling them not to go. Our voice will only get louder on this issue.”

The US view has obviously evolved during the Syrian civil war. Early on, Washington pressured Beirut not to refuse the entry of Syrians fleeing their home country. Once the violence began to fade next door, the US focus shifted to not forcing the Syrians to return. We are currently in the third phase where US officials are accepting the idea of individual, safe and voluntary returns. The UNHCR fears these refugees might return to Lebanon if the conditions are not right in Syria. The Lebanese authorities say that clearing the names of these refugees with the Syrian regime is meant to avoid such a scenario that might discourage other refugees from returning to Syria.

The return process at this point requires Syrian refugees to inform the Lebanese General Security of their intentions to go back to their home country. The authorities then process their request and clear their names with the Syrian regime. In recent months, the UNHCR representatives have begun to meet those willing to return to make sure their decision is voluntary. In the next step, the Syrian regime provides buses to transport the refugees who are returning to their home country. There are thousands of pending requests waiting to be processed and the Lebanese authorities expect this trend to continue. However, the challenge from a logistical perspective is the inability of the resource-stretched Syrian regime to process these requests and to secure enough buses.

It is clear that returning 1.5 million refugees will not happen overnight and might take years. But the aim is to launch this process with incremental steps and within an agreed-upon framework with the UNHCR. The international community is linking the return process to resolving the Syrian conflict but will not stand in the way of individual and voluntary returns. These underlying criteria are expected to guide the return process in the foreseeable future.