Iraq's Shabak minority is in danger, targeted by the Islamic State. 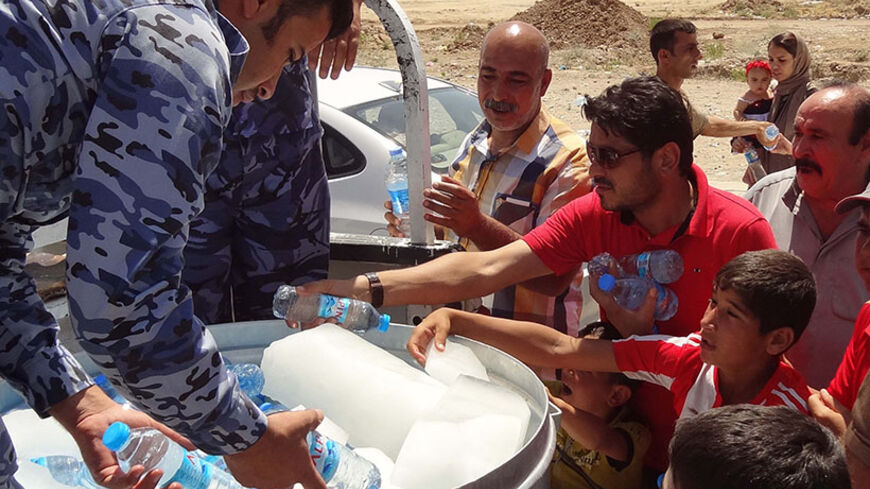 Iraqi military personnel distribute water to Shabaks displaced by fierce fighting between Kurdish peshmerga forces and jihadist militants from the Islamic State (IS), on the road between Kirkuk and Erbil, Aug. 8, 2014. - MARWAN IBRAHIM/AFP/Getty Images

The voice of the Yazidi minority was heard thanks to Iraqi MP Vian Dakhil, who called out to the entire world, decrying the fate of her people under the control of the Islamic State (IS). However, other Iraqi minorities live under similar — or even worse — circumstances, but have nobody to voice their concerns to the world. Instead, they face their seemingly inevitable fates under the control of IS.

Iraq is home to some of the world's rarest minorities, many of whose very existence will be threatened if their situation further deteriorates under IS oppression and violence in Ninevah.

The Shabaks are one such minority. Their religion, language and culture are so rare that they have faced oppression for decades. They now face IS violence, and have either fled their hometowns or been killed by the dozens.

Shabaks have been in Ninevah for over five centuries, with no certain indicator of their real origins. Their language is Indo-European, which includes a wide-ranging vocabulary of Arabic, Turkish, Persian and Kurdish. The majority of Shabaks are Shiite — with a minority Sunni — but their traditions differ from other Shiites. They also have a shared heritage with Sufi traditions. They care more about building takiyah (khanqah), where Sufis gather to practice their religious traditions, instead of mosques.

Shabaks live alongside Christians, Yazidis and other minorities in Taklif, Bashiqa, Bartla, Qaraqush and some suburbs of Mosul. Unofficial statistics indicate they total 250,000 and they only exist in Iraq.

Different Iraqi regimes have oppressed the Shabaks throughout history. The Baath regime, for example, tried to impose an Arab identity on the Shabaks and encourage them to join Arab tribes, with the hope that they would forget their Shabak identity. The Shabaks have also been harmed by stereotypes in Iraqi society. Based on certain books and school teachings, many believe the Shabaks are a group of deviants with false beliefs and odd traditions. This has led to their social marginalization.

Shabaks have become one of the main targets for terrorist movements, especially IS. According to a report published by the Ministry of Human Rights in Iraq, between 2007 and 2009, 1,200 Shabaks were killed and 6,000 displaced. Shabaks are targeted for religious and political reasons, since IS considers them non-Muslims. The Shabak stance in support of the change that took place in Iraq in 2003 and their votes for the Iraqi constitution made them enemies of terrorists.

After IS took over Mosul and the Ninevah plains, major massacres took place in Shabak villages. No accurate reports exist concerning the number of casualties, but it's estimated that hundreds were affected. IS kidnapped several families, with still no word from these families. More than 3,000 families lost their homes and were displaced to Shiite towns in central Iraq, the south and the Iraqi Kurdistan Region.

Al-Monitor met with numerous families in the Shiite town of Karbala. Some told terrifying stories of their ordeals, including how they escaped and arrived in Karbala.

Haneen al-Qaddo, secretary-general of the Shabak Democratic Gathering, said on July 15 that the Shabak people are victims of genocide, calling for rapid measures to save Shabaks and other minorities in Iraq.

The Shabak representative in the Iraqi parliament, Salem Jumaa, implored international organizations to intervene to stop the mass oppression of Shabaks.

Finally, the diverse Iraqi mosaic is in danger of extinction, with small minorities topping the list, since they have no one supporting them. These minorities are in need of urgent and unlimited support from the international community if they are to survive genocide.