Minorities in Iraq's Ninevah plains are stuck between the federal government in Baghdad and the Kurdistan Regional Government based in Erbil, which are competing for their lands. 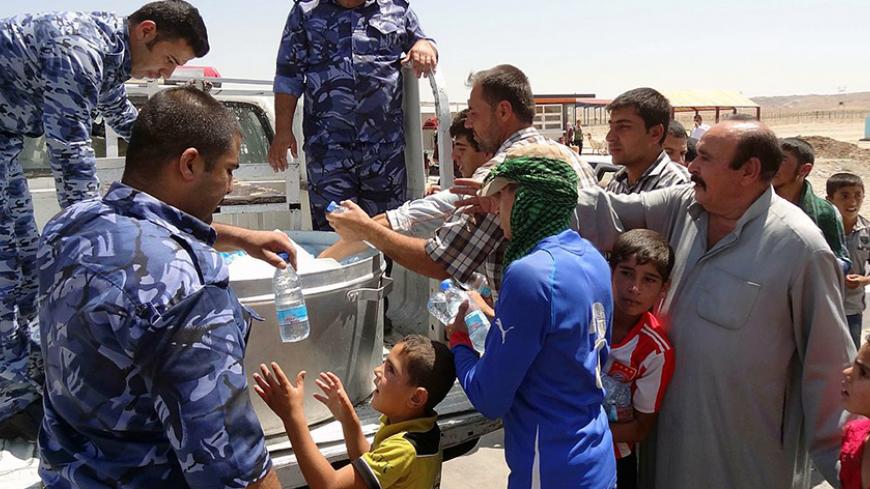 Iraqi military personnel distribute water to Shabaks displaced by fierce fighting between Kurdish peshmerga forces and jihadi militants from the Islamic State after arriving on the road between Kirkuk and Erbil, Aug. 8, 2014. - MARWAN IBRAHIM/AFP/Getty Images

BAGHDAD — The Shabak community is one of the ethnic minorities in Iraq, speaking a language distinct from Arabic and Kurdish. Its members live on the Ninevah plains with other religious minorities including Christians, Yazidis and Kakais.

Iraqi Prime Minister Haider al-Abadi announced Aug. 10 the end of the first and second phases of the Mosul liberation operations. Since the third and last phase will take place this year, per his previous statements, minorities, especially Shabaks, are afraid of a Kurdish-Arab rivalry around their regions. This conflict will reveal divisions among Shabak leaders over their fate and identity.

Young activist Hussein al-Shabaki, who lives in a refugee camp in southern Iraq's Wasit province, is looking forward to returning to his village on the plains. Although he participates in various activities to defend the rights of the Shabak people, he often returns to the refugee camp, devastated.

"I can no longer wait" to return home, he said. "I feel I am locked up in prison, and I have no choice. Our return to the Ninevah plains after the liberation of our lands is not certain, and it remains a political decision."

Thousands of Shabak refugees dream of returning home but worry about falling victim to the Arab-Kurdish rivalry over their villages and about potentially losing their identities among the Kurds or other Shiites. The majority of Shabaks are Shiite, and their lands are located in disputed areas claimed by both Baghdad and Erbil, the capital of Iraqi Kurdistan.

Displaced Shabaks face a complicated situation, as they have been dispersed between the Kurdistan region and central and southern Iraq, and because of political conflicts among Shabak representatives over their alliances with major Arab and Kurdish political currents.

Shabak leader and parliament member Salem Jumaa declared his resolve Aug. 4 along with other Shabak leaders to hold a public referendum for Shabaks to determine their fate. He believes that turning the Ninevah plains into a province affiliated with the Kurdistan Regional Government (KRG) will offer Shabaks protection from the displacement and killings they suffered under the Islamic State (IS).

Jumaa told Al-Monitor he believes the Shabak people once were part of a Kurdish tribe, but over time they split from it and joined other tribes. However, he said, they remain proud of their origins and the Kurdish language.

Some Shabak politicians such as Ghazwan Hamed, the Shabak quota representative in the Ninevah provincial council and a member of the Council of Free Shabaks, agrees with Jumaa that it is in the Shabaks' interest to join the KRG, which would offer them protection and recognize their rights as citizens.

Some other Shabak politicians believe the Shabaks should remain under the authority of the federal government. Hunain Qaddo, the secretary-general of the Democratic Shabak Assembly, told Al-Monitor that other views only aim to divide the Shabaks. He said, "The Kurdistan Democratic Party [KDP] is working hard to take over the regions of the Ninevah plains in any way — including trying to change the identity of the indigenous minorities — due to the economic importance of Ninevah province and its oil reserves, in addition to the fertile agricultural lands of the Shabaks. The KDP also wants to establish a buffer zone between Arabs and Kurds to set the stage for declaring the Kurdish state."

Qaddo suggested forming a province in the Ninevah plains that would be affiliated with the federal government, which would provide security and stability. "The province would have a special administration allowing the Shabaks to manage their affairs independently," he said.

Independent Shabak politician Qusay Abbas, who was a member of the Ninevah provincial council from 2009 to 2013, is trying to balance the different views.

"I believe most Shabaks question the seriousness of any party in recognizing them and their rights. We cannot say the Shabaks have interest in favoring one party over the other. They advocate those who respect and recognize their rights. And, both parties [Baghdad and Erbil] are slackening in this regard."

Abbas told Al-Monitor that it is important for Shabaks to participate in liberating their regions. He said the state must recognize armed factions of minorities whose lands have fallen into the hands of IS.

The bigger picture seems much more complicated, as there are two armed Shabak units, and their militarization has caused a clear and deep rift among them. One of the units is affiliated with the Kurdish peshmerga, while the other fights under the umbrella of the Popular Mobilization Units (PMU), which is affiliated with the federal government.

Jumaa pointed out that Shabak fighters in peshmerga ranks number about 655 and will play an effective role in liberating the land. The fighters are equipped with heavy and light weapons, he said, citing sources in the Peshmerga Ministry.

Qaddo said there are 900 Shabak fighters in the battalion fighting under the PMU against IS. The PMU is supplying the battalion with light and medium weapons, and he expects it to advance to participate in the liberation of Hawija (30 miles south of Kirkuk) and Sharqat (in northern Salahuddin province). He said the battalion will participate in liberating Ninevah province with other Iraqi security forces.