Differing enforcement of regulations concerning violating the sanctity of the holy month of Ramadan is a point of potential polarization. 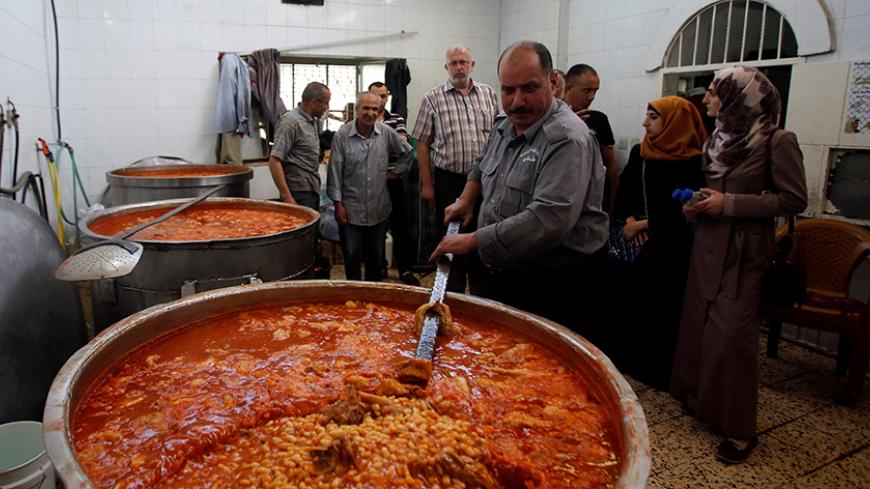 Palestinians prepare food to be distributed for free during the holy fasting month of Ramadan in the West Bank city of Hebron, June 13, 2016. - REUTERS/Mussa Qawasma

Samia Danna, a young Palestinian woman from Jerusalem, is worried about how she will get through Ramadan this year. Danna works in Ramallah at a communications company, and the holy month has arrived while she is six months pregnant. Although Islam exempts pregnant women and others (the sick, travelers and women menstruating) from the all-day fasting ritual, Danna was worried that she wouldn’t be able to find a restaurant open from which to order lunch.

Responding to Al-Monitor by email, Danna said that she has not had a problem finding food. “While many restaurants are closed, many restaurants whose owners are Christians are open,” she reported, ticking off the names of some half dozen eateries in Ramallah that are open during the day.

In Bethlehem, the situation is no different. Jeryies Sadi’s family rents a number of shops, including a restaurant on trendy Karkafe Street. “The local government in Bethlehem has no problem with people eating on the streets, and restaurants are open here,” Sadi told Al-Monitor.

Bethlehem and Ramallah may be exceptions to the rule. With traditionally strong Christian populations and Christian mayors — Musa Hadid in Ramallah and Vera Baboon in Bethlehem — the two towns are known for having liberal and open zoning laws and policies, including on the issue of alcohol. Al-Bireh, however, Ramallah’s twin city, has strict zoning laws, and no stores sell alcohol in this Muslim-majority city.

Regulations on things like alcohol might differ, but one would expect the Palestinian central government, police and other legal branches of government to apply the law equitably. Yet the local press has published numerous stories of individuals being arrested and imprisoned for eating, drinking and smoking in public in Nablus and Tulkarm. The existence of different laws and regulations in different cities led Sadi to sarcastically refer to the “United States of Palestine.”

“I have always had problems with how the Palestinian Authority [PA] handles areas differently, which eventually will create polarization,” he told Al-Monitor. “The PA has to either prevent people from violating the sanctity of the month of Ramadan or allow people to go about their way in all districts of the country.”

In Tulkarm, the police arrested an unidentified man June 12 on charges of violating the sanctity of Ramadan and turned him over to the attorney general's office for processing. The attorney general will present the case to a judge who will decide the man’s fate. Perhaps as a nod to hard-liners, the Palestinian police posted a report on the arrest to its website and illustrated it with a large set of handcuffs.

In Nablus, the public relations department of the police issued a statement saying that on June 11 they had detained three individuals on charges of violating the sanctity of Ramadan. “We received a complaint from a citizen that a number of people were huddled behind the local vegetable market, eating and smoking,” the police statement read. “A police car was dispatched, and three individuals were arrested for publicly eating during Ramadan.”

Article 274 of the Jordanian Penal Code stipulates, “Whoever publicly violates fasting in the month of Ramadan, s/he shall be punished by imprisonment of up to one month or a fine of up to 25 Jordanian dinars [about $35].” Jordanian law still applies in Palestine unless a statute has been amended. Most Arab Mashreq countries have similar laws for those who eat, drink or smoke in public during Ramadan. Egypt and other North African countries, with the exception of Morocco, have no such laws on the books.

Sani Meo, general manager of Turbo Design and the publisher of This Week in Palestine, said polarization within Palestinian society is obvious at Ramadan. “In Palestine, we have been experiencing an increase in how people view social-religious issues, between those who are very conservative and those who are more liberal,” he told Al-Monitor. According to Meo, the more conservative wing is the more influential.

Meo's impression of increased polarization is not universally held. “The difference in treatment of citizens during Ramadan is nothing new,” Anees Sweidan, a civil servant from Nablus who works in Ramallah, told Al-Monitor. “Those who normally don’t fast are not fasting this year, and the number of those fasting is no different from previous years.”

Although many Palestinians look forward to the month of Ramadan because of the colorful customs, traditional foods (especially the Qatayef sweets, a sort of pancake with nuts or cheese soaked in syrup) and other rituals associated with it in terms of bringing people together, the holy month does have a way of exposing societal differences and pushing to the forefront issues of faith and conviction, which many people feel should remain private. That government agencies police personal choices, such as whether to fast, is seen as offensive to many although a consensus exists that one should not be disrespectful of others in as much as it is possible.

It is unclear which direction the trend is headed in Palestine. Religiosity during Ramadan is on the increase in some areas but is decreasing in others. It is also unclear whether differences in governmental approaches will remain limited or trend in a specific direction.