Ramadan no longer a month of peace, serenity in Turkey

Hate speech and aggression against those who do not observe the fast during Ramadan in Turkey spike as the government and state authorities look the other way. 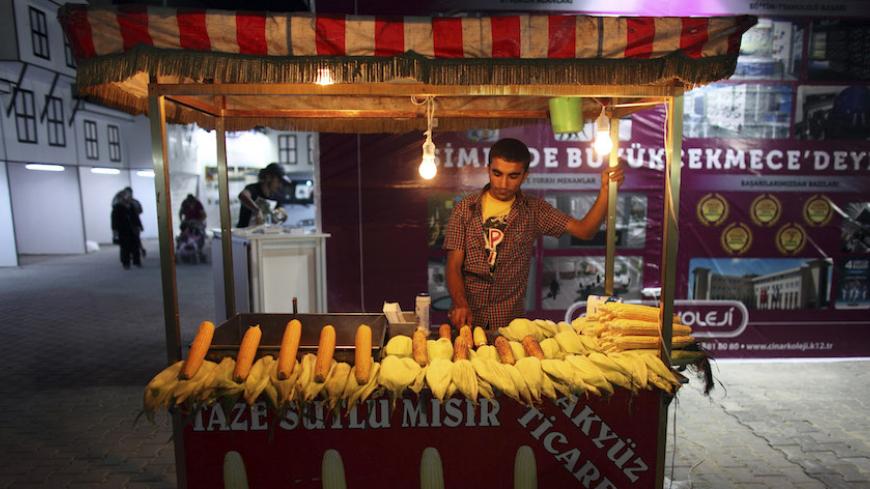 A vendor selling corn waits for customers after iftar, or the breaking of the fast meal, in Beylikduzu, a district of Istanbul, Aug. 1, 2011. Muslims around the world abstain from eating, drinking and conducting sexual relations from sunrise to sunset during Ramadan, the holiest month in the Islamic calendar. - REUTERS/Osman Orsal

On June 17, about 20 men stormed the Velvet Indieground record store in Istanbul's hip Cihangir district with sticks and makeshift weapons. The people in the store were celebrating the release of British rock band Radiohead's new album. One of those attacked told Reuters the angry mob beat victims over the head with bottles. The mob left yelling things like "This is Turkey, you cannot drink [alcohol] during Ramadan" and "Let's see if you dare to drink alcohol again, we will set you on fire."

The incident was captured and aired live on Periscope. For the next 24 hours, no one was taken into custody, even though the identities of the attackers and the threats they made were clear with video, voice recordings and eyewitness accounts. After the attack, Radiohead issued a statement to international news outlets. Residents of Istanbul — as well as others — organized a physical protest by using the social media hashtag #Cumartesi21decihangirdeyiz ("On Saturday [June 18] at 9 p.m. we are at Cihangir"). During that event, police attacked the peaceful protesters with tear gas, water cannons and batons.

There are three main reasons why people felt this protest was important. First, the threat to burn people inside a building reminded some of the horrible Madimak hotel incident of 1993, when angry mobs burned down a building full of intellectuals and artists, claiming they were atheists. Second, Turkish President Recep Tayyip Erdogan renewed calls June 17 to build a controversial historical monument in Gezi Park, a monument that evokes Islamism in many minds. The 2013 protests against the proposal left four dead and thousands wounded. Finally, the governor of Istanbul banned the LGBT honor parade scheduled for June 19.

Traditionally, crime rates in Turkey would be at their lowest during the holy month of Ramadan. Now, Ramadan has almost become an excuse for hate crimes.

Ramadan requires every able-bodied adult to refrain from eating, drinking, smoking and sexual intercourse from sunrise until sunset. However, there are many exceptions. For example, women who are sick, pregnant, nursing, menstruating or taking medication are excused. In addition, most Turkish Alevis do not observe the Ramadan fast.

This year there has been a different trend: strong hate language and aggressive attacks against non-observers, with the apparent tacit approval from government officials. This year, the violence hasn't resulted from a spontaneous burst of anger. Turkey has experienced several instances of well-planned, organized attacks by predators who are on the hunt to find and punish non-observers.

For example, on June 8 news broke that police in civilian clothing had taken smokers at a hospital garden into custody saying, "How dare you smoke during Ramadan; you must be terrorists."

Another example came June 11, when a young man made a video of himself walking down the main street of Trabzon province just before sundown, when Muslims break their daily fast during Ramadan. In the video, which went viral on social media, he said, "[I am] searching for anyone who might take a sip of water, or smoke." He told his audience, "Look around, be careful that there is no one smoking. Of course there is democracy, but this is Trabzon. If you are caught [not observing the rules] they will pull your eyes out." He continued his physical threats using graphic and foul language.

On June 12, news broke that in a small Alevi town in Adana province, a picnic organized by an Alevi nongovernmental organization, the Pir Sultan Abdal Association, and other Alevi groups was attacked by outsiders. Al-Monitor spoke with Cuma Erce, the vice chair of the association, and Kemal Derin, a lawyer and human rights activist. Both men were directly involved in the incident. Derin explained that the town is tucked in between mountains and the picnic was in a very secluded area. He said, "So these men were searching for our picnic spot. Once they found it, they started threatening." Townspeople filed a complaint with the local police, but no one was charged.

Erce said, "This was an Alevi gathering with multiple organizations. We had informed the local authorities about the gathering. We were attacked twice and threatened." He told Al-Monitor the attackers said, "It is Ramadan, why are you not fasting?" and "Now we leave, but we will be right back with guns." Having been persecuted multiple times in history on these lands, Alevis are concerned.

Derin expressed his fears, saying, "Turkey is progressing into an Islamic republic at a fast pace and the current government is doing all that it can to facilitate the process. I believe a counterrevolution has silently taken place in the secular Turkish republic. We are now at a point where whatever Islamists do, it is their right, and whoever dares to stand in their way is intolerable. Islamists get a blank check for all their misdeeds, and others cannot even speak up. That is why we hear on state television that "those who do not perform salat [ritual praying five times a day] are animals."

Prominent lawyer Erdal Dogan concurred with Derin and Erce. He said, "We now see a blatant and almost encouraged discrimination against those who are trying hard to remain secular. Religious practices have become symbols of being a part of the government, hence it is not about belief but rather conformity. The scary part is that increasing numbers of police, gendarmerie and other government employees turn a blind eye as secular groups are victimized."

Derin said that on June 12, the Turkish public was shocked to hear, on state television, theology professor Mustafa Askar labeling as animals those who do not perform the salat. Four days later, in the face of heated reaction, government sources announced that the statement had gone too far and that the TV channel would be penalized. Turkish Prime Minister Binali Yildirim and the Religious Affairs Directorate also declared Askar's words unacceptable.

Yet soon, a video of another cleric, Semsettin Ozaykan, appeared on social media. Ozaykan was discussing the proper way to punish someone who does not perform salat regularly — from imprisoning to beheading — according to different scholars.

On another TV show, the audience asked a scholar if it is "OK to execute someone who does not perform salat."

Different cases of verbal abuse toward non-observers were reported in the first 10 days of Ramadan. For example, there were reports that at an elementary school in Istanbul, teachers who were not fasting — including some who were pregnant — were scolded by the principal, who said, “You cannot eat food on school premises during Ramadan. Even the Armenians are more respectful than you are.”

How to explain this inflammatory hate speech and aggressive behavior? A scholar of international relations, Nezir Akyesilmen of Selcuk University, told Al-Monitor, "Although we do not have the data from Ramadan 2016 to compare, [with] just a simple scan of #iyicumalar [happy Friday] on social media, we see thousands of despicable slurs, slangs and slander."

Umit Aktas, a prominent writer, emphasized that the tension is mutual between those who fast and those who do not respect them. He said, "There is a general condition of intolerance as a society. It is not so much from a religious attitude that non-observers are attacked, but the root cause is the inability to accept one another. And this is a serious issue that the Religious Affairs Directorate should address promptly."

Omer Gergerlioglu, a columnist for T24 website, told Al-Monitor, "Every Ramadan we see news of violence against non-observers. Rather than reactionary interpretations, we should first resolve the issue of mutual respect of one another in society. Muslim societies must ponder the increasing tendencies toward violence in a multidisciplinary setting."

Unfortunately, in the last decade, Ramadan has become a month of spiked violence all over the Middle East. With the holy month becoming a month of rage, Turkey is crossing a dangerous threshold as well. Will the next Ramadan be a time to fast and a time to destroy?