When Jordan’s Omar Razzaz was appointed prime minister this summer, many in civil society were pleased given his longtime support for liberal causes and free speech including serving on the board of a human rights organization; however, during his time in power, Jordanian activists have faced many of the same challenges. 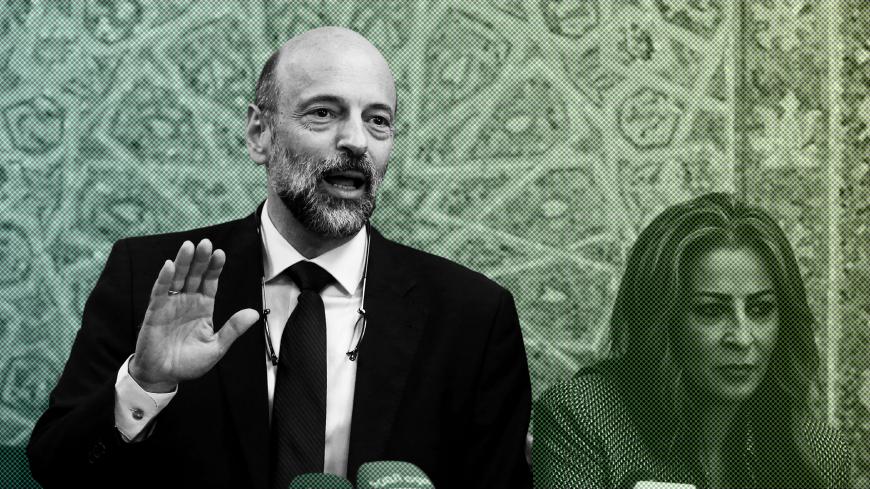 AMMAN, Jordan — Few Jordanian leaders came to power with greater support from Amman’s civil society than Prime Minister Omar Razzaz in June. He served on the board of the respected Amman-based Center for Defending Freedom of Journalists. Razzaz had called for a new social contract to advance government accountability and ensure “the rights of the electoral minority and of those with opposing views are safeguarded and not excluded or branded as treason.”

A popular education minister, Razzaz was applauded for combatting corporal punishment in schools despite the trend among some Jordanians to avoid discussing this sensitive issue. Therefore, Raed Wahbeh, chairman of Taqaddam, a progressive Jordanian platform advocating political change, told Al-Monitor that Razzaz’s appointment last summer was a “dream come true.”

But some six months following Razzaz’s selection, many activists are questioning whether his premiership will bring a tangible change for free speech and human rights in the Hashemite Kingdom. While civil liberties in Jordan under Razzaz are far better than neighboring Saudi Arabia and Egypt, activists continue facing intimidation by government officials.

Jordanian security forces shot tear gas and forcibly dispersed protesters in Dhiban, approximately 70 kilometers (43.5 miles) south of Amman, following Friday prayers on Nov. 23. The demonstrators were calling for the release of local political activists who had been arrested in a recent government clampdown.

With Razzaz as premier, the government has continued muzzling sensitive news that journalists say inhibits free speech. In September, the country’s Security Court issued a gag order restricting the publishing of news about a cigarette scandal that exposed high-level corruption. A similar gag order limiting the media was issued the next month after torrential rain killed 21 people.

As with previous governments, the Razzaz administration has restricted civil society from organizing public seminars on controversial issues. Interior Minister Samir Mubaidin banned a conference held by Mominoun Without Borders, a Moroccan-based research institution that encourages religious reform in Arab and Muslim societies. The conference was intended to focus on modern religious narratives while also including a controversial presentation on the “history of God.” The government had faced pressure by conservatives who said the conference contained “blasphemy” and “contradicts with religious values.” On Oct. 31, the Jordan Times quoted Islamist member of parliament Dima Tahbhoub as saying, “I also noticed that none of the participants are religious scholars and therefore are not eligible to discuss matters of religion.”

Similarly, the Jordanian government prevented Al Quds Center for Political Studies from holding a seminar last month on Iran’s regional role. The organizers were forced to move the conference to Beirut.

But if Razzaz had been a decadeslong supporter of liberal causes, why has his government continued to restrict free speech? Ahmad Awad, director of the Amman-based Phoenix for Economic and Information Studies, told Al-Monitor that the prime minister position in Jordan is structurally weak, unable to implement its own political agenda. Citing the institutional powers of the intelligence apparatus and the Royal Court, Taghreed Risheq, a veteran Jordanian journalist and winner of the King Hussein Award for Excellence in Journalism, told Al-Monitor, “There is a system that will implement what it wants. No matter who is the new prime minister, the system in Jordan will stay the same.”

While the security apparatus consults with the prime minister, Risheq noted they operate independently when deciding to detain activists, citing their responsibility for the country’s safety. “The people are seeing that he [Razzaz] is just like [former Prime Minister Hani] al-Mulki,” she added.

On Dec. 9, members of Jordanian civil society were initially pleased when the government withdrew a controversial cybercrimes law from parliament. Protesters near the government headquarters in Amman had charged that the bill, sent by Razzaz’s administration to the legislature in September, would restrict free speech. However, such positive momentum was quickly halted when Jordanian security forces arrested that same day Rami Sahail, a member of the Engineering Union’s Freedom Committee, for participating in protests criticizing the government.

On Dec. 10, Jordanian security detained journalist Mohammed al-Wakeel, a news site publisher, for posting on Facebook a photo of the Last Supper, which was deemed offensive. Amid the frustration, Razzaz met with activists Dec. 11 and vowed to protect freedom of expression — lofty rhetoric met with skepticism given the ongoing clampdown.

Some Jordanians expressed concern after security forces repeatedly detained Jordanians following “disturbing” parties. The interior minister detained organizers of a September event that was “harmful to public decency.” Authorities learned that the restaurant served alcohol even though organizers had submitted an official request to the Amman governorate to hold the festival without mentioning that alcohol would be included.

One month later, police raided a party in a private residence in Balqa governorate arresting four. Deema Farraj, a former TV host, asked Razzaz for clarity when security forces would clamp down on parties. “Premier Razzaz, we want to know if it is forbidden in the Hashemite Kingdom of Jordan to have mixed parties, to dance and to drink alcohol?” she wrote in a Nov. 3 tweet.

Mohammad Shamma, Journalists for Human Rights representative in Jordan, told Al-Monitor about his repeated interactions with the General Intelligence Directorate (GID). After urging the United Arab Emirates to release detained Jordanian journalist Tayseer al-Najjar in a series of November tweets, the GID called Shamma asking him to delete the posts to preserve Jordan’s friendly ties with Abu Dhabi.

That same month, the GID summoned the activist to a meeting after Shamma’s organization applied for a grant from the Dutch Embassy for a project to promote access to information. Shamma noted the message of the invasive questioning at the GID’s offices, ironically located on Street of the People (Shera’ al-Sha’b) — the message being that the intelligence apparatus “controls everything.”

Following 100 days in office, a local poll showed a decline of 27% among Jordanians who view the Razzaz government more positively than his predecessor Mulki. Fares Braizat, chairman of NAMA Strategic Intelligence Solutions and a former adviser to King Abdullah, told Al-Monitor that Razzaz suffered from extremely high expectations prior to assuming office, which were difficult to meet. Citing the detainment of the Dhiban activists, Braizat highlighted the economic crisis for Jordanians, especially outside of Amman. “There are no opportunities for jobs and that is why people are taking to the street. You have to resolve their [financial] issues rather than repress their expression,” he said.

Jumana Ghunaimat, minister of state for media affairs and government spokeswoman, did not respond to Al-Monitor’s repeated requests for comment.

Many in Amman have credited Razzaz for his impressive communication skills. After a man tried jumping off the parliamentary balcony to commit suicide in July, Razzaz left his governing duties and attempted to console the distressed individual. The prime minister has made surprise visits to an Amman hospital to gain a more accurate understanding of citizens concerns. Instead of being dismissive like previous premiers, Jordanians have appreciated his willingness to empathize with citizens’ economic grievances. Nonetheless, activists who have faced years of government pressure have become disappointed that Razzaz has failed to advance significant progress for civil society with little tangible improvement amid longstanding economic woes. “The prime minister is a modest guy. He is clean and communicates more frequently with the population,” Marwan Muasher, former Jordanian foreign minister, told Al-Monitor. “But in the end the character of the prime minister is not enough to solve the problems of the country."