The Jordanian government issued a decision recently to allow Gazan refugees to buy and own property and vehicles, which was not welcomed by some who see this as a move aimed to permanently settle refugees in the kingdom. 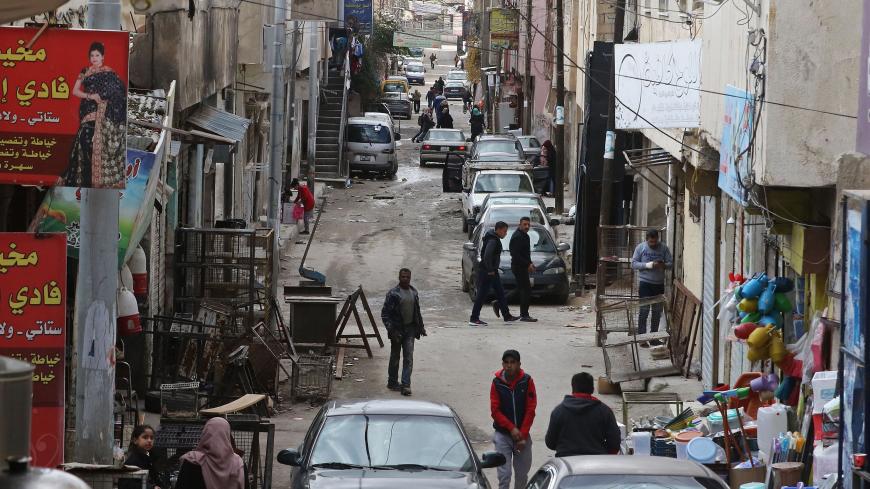 At a time when Jordanians are protesting the government’s economic policies and accusing it of failing to address domestic challenges, Prime Minister Omar Razzaz moved to alleviate pressure on one of the kingdom’s most underprivileged communities, Gazans refugees.

Praised by most and viewed with skepticism by a minority, the Cabinet decided Dec. 3 to allow the kingdom’s more than 150,000 Gazan refugees to own property and certain types of vehicles. The move came after members of the Lower House had called on Razzaz a month earlier to look into the plight of Gazans living in Jordan who are denied basic civil rights. Previous governments had balked at taking similar steps in the past for fear of a backlash by those — mainly right-wing nationalists — who may accuse them of settling Palestinians in the kingdom.

The government decision allows heads of Gazan families to own some form of property and own diesel-run cars, under certain restrictions limited to land size, and Gazans who hold a two- or five-year Jordanian passport and who are not entitled to citizenship.

Government spokeswoman Jumana Ghunaimat did not return calls from Al-Monitor to comment on the government’s decision. On Dec. 4, Razzaz told parliamentarians that the government “will study all demands made by Gazans who suffer as a result of loopholes in services provided to them.”

On June 23, representatives of Gazans living in Jordan — 30,000 of whom reside in a refugee camp on the outskirts of Jerash, 60 kilometers (37 miles) north of Amman — sent a letter to Razzaz outlining their difficult humanitarian situation. They said that they are barred from working in any government body; denied work in 18 private sectors such as tourism, law and health; have no access to government health insurance; cannot register property to their names; have to pay double university fees compared to Jordanians; have to pay for a work permit; had fees for their temporary two-year passport raised from 25 Jordanian dinars ($35) to 100 dinars ($141); have to pay triple what Jordanians pay to renew their driver's license; and get no support from the Palestinian Authority, among other complaints.

These conditions do not apply to Palestinian refugees from the West Bank.

In response, the government formed a committee in September to register Gazans living in Jordan. Official figures vary over their actual numbers putting them between 120,000 and 150,000, while the United Nations estimates that there are about 158,000 so-called ex-Gazans in the kingdom.

Unlike most of Jordan’s estimated 2.2 million Palestinian refugees registered with the UN, Gazans living in Jordan have no access to Jordanian citizenship, while West Bank residents can claim citizenship rights. The West Bank was part of Jordan until the 1967 Arab-Israeli War, while the Gaza Strip was administered by Egypt. Egypt does not recognize their right to reside in its territory.

She said that Gazans are treated by Jordan as Arab foreigners and pay taxes whenever they interact with the state. “The passport they hold is in effect simply a residency permit, the renewal of which is left to the discretion of the state. Gazan men cannot renew their residency permit without clearance from the Jordanian security authorities. Their administrative vulnerability can lead to curtailment of rights to political participation and membership of trade unions enjoyed by Jordanian citizens,” Abed said.

The recent government move has raised questions about the timing and purpose. Hassan Barari, professor of political science at the University of Jordan, told Al-Monitor that the decision had nothing to do with the possible settlement of Gazans in Jordan or to pave the way for granting them citizenship rights. “These are humanitarian steps to make life easier for Gazans who will not return to their homeland anytime soon,” he said.

Barari added, “As long as their constitutional and legal status does not change, they are treated like any other Arab resident."

Omar Kullab, a Gaza-born journalist and head of an ad hoc committee to follow up on the claims of Gazans in Jordan, told Al-Monitor that the government has moved in the right direction, but more was needed. “We had submitted 16 demands to the government and only two were approved,” he told Al-Monitor.

“We had avoided making claims to practice our civil rights at the level of municipal elections and underlined instead the need to open up employment in all areas in the private sector, abolish the requirement for a work permit and include Gazans in state-run health insurance,” Kullab noted. “The prime minister had promised that he would look into these demands.”

On Dec. 5, political columnist Fahd al-Khitan wrote in daily Al-Ghad that it is understandable that the recent decision will create some controversy. “There are certain social elements that are afraid of the future repercussions of such moves and classify them under ‘soft settlement’ [of Palestinians in Jordan],” he wrote. “But we should differentiate between civil and political rights and how to manage ties between various elements of Jordan’s social components without sacrificing the kingdom’s tough stance in support of Palestinian brothers.”

Writing in Ad-Dustour daily on the same day, columnist Maher Abu Tair defended the government’s decisions saying that they had nothing to do with “liquidating the Palestinian cause, the Jordanian option [the far-right Israeli claim that Jordan is Palestine] or [US President Donald Trump’s] 'deal of the century.'”

He continued, “We should not look at every step that seeks to provide an honorable life to a deprived component of our society as a conspiracy against the country.”

Some viewed the latest decisions as purely economic in nature aimed at attracting investments from thousands of Gazan entrepreneurs who had done well in Arab Gulf countries and would like to have a base in the kingdom. The right to buy property by Gazans is expected to give the ailing Jordanian economy a much-needed push as the Treasury collects 10% of the value of the property upon registration.

So far, public opposition toward the government move to improve the lives of Gazans in Jordan has been subdued. This may encourage Razzaz to adopt additional steps as he had promised. Echoing positive sentiments, Abed said, “Until such time as a Palestinian state is established, stateless Gazans should not be forced to live in limbo, left outside conventions that should ensure their human and civil rights.”