Palestinian Jerusalemites hope that Jordan's announcement of a reduction in passport fees for them, and an easier application process, signal an effort by Amman to become more involved in defending their rights. 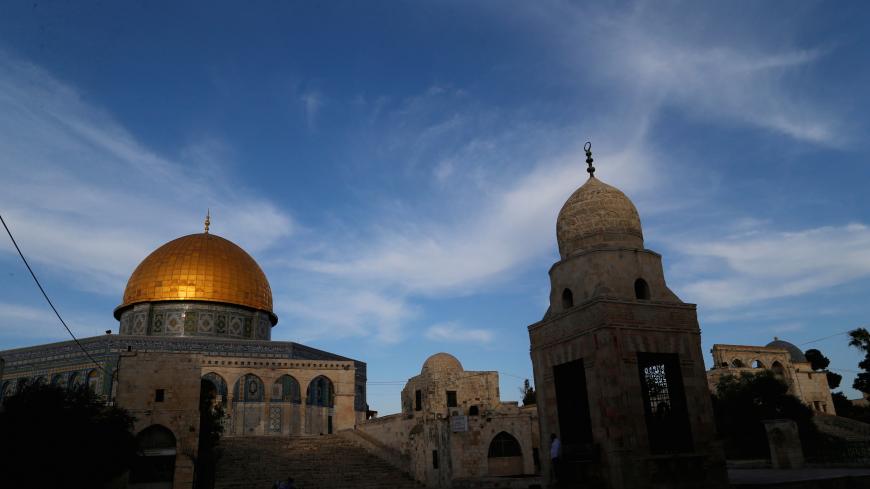 The Dome of the Rock is seen during sunset on the compound known to Muslims as al-Haram al-Sharif and to Jews as Temple Mount in Jerusalem's Old City, May 17, 2017. - REUTERS/Ammar Awad

The Jordanian government's decision to reduce fees on passports for Palestinians in Jerusalem has revived hopes of a larger role for the kingdom in defending the rights of Jerusalemites.

On Sept. 4, the Civil Status and Passports Department (CSPD) reduced passport fees from 200 Jordanian dinars ($281) to 50 dinars ($70) and allowed Jerusalem residents to apply for passports from the city instead of having to travel to Jordan.

CSPD Director Fawaz Shahwan told Al-Monitor that the decision was taken to help ease life for Jerusalemites. “Starting Sept. 4, Palestinians in Jerusalem can go to the Islamic [Waqf] courthouse in Jerusalem, apply for a new or renewed passport and within a week have the newly issued passport delivered to their homes,” Shahwan said. He noted that an agreement between Jordan Post and the Wasel Company, a Palestinian package delivery service, has helped facilitate the delivery of official documents.

Wasfi Kilani, executive director of the Hashemite Fund for the Restoration of Al-Aqsa Mosque and Dome of the Rock, told Al-Monitor that the decision to reduce passport costs was part of a broader attempt to support the “sumud” (steadfastness) of Jerusalemites. “With clear instructions from His Majesty, King Abdullah, we have been working on a comprehensive plan that aims at strengthening the presence of our people in Jerusalem,” Kilani said.

According to Kilani, in a further testament to Amman's support, the number of Palestinians on the payroll of Jordan's Jerusalem Islamic Waqf has risen. “Today we have 1,000 people who are on the payroll working as guards, tour experts, administrators and public relations employees in Jerusalem,” he remarked. Last year, the number stood at about 800.

Jordan's increased interest in the status of Palestinians in Jerusalem has been well received. The Sept. 10 broadcast of “Eye on Jerusalem,” a weekly program on Jordan Television, reflected widespread support from both public and private individuals in the city.

Hanna Issa, secretary-general of the Islamic-Christian Council for Jerusalem, told Al-Monitor that there is widespread appreciation in the city for the Jordanian gesture in support of Jerusalemites. “The importance of this gesture addresses both daily needs and the political situation,” Issa said. “With such interest by the Jordanian kingdom in Jerusalemites, this will go a long way in protecting our people from the threat of expulsion.”

Calls by Palestinians in Jerusalem are being heard for the renewal of a larger political role for Jordan in the city to fill the vacuum that causes major problems for the city’s 330,000 residents, who are often in a position of being political orphans.

Although Jerusalem, like the rest of the West Bank, was included in the Hashemite kingdom's unification act (1950), its legal status was upended by the Israeli occupation in 1967 and later by the Palestinian intifada leading to Jordan's decision to sever administrative ties with the West Bank in 1988.

The issue of the holy places, including Al-Aqsa Mosque and the Church of the Holy Sepulcher, was coordinated by Jordan and the Palestine Liberation Organization, as Jordan had previously had special, custodial status over the holy places. Jordan was also guaranteed retention of its special role in its peace treaty with Israel. Jordan’s Islamic Waqf continues to operate in Jerusalem, and Jordanian-paid guards help protect and manage Islamic sites.

The sensitive issue of the holy places was further regulated in an agreement signed in Amman in April 2013 by Palestinian President Mahmoud Abbas and King Abdullah. The human side of the issue, however — the political rights of Jerusalemites — was left unresolved.

Jordan’s latest move regarding passports has triggered public debate in Jerusalem revolving around the idea of Amman exempting Jerusalem from the 1988 decision to severe political and administrative ties.

Tareq Khoury, a member of Jordan’s parliament representing Zarqa, which has a large number or residents of Palestinian origin, told Al-Monitor that he has always been opposed to the 1988 decision to severe relations with the West Bank.

“As a pan-Arabist, I am in support of all actions that unify Arabs,” Khoury said. He added that the issue of Jerusalem is sensitive. He calls for re-establishing Jordanian administrative ties over it, but recognizes that this must be thoroughly studied and would need to be coordinated with the Palestinian leadership.

Jerusalem’s political orphans are crying out for help. The Jordanian and Palestinian leaderships must exert the time and effort to coordinate with local Jerusalem leaders to find a way to ensure that any decision taken will help support the sumud of the people of Jerusalem.