Only a few thousand of the more than 600,000 registered Syrian refugees have returned home from Jordan since the war started in 2011, sparking fears about the kingdom’s capacities to bear the costs of hosting. 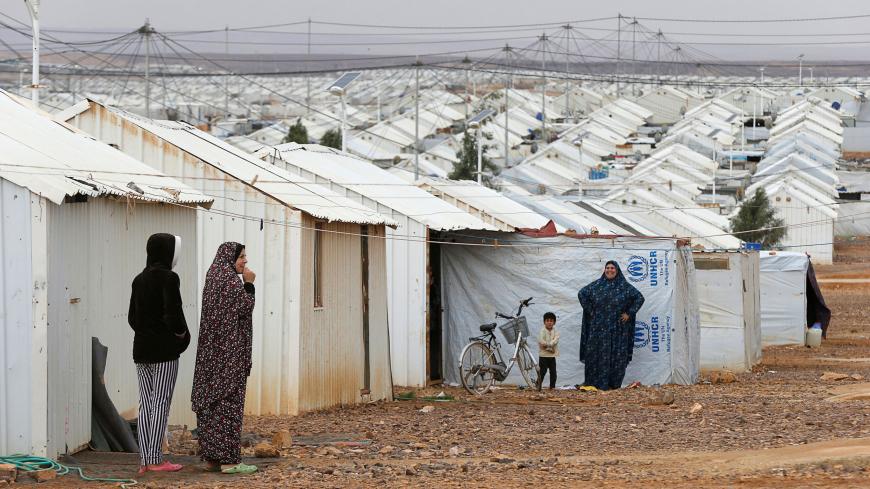 More than eight years after the Syrian refugees began pouring into Jordan and five months after a vital land border point was reopened between the kingdom and Syria, only a few thousand of the registered 600,000 have returned to Syria. On March 5, Foreign Minister Ayman Safadi was quoted as saying that the number of Syrian refugees who have returned to Syria was no more than 13,000. He called on the international community to bear its responsibility toward Jordan as it continues to provide an “honorable life” to Syrian refugees despite the country's difficult economic situation.

On March 7, Syria’s official news agency reported that the border point between Jordan and Syria had received 14,200 Syrian refugees since it was reopened Oct. 15.

Jordan is hosting more than 1 million Syrian refugees, but only half are registered with the United Nations and not all the refugees live in camps. The government has said that hosting the refugees has burdened its budget and stretched its resources.

At a meeting in Amman Feb. 20, donor countries and international organizations endorsed a $2.4 billion aid package for the Jordan Response Platform for the Syrian Crisis for 2019. “Of the funding requirements, $702.9 million is allocated for refugees, while $698.9 million is set to support host communities and the remaining $998.2 million is assigned for budget support,” The Jordan Times reported.

Prime Minister Omar Razzaz was quoted as saying that “despite the tremendous impact the war in Syria had on Jordan, we have demonstrated our readiness to provide safety and dignified living conditions to hundreds of thousands of Syrian refugees. We will continue doing so and count on your unwavering support as we redouble our efforts to strengthen our resilience.”

But he also noted that since conditions for the return of the Syrian refugees to Syria are not clear, the refugees do not have “the desire to return anytime soon to their country.”

Jordan is worried by two main factors: political impasse in Syria and donor fatigue. The longer it takes for a political settlement to the Syrian crisis to materialize, the longer the Syrian refugees will remain in the kingdom. Most Syrian refugees are hesitant to return to their country for fear of retribution by regime loyalists and the fact that the eight-year civil war in Syria has destroyed hundreds of villages and towns. Simply stated, many of the refugees have nowhere to go.

One former minister, who requested anonymity, told Al-Monitor that Jordan is already feeling donor fatigue with regard to aid to support the Syrian refugees. He said that Jordan had hoped to get more than $4 billion in refugee aid for 2019.

“With the humanitarian crisis in Yemen and elsewhere donors have many urgent priorities,” he said. But he believes that the Syrian refugees have helped the Jordanian economy grow, especially by increasing public consumption. He added that the presence of international aid agencies in the kingdom has provided jobs to hundreds of Jordanians. Syrians who do not live in refugee camps pay rent, use public services and run small businesses, he said.

According to the UN refugee agency, UNHCR, 83% of Syrian refugees live in host communities in the kingdom compared to only 17% who live in refugee camps. In July 2018, the Ministry of Labor reported that it had issued 106,000 work permits for Syrian refugees so far, while the number of workers in the informal economy remains at an estimated 300,000.

Khaled al-Zubaidi, business editor at Addustour daily, told Al-Monitor that the presence of about 1.3 million Syrians in Jordan had positive and negative consequences on the local economy. “The economy grew as a result of an increase in consumption and due to investments in factories and small businesses such as restaurants,” he said. “But our infrastructure has suffered especially in crowded schools and in providing health services.”

Zubaidi said that eventually the refugees must return to Syria, which is in Jordan’s national interest since foreign aid does not cover all the expenses of hosting them.

According to pollster Fares Braizat, a survey conducted by NAMA Strategic Intelligence Solutions in November 2018 found that 33% of Syrian refugees said that they “will never go back” and 24% said they “probably will not go back.” On Dec. 8, Braizat wrote in The Jordan Times that 87% of Jordanians polled believe that the Syrian refugees should return to Syria.

Political commentator Omar Kullab told Al-Monitor that Jordan’s biggest concern is that the Syrian government is not serious about welcoming its refugees back at this stage. “We should resist any plan to settle these refugees in the kingdom either for a short period or longer,” he said. “Those living in camps can be dealt with through foreign agencies and by giving them incentives to return voluntarily to Syria, but what about the hundreds of thousands of Syrians who have settled in various governorates and have found means to make a living?”

In his view, those living outside the camps will become the core of a demographic crisis, especially as Jordanians continue to suffer from high unemployment and a sluggish economy.