Jordan’s decision to require work permits for Palestinians holding temporary passports on its territory will further add to their economic and social suffering. 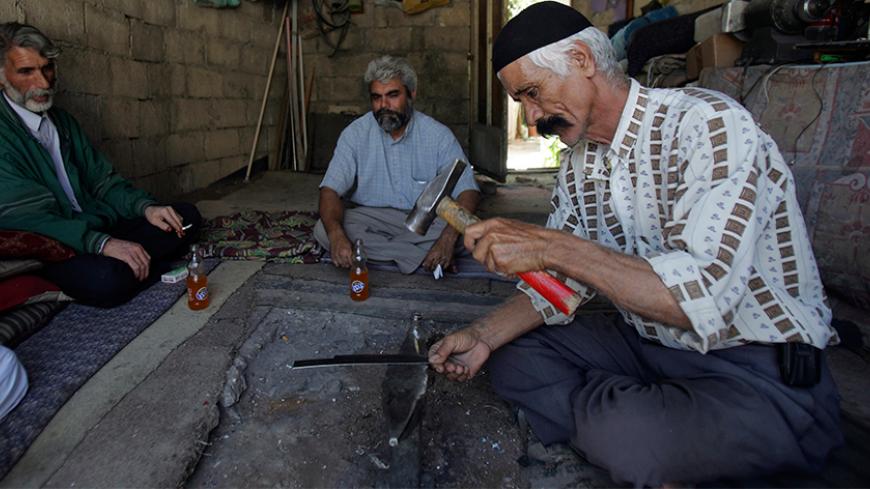 There are about 2 million Palestinians in Jordan, and the kingdom treats them as two different groups. The first arrived in Jordan after the 1948 war. The United Nations High Commissioner for Refugees defines them as refugees, and they have Jordanian citizenship.

The second group arrived after the 1967 war. Defined as “displaced persons” who came from the West Bank and the Gaza Strip, they do not enjoy full citizenship and hold a temporary Jordanian passport that must be renewed every two years. They cannot work in state institutions, but only in the private sector without official work permits from the government.

The Jordanian state started distinguishing between refugees (who have Jordanian citizenship) and displaced persons (who hold a temporary passport) after Jordan's late King Hussein bin Talal announced the disengagement between Jordan and the West Bank at the request of the Palestine Liberation Organization in 1988.

On Jan. 9, Jordanian media outlets reported that the Jordanian government had decided Jan. 6 to collect work permit fees from the 1967 Palestinians, who number around 110,000 workers. The fees’ value amounts to 180 dinars ($250) per person.

However, on Jan. 23, Jordanian Labor Minister Nidal Qatamin announced that the decision to collect fees had been revoked following a number of objections. Meanwhile, the living conditions of Palestinians from the West Bank and Gaza in Jordan keep deteriorating.

Although the Jordanian government rescinded, the decision to require work permits for Palestinians remained, especially for the later-arriving Gazans.

A Labor Ministry source told Al-Monitor on condition of anonymity, “The decision resolves a legal problem, as it allows Palestinians holding temporary passports in Jordan to work legally. Prior to the decision, they were prevented from officially working in the private sector and those who did were considered to be in violation. This decision came to legally regulate their work and preserve their financial rights.”

Jordanian researcher Nadia Saad Eddin wrote a report in 2013 about the status of Palestinian workers in Jordan. In her report, she stated that the Palestinians have to abide by legal restrictions, which have resulted in high poverty and unemployment rates among this population in Jordan. This group is not allowed to work in the Jordanian government or engage in some professions such as dentistry, agricultural engineering, accounting, pharmacy, tourism and banking.

Also, according to Saad Eddin, the private sector offers few work opportunities, while Palestinians have to gain security clearance before taking up any job. The criteria are based on both the internal regulations of the Jordanian syndicates and the conditions of the Jordanian Interior Ministry.

In this regard, Palestinian Ali Salem from Jordan's al-Zarqa camp told Al-Monitor, “This decision is unacceptable. I have been living in Jordan for over 40 years; how is it possible to treat me like any other worker coming from China or the Philippines? I consider Jordan to be my second home after Palestine.”

The Jordanian decision has been widely rejected. In an article published in the Jordanian newspaper Ad-Dustour Jan. 10, Jordanian author Omar Kallab said that as Gazans in Jordan support their families in the Gaza Strip, this decision further burdens them and their families.

Yasser Yzaatreh, another renowned Jordanian author, wrote in his article for Ammon News Jan. 14 that the decision is absurd, as Gazans in Jordan are treated as foreigners who come to Jordan for work only.

Many Gazans in Jordan are questioning the fairness of treating them as foreign migrant workers when their situation is completely different. Palestinians who have been residing in Jordan since before 1967 are permanent residents, while migrant workers come and leave according to their job requirements, staying in Jordan for only a few years. Does this mean those who carry temporary passports will be forced to work in professions reserved for foreigners and penalized if they work in other professions? Although there are no official lists of the fields they are allowed to work in, Palestinians have been living in Jordan for so long that they know which fields they can enter and which they cannot.

Ahmed Awad, director of the Phenix Center for Economic Studies and Informatics in Amman, told Al-Monitor, “Jordan’s decision reflects a negative radical change in Jordan's policy toward Palestinians. There are 300,000 Gazans and 500,000 Palestinians from the West Bank in Jordan. According to this decision, [Palestinians who are able to work] would have to get a work permit to be able to work legally. The decision includes dozens of professions in the Jordanian private sector, such as the medical field, engineering and accounting. This puts Palestinians in the same category as other foreigners living in the kingdom.”

Awad added, “If Palestinians are forced to get work permits, they could [choose] not to and work illegally; employers would also exploit them and deprive them from social security benefits. All this would force them to migrate and seek other job opportunities abroad.”

On Jan. 14, Khamis Atiyeh, the second deputy speaker of the Jordanian Parliament, demanded that the Jordanian labor minister “revoke [the decision requiring] work permits for Palestinians, as they have been living in Jordan since 1967 and cannot return to their country due to the Israeli occupation.”

Remarkably, the Palestinian Authority remained silent and did not intervene, although the decision affects Palestinians in Jordan. Perhaps it wanted to avoid tension with Jordan in light of the deterioration of the countries' ties following the Jordanian-Israeli agreement on Oct. 25, 2014, to install cameras inside Al-Aqsa Mosque. The agreement was signed by Jordan and Israel without the PA's involvement.

Al-Monitor tried to contact Palestinian officials for comment on the Jordanian decision, but they refused to share an official position out of fear of harming the PA’s relations with Jordan. However, Jordanian author Oraib al-Rantawi, who has strong ties with the PA, wrote in a Jan. 25 article that the Jordanian government’s decision to require work permits for the 1967 Palestinians has placed a group that had been living in Jordan for decades in the same category as foreign expats.

Rantawi further stated that the decision has stirred anxiety, uncertainty and instability among Palestinians without any convincing political, economic or security justification.

Issam Adwan, head of the Hamas-affiliated Refugee Affairs Department in Gaza, told Al-Monitor, “Jordan’s decision means that Palestinians have become strangers to the kingdom, and this is unacceptable. In 1966, the Arab League issued a decision binding Arab states to treat Palestinians as local citizens. The [Jordanian] decision reflects discrimination, as a large part of Jordanians that have Jordanian nationality are from Palestinian origins. It could also harm the social cohesion in Jordan [and create a rift] between a Palestinian working without a permit and another who needs one.”

“Is it possible that Jordan — which accommodates 1 million Syrians and 1 million Iraqis — is unable to accommodate the hundreds of thousands of Palestinians who carry temporary passports, even though they have spent more than 48 years there? Jordan should treat them as Jordanians and grant them their full rights, because forcing them to obtain work permits is not an act worthy of Jordan,” Adwan added.

Palestinian and Jordanian circles continue to call on the Jordanian government to retract the decision. The Palestinian camps in Jordan are overpopulated, and poverty and unemployment run rampant. The crisis between Palestinians in Jordan and the Jordanian authorities may be aggravated, which could raise new issues that both sides could do without in light of the escalating security tensions among Jordan’s neighbors, such as Lebanon, Syria and Egypt.