Why is Jordan preventing Gazan refugees from doing their jobs?

The Jordanian Ministry of Education is implementing a decision to ban Gazan teachers in Jordan from continuing to teach in Jordanian schools. 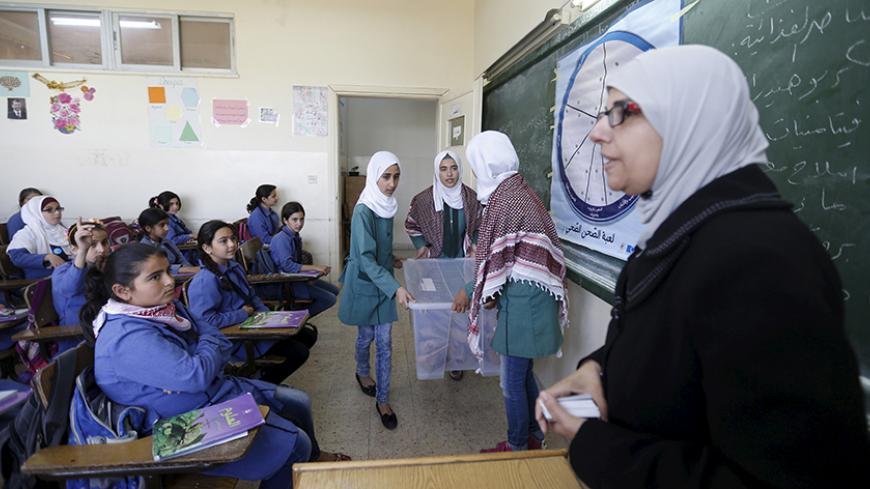 A teacher distributes meals to students as part of a World Food Programme-run project to provide healthy meals to students and to raise awareness of good eating habits, at Hofa Al-Mazar school in the city of Irbid, Jordan, April 26, 2016. - REUTERS/ Muhammad Hamed

There are nearly 158,000 Gazan Palestinians who arrived in Jordan following the 1967 Arab-Israeli war, and they hold temporary Jordanian passports, according to statistics of the United Nations Relief and Works Agency for Palestine Refugees in the Near East in 2015. Restrictions have been imposed on these Palestinians under Jordanian law, in terms of the right to own properties, work, receive medical treatment, study and join trade unions, which have resulted in high poverty and unemployment rates, the Phenix Center for Economic and Informatics Studies in Amman wrote in its 2013 economic report.

An informed Jordanian source at the Ministry of Education, who declined to be named, told Al-Monitor, “Before the start of the academic year in September, the ministry demanded that private educational institutions refrain from renewing employment contracts with non-Jordanian teachers, which amount to 800 teachers of Gazan origin. The decision is not limited to teachers. It also includes drivers, administrators, office boys and guards.”

Jihan Ali, a Palestinian teacher in the Gaza refugee camp, spoke to Al-Monitor over the phone. She said, “I have worked for 15 years as a teacher in Jordanian private schools without a problem. Yet I was surprised in mid-September when the school asked me to go to the Jordanian Ministry of Labor for a work permit. It was the first time that I was asked to do so. The Ministry of Labor refused to issue the permit, due to the decision to ban non-Jordanians from practicing the teaching profession. It has been weeks since I had a job, although I provide for my six orphan brothers and sisters.”

The Jordanian decision against Gazan teachers has coincided with a message, dubbed “the most urgent needs of Gazans,” addressed by Gazan residents of Jordan to the official authorities in Amman on Oct. 31. The message called on the authorities to exempt them from the treatment costs for incurable diseases, to exclude them from the Cabinet decisions on foreigners, to increase the number of seats for Gazan refugees in public universities, to allow them to apply for a job in government universities and to allow [Gazan] physicians, pharmacists, nurses and lawyers to obtain a license to practice their professions and work.

Former Palestinian Refugee Minister Atef Adwan told Al-Monitor, “The Jordanian decision against Gazan refugees in the kingdom has pure political goals to pressure the Gaza Strip. Had it been administrative or technical, it would have included all Palestinians from the Gaza Strip and the West Bank. Yet the decision is a continuation of the previous Jordanian policies against Gazans, including the decision to prevent Gazans from entering Jordan in May. These Jordanian measures distance the Jordanian and Palestinian peoples from each other and strengthen the siege on Gazans at home and abroad.”

Omar Kallab, the head of the committee for Gazans living in Jordan, told Al-Monitor, “The problem for Gazan refugees does not only reside in the decision to ban them from teaching. The decision is a consequence, not a reason. The main reason is the Jordanian decision that was issued in January 2016 to equate Gazan Palestinian refugees who have been residing in Jordan since 1967 with the newcomers to the kingdom by requiring them to obtain work permits. Thus, they no longer have access to 18 professions, most notably teaching and health-care professions.”

Palestinian refugees from the Gaza Strip, who hold temporary Jordanian passports, opened a Facebook page where they expressed their rejection of the Jordanian decision and considered that it is designed to target them. They also listed the unjust Jordanian restrictions.

Yahya al-Saud, a member of the Jordanian parliament, called Oct. 22 on Prime Minister Hani Al-Mulki to give Gazans their civil rights and facilitate their right to acquire properties, to invest and have insurance. In fact, people from the West Bank live in Jordan under circumstances that are much better than what Gazans experience.

The Jordanian decision has shed light on the most prominent problems faced by Palestinian refugees in Jordanian camps, such as the poor housing conditions with tiny spaces and overcrowded houses, where Palestinian families resort to primitive heating means. Also, 11% of the houses in the camps are damaged, uninhabitable, and may collapse and put residents’ lives at risk.

Shaker al-Jawhari, a Jordanian political writer and editor-in-chief of Al-Mustaqbal al-Arabic news site, told Al-Monitor, “The Jordanian decision is 100% wrong. Yet most of the decisions in Jordan are taken randomly, without taking into account their negative consequences and effects. These expected effects include the presence of hostile parties that may take advantage of this decision, pay those who were dismissed from the teaching profession and exploit them to tamper with the Jordanian security.”

He added, “A powerful current within the Jordanian authorities is demanding that Syrian refugees be accommodated in the kingdom, even though it is at the expense of Gazans. The latter arrived in Jordan 50 years ago due to the Israeli occupation, and there is no way they can return home. This is while the Syrians, Iraqis and others have the possibility to return to their country of their own free will whenever they want to.”

The popular and official efforts in Jordan continue to be deployed in order to abolish the decision against Gazan refugees. Yet it is still unknown whether or not the kingdom will retract its decision. The decision reveals the renewed suffering of Gazan refugees in Jordan. Although they have served the kingdom, they are losing their job security, while the Jordanian official authorities have remained silent on the reasons behind the decision and refrained from giving any statements on whether or not the government will retract its decision.