Who’s to blame for deaths in Jordan flood?

Jordanians held the government responsible for the Dead Sea incident that claimed the lives of 21 people, including 15 children. 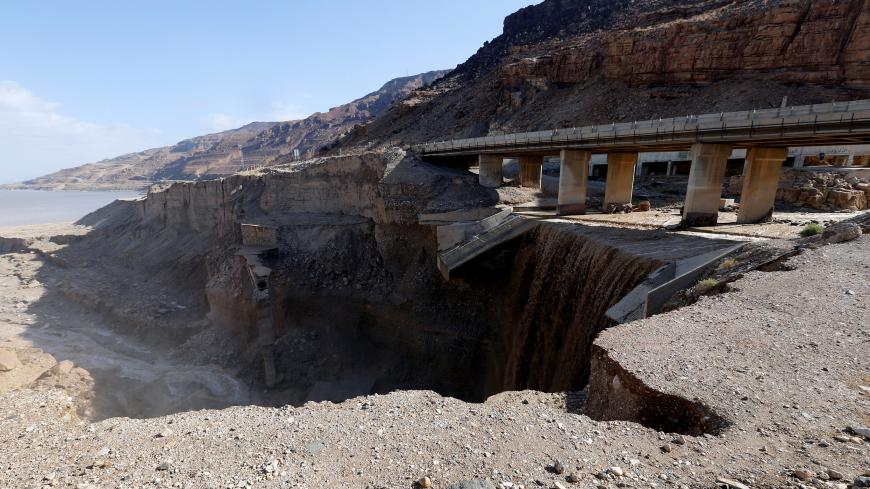 A general view shows the location of the accident where rain storms unleashed flash floods, near the Dead Sea, Jordan, Oct. 26, 2018. - REUTERS/Muhammad Hamed

Jordan’s Minister of Tourism Lina Annab and Minister of Education Azmi Mahafza submitted their resignations Nov. 1, becoming the first political casualties of one of the kingdom’s deadliest incidents in decades.

On Oct. 25, 37 children from an Amman private school, accompanied by seven adults, were on a school outing in the Zarqa Ma’in gorge when flash floods swept away dozens of people, some as far away as the Dead Sea. The floods killed 21 people, including 15 school children, and injured dozens. Local residents, civil defense, police and army personnel took part in a large search and rescue operation that continued late into the night and the next day.

The tragedy of “Black Thursday” shocked Jordanians nationwide and forced a saddened and angry King Abdullah to cancel a planned visit to Bahrain the following day. The UN secretary-general and several world leaders sent condolences.

Chairing a National Policies Council meeting Oct. 27, the king said, “I and all Jordanians are bereaved by this tragedy.” He called for “drafting a report that determines what took place, stressing the need for transparency to identify who should be held accountable.”

Prime Minister Omar Razzaz told lawmakers Oct. 30 that his government should bear the “administrative, procedural and moral responsibility” for the incident. Razzaz has been under pressure from the public and deputies to fire ministers who were blamed for failing to take measures that could have prevented the tragedy.

The resignations of Annab and Mahafza, which have yet to be accepted, may force Razzaz to reshuffle his Cabinet for the second time in a month. Deputies may still demand more ministerial resignations, which could put the fate of the government in jeopardy. The head of a parliamentary fact-finding committee issued a statement Nov. 1, saying that the interrogation of ministers revealed “a dereliction in the performance of ministries.”

After the floods, Jordanians were quick to point the finger at various ministries for failing to take measures to prevent the deaths. The Jordan Meteorological Department had issued an advance warning of heavy rainfall and possible flooding in low areas. The incident took place at the lowest point on earth, in a gorge that frequently witnesses flash floods after heavy rainfall.

But in the wake of the tragedy, the ministers of education, tourism, health and public works were quick to deny responsibility for the incident. A bridge near the area had collapsed under the force of gushing water, which had carried boulders from the riverbed. The bodies of most victims were deformed, making it hard for their families to identify them. The Ministry of Water and Irrigation denied on Oct. 27 news reports and social media claims that that the ministry had opened the gates of a new dam near the area of the incident, causing the flash flood.

Under public pressure, the government announced Oct. 25 that it would open an investigation and hold accountable those responsible for the incident. Minister of State for Media Affairs Jumana Ghunaimat told the Jordan Times that “it is clear that there is a violation. The school, which organized the trip, did not abide by public safety regulations which stipulate that students must not swim and must be kept away from waterways.”

But Jordanians, especially on social media, rejected the government's offer to investigate its own culpability. The Lower House of Parliament decided Oct. 30 to form its own investigation committee into the Dead Sea tragedy, while the public prosecutor initiated a separate inquiry into the incident.

But Ammon News reported Oct. 31 that King Abdullah would call for an impartial committee, including representatives of the victims' families, to be formed soon.

Apart from the grave humanitarian loss felt by Jordanians, the tragic incident also overshadowed the king’s historic decision Oct. 21 to terminate parts of the kingdom’s peace treaty with Israel. The move — hailed by Jordanians as a national victory — would have given the Razzaz government a short reprieve from public criticism over its economic policies.

Now the government finds itself under scrutiny as a number of lawmakers called on Oct. 28 for the resignation of the ministers of education and tourism.

Following the tragic incident, a number of Jordanians mocked and insulted the victims and their families on social media, claiming they were members of the upper class because they sent their children to private schools. The cybercrimes unit of the Public Security Directorate referred six Jordanians to the public prosecutor Oct. 28 for posting messages on social media that spread hate speech and insulted the victims of the Dead Sea incident and their families.

Expressing rage, the king published a lengthy article Oct. 31 in all Jordanian dailies, titled “Social or Anti-Social Media.” He wrote, “What we witnessed lately with the Dead Sea incident — which has caused deep pain to us all — and some of the commentary that followed indeed prove that this anchor [social media] has been shaken. We must differentiate between those who criticized performance and called for identifying the responsible parties and between those few who have been offensive to the memory of the children we have lost, which makes us question the basis of their relationship with society and the goals behind this negativity that has, unfortunately, robbed them of their humanity. We must also question who is behind these opinions that are far removed from the values of our society.”

The king’s article came as lawmakers prepared to debate controversial amendments to the cybercrime law this month. The amendments will tighten penalties against purported hate speech, but activists say it will limit freedom of expression.

Stories of heroism also emerged from the Dead Sea tragedy. An off-duty diver with the Civil Defense Department, Zaher al-Ajalin, was hailed as hero when he personally saved the lives of five people and retrieved the bodies of another four.

Meanwhile, Jordanians await the results of the fact-finding committee, though some are skeptical. Writing in al-Ghad daily Oct. 31, Fahed al-Khitan, a political columnist, said that even though at least three investigations are taking place and lawmakers are demanding the firing of those responsible, Jordanians can't help but be reminded of the numerous committees formed in the aftermath of previous national crises that have been forgotten or side-stepped. Such attitudes deepen the public's distrust of governments, but this time, we can’t afford not to act, he wrote.