Jordan’s King Abdullah II swore in the new government of Bisher al-Khasawneh amid a series of economic and health challenges facing the kingdom. 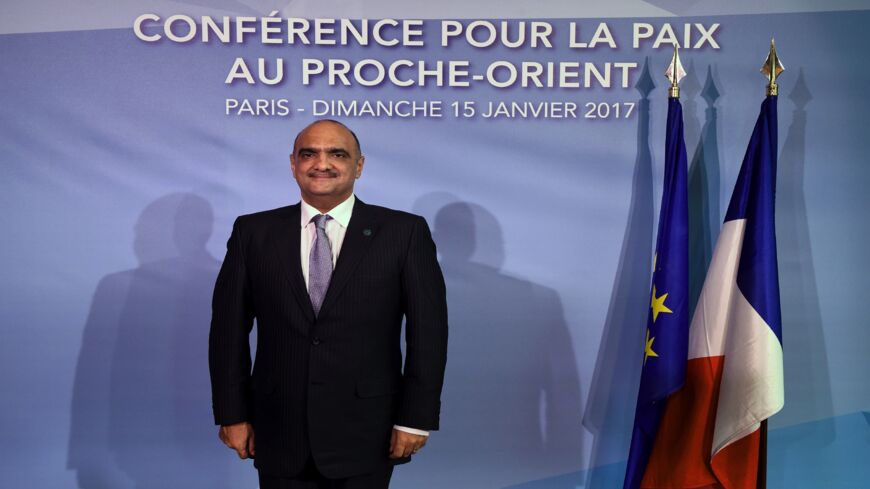 Jordan's Foreign Minister Bisher al-Khasawneh poses as he arrives for the Mideast peace conference in Paris on Jan. 15, 2017.

A new Jordanian government, headed by Bisher al-Khasawneh, was sworn in before King Abdullah II on Oct. 12, more than a week after the king accepted the resignation of the government of Omar Razzaz. The monarch had dissolved parliament on Oct. 3, at the end of its four-year term, which meant the Razazz government had to resign within a week, as stipulated by the Jordanian Constitution.

Khasawneh, 51, spent the last two years as a senior political adviser to King Abdullah. He is a veteran diplomat who served at the Foreign Ministry for years. In his letter of designation Oct. 7, the king asked Khasawneh to focus on a number of key issues including dealing with the COVID-19 health crisis, economic recovery, food security, unemployment, education, and conducting free and transparent elections slated for Nov. 10.

But there was criticism on social media for the fact that Khasawneh had formed a fairly large Cabinet of 32 ministers, including three deputies, five ministers of state and three women. It also included 13 new ministers while maintaining eight from the Razzaz government. The Cabinet included liberals and conservatives alike, raising questions about the ability of members of the Cabinet to work together.

Razzaz, who took over in June of 2018 following mass protests against his predecessor, Hani al-Mulki, forcing him to resign, had raised hopes among Jordanians when he spoke of a new renaissance and forging a new social contract. He was unable to make any political reforms while his economic plans had failed to trigger economic growth. He was accused of nepotism, appointing friends while lacking leadership.

But the biggest test for Razzaz came in March when the government imposed a full lockdown to confront the COVID-19 pandemic. Painful as they were, the measures were praised for containing the number of daily infections, which for many days had reached zero. But no sooner than the country started opening up various sectors, the kingdom witnessed a sudden spike in infections and mortality rates. By mid-August, the kingdom began seeing a steady rise in infections, and by the first week of October, the numbers exceeded 1,000 daily cases with dozens of daily deaths.

Khasawneh takes over at a crucial stage for the country. The government has extended a two-day, weekly curfew across the kingdom in a bid to contain the spread of the virus while limiting the damage to the economy. Under Razzaz, the unemployment rate had jumped to 23%, from 19%, while total general debt had risen to $45 billion, an increase of $5.6 billion in the last two years.

As to the parliamentary elections and in spite of general voter apathy, especially among the youth, there is still the possibility that the elections could be postponed if the spread of the coronavirus is not contained.

Commenting on the makeup of the Khasawneh Cabinet, political commentator Fahd al-Khitan wrote in Al-Ghad daily Oct. 12 that this is mainly a conservative bureaucratic government that is likely to be extremely cautious when addressing political reforms. “This government does not have the luxury of time and must act fast to confront pending challenges. It must streamline the way it takes its decisions,” Khitan said.

“But it must be said that under these tough circumstances, no government will enjoy popularity and it should not seek it. Instead, it should work to improve the lives of Jordanians as much as possible,” he added.

Strategic researcher and head of the Middle East Center for Media and Political Studies in Amman Amer al-Sabayleh said the makeup of the Cabinet does not reflect its focus on the four main issues that were referred to in the designation letter: health, economy, food security and agriculture.

Sabayleh told Al-Monitor he hasn’t seen a genuine program for this government to confront such issues or deliver a new reality. He said “the extraordinary circumstances that we face required a slender Cabinet, but instead, we have 31 ministers [32 including the PM] lacking in seasoned bureaucrats.” He added that even in the midst of crises, the formation of the Cabinet relied on traditional methods of geographic allocations in order to satisfy everyone.

“The only positive thing I see is that Khasawneh spent the last two years at the Royal Court close to the king so he has the advantage of knowing what needs to be done and where other government had gone wrong, but again time is not on his side,” Sabayleh concluded.

Columnist at Add-Dustour daily Hussein al-Rawashdeh wrote Oct. 12 that the new prime minister will face a number of local challenges other than those related to health and the economy. “One is the Teachers Association file, which is now before the courts, and I think the government will not back down. … The file will be closed politically,” he wrote.

“The other has to do with the fate of the Muslim Brotherhood group, which the courts ruled is illegal, and that file too will be closed by the government,” he added. Rawashdeh also pointed to a number of steps that Jordan would take regionally in relation to the US Middle East peace plan, known locally as the deal of the century, and toward recalibrating its ties with its Arab neighbors in the wake of the latest developments.

But one critic of the way Jordanian governments are traditionally formed, who requested anonymity, told Al-Monitor Jordanians want to see a real change in approach and methods. “In the past 20 years, we have seen 12 prime ministers and 18 governments all formed in the same way, but Jordanians are tired of this formula. It’s like we complain that the soup is salty and all the chef does is to change the spoons!” he concluded.