Not one student in 349 Jordanian schools passed critical exam

The high failure rates of the General Secondary Educational Certification Exam, or Tawjihi, raised a debate in Jordan about the efficiency of the Education Ministry, the unqualified teachers and the high number of Syrian children attending Jordanian schools. 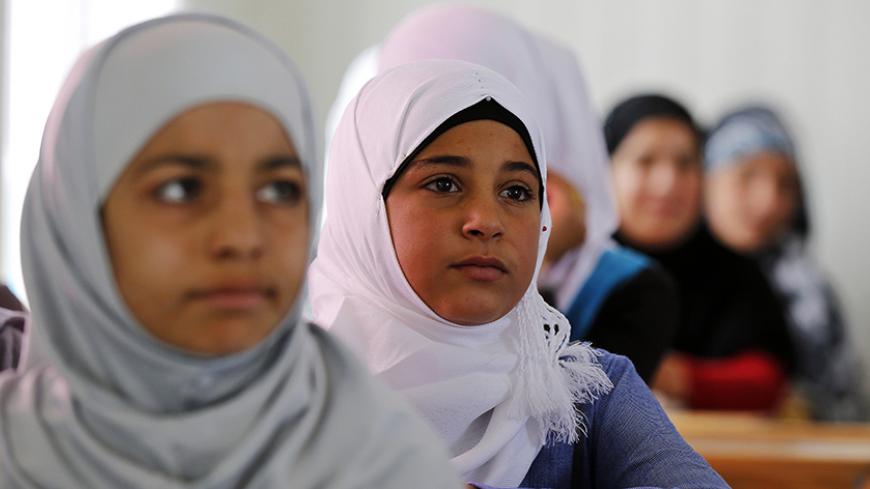 Syrian refugee children attend class in a UNICEF school at the Zaatari refugee camp in the Jordanian city of Mafraq, near the border with Syria, March 11, 2015. - REUTERS/Muhammad Hamed

AMMAN, Jordan — Controversy has erupted in Jordan after the Ministry of Education announced on Aug. 1 the poor results from this summer’s General Secondary Educational Certification Exam, or Tawjihi.

Speaking at the 2015 Educational Development Conference, Prime Minister Abdulah Ensour admitted Aug. 1 in Amman that Jordanians have “ignored quality education for decades now and focused on the issue of quantity.”

Musa Shtewi, director of the Center for Strategic Studies at the University of Jordan, told Al-Monitor, “This is a very strong indication of the failure of the educational system and has to be treated urgently. Obviously, not much has been done to deal with this issue at all.”

Passing the Tawjihi exam is vital in order to enroll in state universities. It is one of the most important tests for Jordanian students throughout their education.

Many have blamed the quality of teachers for the failing schools. Parliament member Jamil Nimri told Al-Monitor, “The lower-qualified people get to become teachers. Thousands of new employees every year go to this field while in other ministries they take few people.” According to Nimri, the low salaries, especially for a family, force teachers to work a second job, pushing away the most qualified candidates.

Minister of Education Mohammad Thneibat explained Aug. 5 that maintaining dozens of schools with fewer than 10 students in rural areas is problematic. Nour Abu-Ragheb, partner at Edvise ME, a Jordanian educational consulting group, called for the merging of these small, rural schools. In an interview with Al-Monitor, she said, “The smaller schools usually have very low resources and not well-trained teachers. It has been a trend that these schools have not been performing as well as larger schools.” However, when the Ministry of Education previously attempted to close down these tiny schools, they faced a backlash from rural communities and members of parliament who insisted on housing a school in their village, irrespective of the number of students.

Besides the financial inefficiencies of preserving a school with less than 10 students, such institutions harm students' education. UNICEF officer Susan Ayari, based in Amman, told Al-Monitor, “There has to be some critical mass in the classroom to create inquiring, energy, information being shared by participants, and that doesn’t happen in a class that is too small.”

Others attributed the high failure rate to the challenging questions on this summer’s Tawjihi. Abeer Akhras, a 12th-grade English teacher in Amman and Central Council member of the Jordanian Teachers Syndicate, told Al-Monitor, “This year, the examinations in general were very difficult for students. They did not match the abilities or knowledge of the students.”

In addition to the supposed difficulty, Abu-Ragheb insisted that the Tawjihi test itself is flawed. “The exam is ancient, and the principles are outdated with rote memorization. There is no analysis, critical thinking or problem solving.”

High turnover rate of the education minister position has also contributed to instability within the sector. Between 2009 and 2013, there were seven different ministers of education. Abu-Ragheb said, “It was crazy. With each one [minister of education], there is a new strategy, focus and priorities. If the country is serious about education, he needs to be there for a while to make a difference.”

Ayari acknowledged that the absorption of approximately 220,000 Syrian refugee children has impacted educational quality in Jordan. “The Syrian crisis has caused significant overcrowding in certain parts of the county. And in those schools that have been double shifted because of the Syrian crisis, one has to reduce the number of learning hours for all students, irrespective of nationalities.”

Yet Shtewi was skeptical that the Syrian war was the main reason for the country’s educational decline. “If you look at the distribution of the schools where nobody has succeeded, it is across the entire country and not only in the areas with a high presence of Syrian refugees. I wouldn’t blame it on the Syrians,” he said.

The role of the administrators within the Ministry of Education has been hotly debated. Given the disconnect between regulations in the capital and performance of schools in the periphery, Nimri said, “We need an administrative revolution to have better control and monitoring of our schools.” Nimri called for doubling or tripling the number of monitors to increase the frequency of school visits.

Echoing the frustrations many Jordanians share with the number of failing schools, political analyst Mohammad Abu Rumman wrote Aug. 3 in his Al-Ghad column, “There are fundamental defects that have occurred in the educational process, which led to a dangerous disease.”