Why some Israelis give low marks to education minister's math plan

Not all Israeli students and educators are impressed with Education Minister Naftali Bennett's plan to increase the number of students taking advanced mathematics exams. 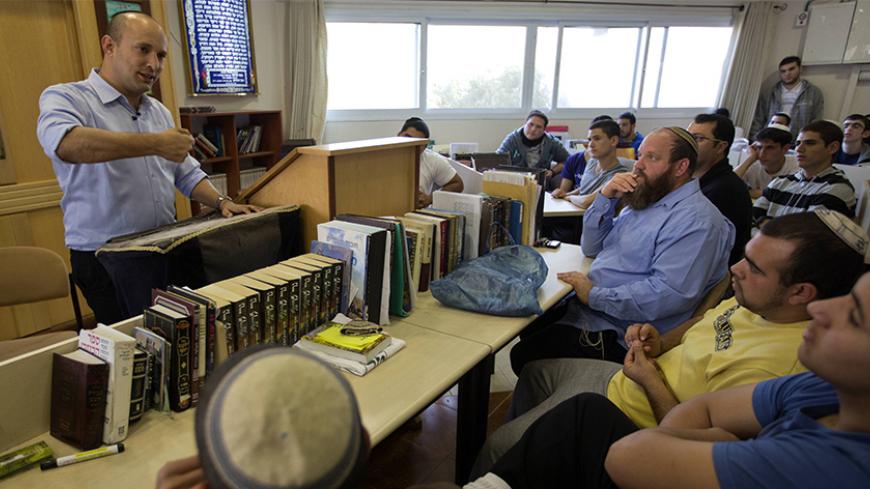 The camera focuses on a teacher with her back to her students. She writes a formula on the whiteboard and asks, “Who knows what sin α is?” One of the students responds by tossing a paper airplane at the teacher. At first she demands to see the student’s parents, but when the teacher picks up the paper airplane, however, she discovers that the insolent student — who happens to be former President Shimon Peres — wrote the correct answer on it. “You may amount to something after all,” says the teacher with a faint smile.

The ad is part of the Ministry of Education's "Give Five" campaign, intended to double the number of students completing five units in mathematics (the highest level) in their matriculation exams. As part of Education Minister Naftali Bennett’s “Startup Nation” strategy, the campaign has already angered teachers, parents and students alike, and it’s come under criticism from experts in the field. For example, Ron Aharoni, a professor of mathematics at the Technion in Haifa, told Al-Monitor that even students who pass five units of math in their matriculation exams “don’t have the greatest ability to think when they come to us.”

This isn't the first time that Israel has tried to improve the situation of high school math in general and increase the number of students completing five units in math in particular. For example, the number of students who take the matriculation examination at this level dropped from 13,000 in 2005 to about 10,500 in 2010. The situation has continued to deteriorate since then, and Israel has failed to impress in international rankings.

The campaign itself is estimated to have cost 1 million shekels ($260,000) of the 75 million shekels ($19.5 million) that the Ministry of Education budgeted for its overall program to bolster the study of mathematics in high school. However, many students felt that the program was dismissive of other, nonscience subjects.

"The whole campaign is insulting to us," Romi Segal, a 17-year-old high school student from Haifa told Yedioth Ahronoth May 24. She even started a Facebook page called "To give of myself" in protest. “The message that they are sending is ‘You aren’t good enough. You have a flaw.’ They are belittling me, my particular interests and my friends who are doing three or four units in mathematics, when they say on TV that the only way to succeed in life is to learn more math,” Segal said in the interview. The Facebook page that she created is intended "to shatter the disparaging stereotype created by the campaign." Segal protested, "No, there is no connection between succeeding in life and the number of units you take in math.”

Another Facebook page with the name "I don't want to be a mark machine" features a satirical image that critiques the pressure to study advanced mathematics for students who aren't suited to it. The caption reads, "Finish five units in your matriculation examinations — and a prescription for Cipralex.'' The drug is an antidepressant.

In contrast, Idan Pinsly, a 12th-grade student from the Hof HaCarmel school in Kibbutz Maagan Michael who just completed five units in mathematics in his matriculation exams, believes that knowing math provides him with many valuable tools. “Mathematics teaches more than just how to solve problems and use formulas,” he told Al-Monitor. “It also teaches you how to deal with complex situations. You can find math being used in other subjects such as history, literature and art. It is an educational tool that teaches you not to give up, to develop yourself and to learn how to do things that you never imagined you could do.”

Nevertheless, it still seems as though Pinsly is a lone voice supporting the Ministry of Education's campaign. Segal's Facebook page has led many students, their parents and even teachers to write critically of the program the Ministry of Education describes as "a national strategic objective." The ministry claims, "Any harm to the study of mathematics is harm to the strength and security of the State of Israel.”

Orna Mor, for example, who introduced herself as a math teacher at a high school in the center of the country for the past 25 years, wrote on the Facebook page, "The spirit behind what the minister is doing is disparaging to Israeli students. It is too bad that someone with the gall to say that he is an educator rejects 80% of our youth offhand.'' Then there is Yael Roiter Elbaz, who wrote, “I only did three units. … Yet that did not prevent me from succeeding in life and finding a job with a top company.”

Aharoni, a veteran educator, believes that the drastic decline in the number of students being tested in five units of math is a consequence of decisions made by the schools. "Several years ago, it was decided [by the Education Ministry] to raise the level of the matriculation exams. Students started dropping like flies,” he explained, “so the schools encouraged their students to do just four units. That way, their success rates would be higher.''

Aharoni added, “Not everyone can or should be tested on five units of mathematics, but many more students would be doing that if they weren't taught to hate the subject as early as elementary school. Not enough is invested in elementary school education, and that’s where we lose the students. Later they try to force them back into it. No campaign will help here, but it is typical of the Ministry of Education to avoid dealing with the root of the problem. They should teach math differently, so that students understand the significance of the steps and not just how to do them.”

Aharoni also claims that boasting about the number of students completing their matriculation exams with five units of math is hollow, since even passing those tests is inadequate for university level studies. “Everyone in the various universities agrees that even those people who pass the matriculation exams are coming to them less and less prepared. For years there was no proper high school curriculum. There were no textbooks either, just exercise books. This means that even those students taking five units of high school math may be technically proficient and may know how to do certain things, but they have no idea why they are doing them. When they get to university, we waste our time teaching them basic high school math. A four-year degree program takes 5½ years because first we have to bring the students up to par. The first semester is traumatic for everyone.”

Given the damning comments by teachers and students alike, it seems as though Bennett's target of increasing the number of students being tested on five units of mathematics is not the right goal. It may be better to improve students’ knowledge of mathematics, regardless of their level of testing during the matriculation examinations.