The low scores of Israeli-Arab high school students compared with Israeli-Jewish students should serve as a warning sign for the authorities, the education system and also the parents. 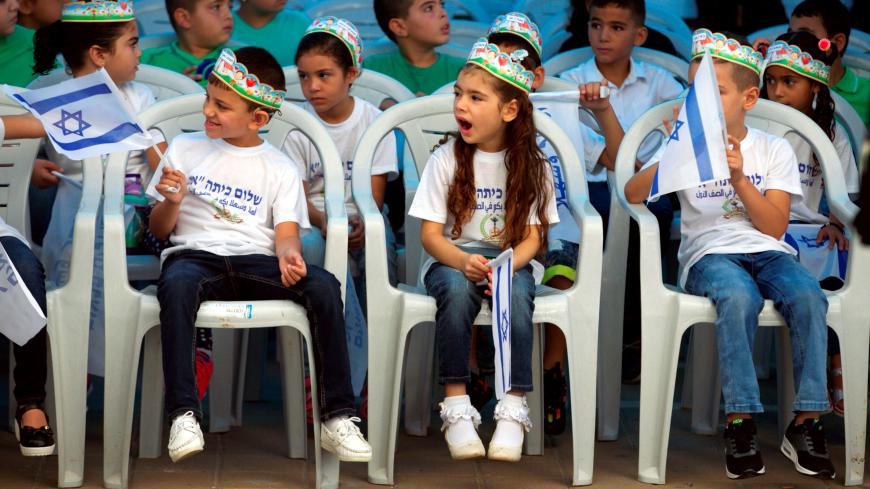 Pupils at the Tamra HaEmek elementary school wait for the visit of Israeli Prime Minister Benjamin Netanyahu and Education Minister Naftali Bennett, on the first day of the school year in the Arab-Israeli town of Tamra, Israel, Sept. 1, 2016. - REUTERS/Baz Ratner

Israeli school children are weak in reading, mathematics and science skills, according to test results issued Dec. 3 by the Organization for Economic Cooperation and Development (OECD). The failure of Israeli students as reflected in the results of the Program for International Student Assessment (PISA), which tests the reading, math and science skills of 15- and 16-year-old students, was twofold. Not only were their results below the average achieved by the students from 79 countries who took part in the 2018 testing, but the gap between the Jewish and Arab children’s achievements was huge given the poor performance of the Arab students, which declined compared to the 2015 results.

“Israel has the largest gap between its highest-performing schools and lowest-performing ones,” professor Andreas Schleicher, the OECD’s coordinator of PISA, explained to Israel’s Channel 13 News. “Social background is a powerful determinant of success in schools and I think those are challenges the [Israeli] system will need to address better in the future.”

Where does Israel’s education system go wrong? How was such a major gap formed between the achievements of Jewish and Arab students — 144 points in reading, 111 points in mathematics and 116 points in science? These data are even more serious given that the state’s education budget has almost doubled over the past decade, from 32 billion Israeli shekels ($9.2 billion) in 2009 to 62 billion shekels ($17.8 billion) in 2019.

“On the one hand, quite a few Arab schools — especially in the [predominantly Bedouin] southern region — lack computer and internet infrastructure, and on the other hand, authorities only wake up ahead of the PISA tests and start offering seminars and guidance for teachers. In my opinion, this is one of the most critical mistakes on the national level and not just in Arab schools,” math teacher Suheil Sharif, a former Ministry of Education official, told Al-Monitor. “True, the ministry has invested quite a bit of money [in the Arab education system], but it is worth examining whether the funds were invested in the right places.” According to a 2018 study by the Israel Democracy Institute, informal education programs in the Arab society received in 2015 a huge budget of 650 million shekels ($187 million) over a period of five years, but it seems that the Ministry of Education did not really know what to do with that money.

The test scores, designed to assess student readiness for the job market, are a red flag for the Israeli economy given the poor overall performance of Israeli students, who scored below the OECD average, and the Jewish-Arab gap. They clearly indicate that the state should undertake improvement of the overall scores and those of the 22% Arab high school students as a national priority. Today’s 10th graders are tomorrow’s college students and nurturing the Arab school children would increase their numbers at university, including in exact sciences, preparing them for integration into the country’s high-tech economy or into other well-paying jobs. Consequently, lower spending on education will result in fewer Arab students turning to higher education and in extreme cases, deteriorating into crime and violence, as addressed in this Al-Monitor article.

“The results of the PISA test are a threat to Arab society in particular and Israeli society in general, and to the Israeli economy as a whole. With such results, it will be really hard to integrate into the job market in the future,” said Ayman Saif, former head of the Authority for the Economic Development of the Minority Sectors in the prime minister’s office. Speaking to Al-Monitor, Saif pointed to three reasons for the Jewish-Arab gap: “Budgeting gaps so that each Arab student is allocated less funding than each Jewish one; teaching methods based on learning by rote rather than creative thinking; lower quality of teachers compared to the past. These three [reasons] together lead to the horrible result we got. The state spends 41,000 shekels [$11,800] a year on each student in the Jewish national-religious public system, it spends 36,000 shekels [$10,350] on each student in the regular public system, but only 24,000 shekels [$6,900] on a student in the public Arab education system. There is a gap that was not addressed in the five-year plan for the Arab society, and now the Ministry of Education is about to launch a new reform plan to equalize high school budgeting."

In December 2015, the government approved a 9.5 billion shekel ($2.7 billion) five-year plan for the country’s Arab community. This focused on improved economic and social integration, including housing, but not necessarily on formal education. While some of the money was invested in informal education, such as after-school activities, it did not have a direct impact on the PISA scores. In other words, the plan did not target the education problems in Arab communities and shrinking the scholastic achievement gaps between Arab and Jewish students.

“The investments by the government that we championed over the last decade were very high; we are talking about billions," Saif noted. “But most of it went to employment and infrastructure. Investment in education was mostly channeled to informal education programs, which did not exist before in Arab communities. These investments generated good results in employment, and also increased the number of students who successfully past the matrix exams, but you cannot expect this kind of investments to affect the PISA results.’’

Does Arab society bear any responsibility for its predicament? Does Arab society let itself off the hook when it points the finger of blame at the state — for example, the Ministry of Education — and does not examine its own role in the shortcomings? After all, these gaps were not born overnight. “These days, there is trouble with the parents; they do not follow up at home on their children’s achievements and expect the teachers to be responsible for everything,” said Salwa Riyan, a junior high school science teacher in the Arab town of Kfar Bara. “I am not trying to let the teachers off the hook,” she told Al-Monitor. “True, the teachers’ quality has declined, but the parents have yet to internalize that they are partners in the education mission just as much as the teachers at school. It is not enough to sign up the children for a science or mathematics course and hope that will compensate them for the knowledge they lack.”

To achieve the desired change and improve Arab student skills, the Ministry of Education must regard Arab society as an integral part of the State of Israel. The state will emerge the biggest winner if the situation of its Arab citizens and students is improved.