The TIMSS math results for 2015 show Israel dropping nine places, but does this necessarily mean that Israeli students are doing poorly in math? 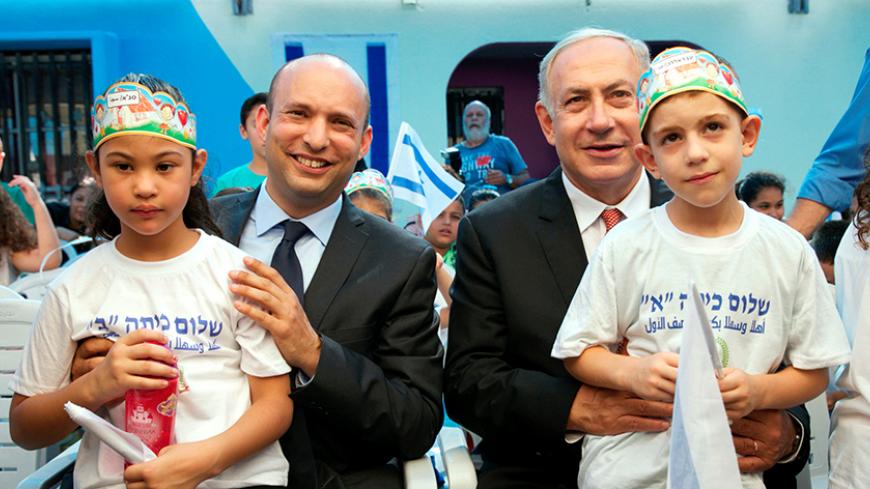 Israeli Prime Minister Benjamin Netanyahu (R) and Education Minister Naftali Bennett sit with pupils during a visit at the Tamra HaEmek elementary school on the first day of the school year, in the Arab Israeli town of Tamra, Sep. 1, 2016. - REUTERS/Baz Ratner

When the results of the 2015 international Trends in International Math and Science Study (TIMSS) tests were released Nov. 29, Israeli students showed a marked decline in math and the sciences. Nevertheless, Education Minister Naftali Bennett was ready with a pat and efficient response, at least as far as he was concerned. “Remember how everybody attacked me over my obsession with mathematics? Now you see why. When it comes to the study of math, we are facing a state of emergency,” Bennett wrote on his Facebook page soon after the results were released to the media.

The new data shows that compared with the previous test in 2011, Israel dropped nine places in the worldwide math ranking of students, from seventh to 16th place. Similarly, it dropped six places in the sciences, from 13th to 19th. TIMSS is an international test, held every four years, to assess the level of knowledge and competency of eighth-grade students in math and science. Israel has been participating in these tests since 1999.

Soon after Bennett entered the Ministry of Education, he launched an expensive campaign to encourage the study of math. The project came under fire from every side. At 75 million shekels ($19.5 million), not only was it too costly for many, it was also considered much too aggressive. That explains why the current minister of education was quick to take advantage of the release of the results to boast about how he identified the problem and took steps to correct it. In his Facebook post and his response to the press, Bennett made a point of emphasizing that the test took place in March 2015, two months before he assumed his current position. Declaring the decline in Israel’s international ranking as a “state of emergency” will help him in future budget debates.

While Bennett, the chairman of HaBayit HaYehudi, was cheerful, the Twitter account of former Education Minister Gideon Saar (Likud) also reflected a certain level of personal satisfaction. “Israel’s dramatic improvement in the TIMSS test rankings when I was minister of education resulted — first and foremost — from the setting of clear goals for improvement on the international tests. That is the way to succeed.” Saar served as minister of education from 2009 to 2013. The results of the TIMSS tests released in 2012 showed a significant improvement in the ranking of Israeli students.

The missing link in the education ministers’ chain, who was not heard from, is former Minister of Education Shai Piron of Yesh Atid, who served for about a year and a half between Saar and Bennett. The tests, whose results were only released now, were administered about a year after Piron entered office. So is it even possible that in the short period he served as minister, Prion succeeded in wiping out all of Saar’s achievements? Obviously, the very idea makes no sense. It is not the kind of conclusion that can be taken seriously by any criteria. Besides, Saar served for a relatively long period of four years. Any changes he implemented should have endured for much longer.

At a celebratory press conference in December 2012, Prime Minister Benjamin Netanyahu and Saar boasted of the achievements shown by the 2011 TIMSS study. “Israeli students made the greatest leap forward since Israel first participated in the international tests,” Saar said. After that same press conference, it was discovered that the report contained a comment that diminished the actual achievement, but which was never mentioned at the press conference. It stated that an analysis of the data and trends from Israel, comparing the results to previous tests, is impossible because of changes to the translation of the test into the local language. Nevertheless, neither Saar nor Netanyahu intended to ruin their personal and national celebration. While making their declarations, both of them knew that most people just read the headlines and skip the small print.

It is only natural that handing education over to politicians would be tainted by populism and self-promotion. Saar, Bennett, Piron and all the other ministers wanted to leave their mark on the education system and highlight achievements made under their watch. But are the TIMSS tests, with their problematic ranking system, the best way to determine success or failure? The results of the test are determined in relationship to the achievements of other countries. If students in those other countries improved their performance, the result would be a lower ranking for Israel, even if there was no change in the students’ actual level of achievement.

“I’m waiting for the day when everybody realizes that all these tests are bullshit,” said former Knesset member Einat Wilf to Al-Monitor in response to the release of the 2015 test results. Wilf, who wrote the book “Back to Alef-Bet: The Way to Save Education in Israel,” also served as head of the Knesset’s Education Committee. During that time, she waged a relentless struggle to eliminate external testing altogether. She claims that these tests do little more than drive the entire system — including school administrators, teachers and students — crazy. What the tests fail to indicate is the students’ actual level of knowledge. Nor do they show any indicators of success.

Wilf points to Saar’s term as education minister as a turning point, when Israel began to attach too much importance (in her view) to these external tests. “They’ve remained in place ever since. They don’t provide us with evidence of anything, and they don’t depend on anything either. The tests are just a trend that was popular in the United States in the 1980s. What we did was import it here wholesale and say that it is the most advanced thing there is. I find it sad that we continue to give it a place of honor in Israel and treat it like gospel truth, when they have already gotten over it in the United States.”

Only time will tell whether Bennett and his campaign to improve mathematics education will improve Israeli students’ performance on the next TIMSS tests, scheduled for 2019. If there is one important lesson to be learned from these tests, it is that the gap in achievement between rich and poor students has grown considerably. As far as this gap is concerned, Israel is in third place, after Turkey and Qatar. Furthermore, the scores of Jewish students who speak Hebrew are significantly higher than those of Israeli Arabs. This difference cannot be blamed entirely on Bennett, Piron or Saar, either. It is the consequence of one of the longest, most serious failings of the Israeli education system, and it has been for generations. But to figure this out and fix it doesn’t take a series of international tests.