Education Minister Naftali Bennett's decision to choose math studies as his prime reform plan could help him restore his original political image of being the startup entrepreneur who focuses on Israel's high-tech future. 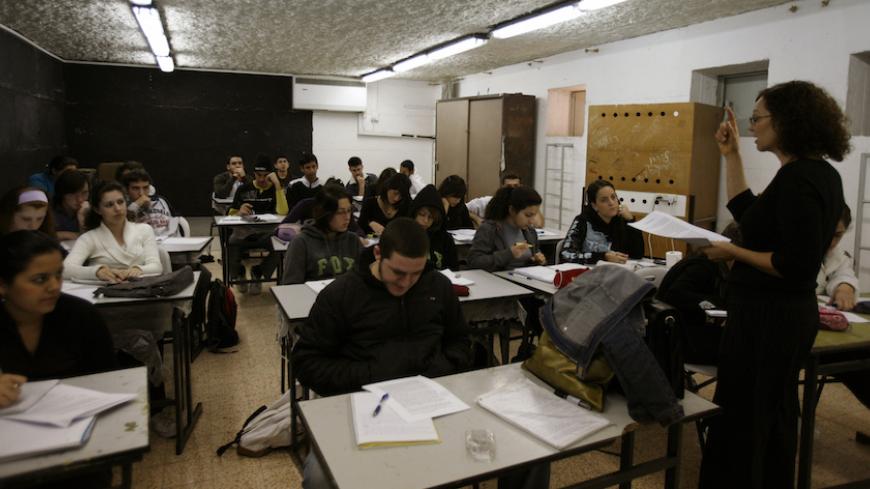 New Education Minister Naftali Bennett’s decision to place his “Revolution in Math Education” high on the list of his ministry’s priorities signals more than just a professional agenda. It is also an indicator of his political ambitions.

As someone focused on targets and measurable objectives, Bennett decided to draw the public’s attention to two major educational reforms right before the start of the school year Sept. 1, using a well-covered news conference as his platform. The first is his “Sardine Reform” (referring to protests by parents against crowded classes where children were squeezed ''like sardines in a can''), reducing class size for first-graders from 40 students to 34. He did this in response to nationwide protests by parents about overcrowding in schools. The second was his revolution in the way math is taught. It has won extensive media support since it was announced Aug. 30.

Almost immediately upon entering the ministry, Bennett — the chairman of HaBayit HaYehudi — identified one of the most pressing problems facing Israel’s education system over the past few years. Israeli students have done poorly on the Program for International Student Assessment tests of the Organization for Economic Cooperation and Development. In 2013, for instance, Israel ranked 40th among 65 countries for student achievements in mathematics and 41st for achievements in the sciences. The State Comptroller’s Report of May 2014 revealed a very worrying picture concerning these subjects. It found that there has been a steady decline in the number of students studying math at the level of four and five points (five is the highest level) for their matriculation examinations. According to the report, this decline is dramatic. In 2006, 12,900 students took advanced mathematics, while in 2013 the number stood at just 9,100. A program to stop this trend, launched in 2009 at a cost of almost 900 million shekels (about $230 million), failed to achieve its objective.

One reason that Bennett picked this issue is because he comes from the high-tech field, where many of the employees specialized in mathematics in high school. Like so many others, he claimed that the dramatic decline in the number of students concentrating on mathematics is a strategic social problem that could eventually have severe implications for Israel’s job market.

Politically, his choice of mathematics from a more comprehensive set of problems facing the educational system corresponds with the image shift that the chairman of HaBayit HaYehudi is trying to spur. Bennett came away from the March 17 elections having failed to achieve his goals. The eight seats that he won were a severe disappointment, especially considering that pre-election polls indicated he could win 17 seats. Indeed, Bennett considered himself a serious candidate for defense minister.

Furthermore, expectations from Bennett were high because in the 2013 elections he succeeded in winning the support of many young secular voters who identified with him (even though HaBayit HaYehudi is a religious party). Carried aloft by waves of repercussions from the social protests, he led his party to 12 seats. Since then, however, he has managed to stand out in the government as a right-wing ideologue and lobbyist for the settlers, which caused him a significant loss of votes. Bennett had distanced himself from his image as a candidate for all Israelis, which benefited him so well at the start of his political career.

Now, after this year’s defeat, he realized that if he is to fulfill his dream and take the prime minister’s office from Benjamin Netanyahu, he will have to go back to that common denominator that he shares with the broader public. He will have to be the candidate for all Israelis, transcending sectoral politics.

Obviously, Bennett is not giving up his political base on the hard-core right. As minister of education, he plans to take care of them in terms of both budget and content. He still advocates on behalf of the settlers in the government and the Cabinet. On the other hand, his gamble at launching a mathematics revolution as minister of education could help foster an image of himself as a national and stately leader.

The chairman of HaBayit HaYehudi launched his new program in a festive press conference Aug. 30. Standing beside him was the perfect partner and presenter for this bold task, former President Shimon Peres, an internationally acclaimed icon of innovation. It would be no exaggeration to say that for Peres, ideologically speaking, Bennett is a lot like a bullfighter’s red. It is precisely because of this that the education minister can claim a public relations coup by recruiting Peres for a series of amusing videos promoting the new program.

Bennett assembled this program — with the hip name “Give Me Five” — over the past few months in conjunction with professional educators. It seems to be a positive program without trying to be too sophisticated. It sets targets, which include doubling the number of students taking higher mathematics to 18,000 within four years. Furthermore, 100 new programs to teach mathematics at a five-point level will be opened, and higher math programs will be available to groups as small as six students.

The Ministry of Education will budget for more teaching hours in order to help students overcome difficulties and will take steps to improve the quality of teachers. Some new teachers will be recruited from high-tech. The curriculum will be updated as well, after a 20-year unchangeable program.

“The threat faced by mathematics education is a strategic threat, and it is happening in the 'Startup Nation' of all places. We need a national program,” Bennett said at the press conference. He is correct. The ongoing crisis in mathematics and science education could soon become an obstacle to the economy as far as technological development and the high-tech job market are concerned. It is a good start, but the minister will have to prove to be even more farsighted now and further on down the road. He will also have to prioritize less measurable skills pertaining to a broader general education, including subjects like sociology, culture, the arts, democracy and liberal values. After all, these are no less important to the future of the State of Israel.

So far, it looks like the program is a wise political move by Bennett, aimed at helping him expand beyond his sectoral niche. On the other hand, this is no simple task. It is not at all certain that it is even possible, given the fact that he heads a right-wing religious party with its ideological and power bases stuck in the settlements. The electorate upon which he depends will always trap Bennett. He will need to appease it, signal to it and grease its wheels with special budgets. It will take a lot of hard work to find the right balance between the interests of the settlers and those of the public at large. The revolution in mathematics education is the first step, but will Bennett manage to persevere? That will be his first matriculation exam as minister of education.