Despite a grand five-year plan to invest in education for Arab-Israelis, the gaps between the Jewish and Arab education systems in Israel have only grown. 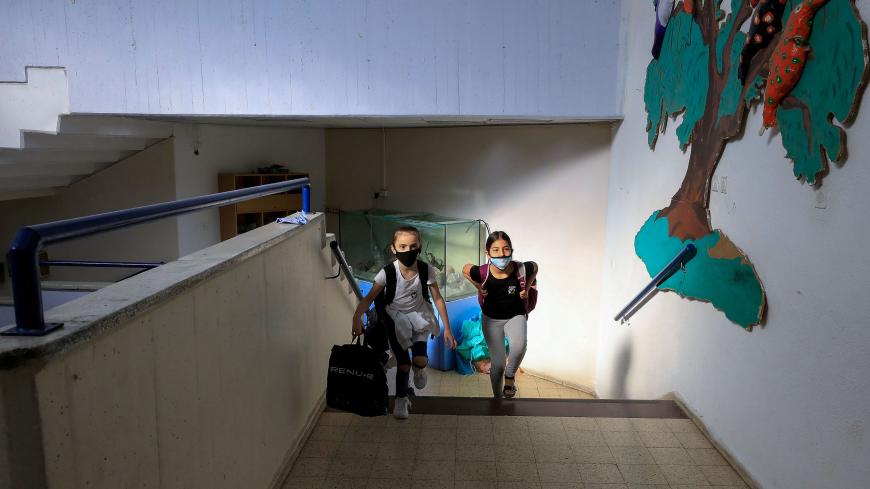 Israeli pupils wearing protective gear make their way to their classroom upon return to school after the COVID-19 lockdown, at Hashalom elementary in Mevaseret Zion, in the suburbs of Jerusalem, on May 3, 2020. - EMMANUEL DUNAND/AFP via Getty Images

The Israeli government was supposed to budget five billion shekels ($1.46 billion) to bolster the Arab education system from 2016 to 2020. This budget, part of a five-year plan meant to close gaps between Israel's Arab and Jewish populations, was set to end this year. Prime Minister Benjamin Netanyahu took pride in the plan, which allocated more than any government had before it the purpose.

But in a meeting convened by new Minister for Social Equality Meirav Cohen on July 14, it became clear that out of 15 billion shekels ($3.85 billion) the plan budgeted for several areas, scarcely more than half was actually delivered. The Education Ministry and the Finance Ministry were supposed to receive a third of the fund to add teachers, classrooms and instructional hours to Arab elementary and middle schools in order to close the gaps in educational performance and to better prepare students for high school. But little of the intended budget was actually granted, and from the data we have received, only 30% of the goal, about a billion and half shekels ($440 million), found its way to the intended recipient departments in the Arab education system.

The Ministry of Education admits that it failed to manage the plan properly and did not channel the money into the right programs. In the meantime, the gaps between Jewish and Arab students in Israel have grown. Data presented to the Knesset education committee showed that the achievement of Arab students declined from 2015 to 2018, as shown in the results of the Program for International Student Assessment exams that are administered to middle school students every three years by the Organization for Economic Cooperation and Development (OECD) for research, policy-making and curricula creation.

Compared to other OECD nations, Arab students in Israel are at the bottom of the chart, while Jewish students place a little higher than average. Tellingly, the average government investment was 24,000 shekels ($7,000) per Arab student and 43,000 shekels ($12,500) per student in the Jewish educational system. These figures include fees paid by parents, which are higher in the Jewish sector but cannot account for the full discrepancy.

In the July 14 discussion, Knesset member Yousef Jabareen of the Joint List said, “This is very worrisome data that should shake up the system and shows that the system must put together a pedagogical and budgetary plan as soon as possible to deal with the large gaps that were revealed by the PISA exams. Most troubling, though the exam tests reading proficiency in one’s native language, the results of Arab students were the lowest since the PISA exams began. According to the experts, a gap of 30 points is more or less equivalent to a year of schooling. In math and science, we’re talking about a gap of three to four years between Jews and Arabs. In proficiency and native language reading proficiency, the gap is five years.”

Sharaf Hassan, chair of the education committee within the High Follow-Up Committee of the Arab Citizens of Israel, called for the creation of a committee including representatives of the Arab public to examine the results and form a strategy to advance education for Arab students. He added that during the coronavirus pandemic, the technological gap between the Arab and Jewish sectors must be closed such that Arab students are as supported in virtual learning as their Jewish peers.

At the end of the discussion, the committee demanded that the Ministry of Education address the growing gap between Jewish and Arab education in Israel, including ending the budget disparities.

The previous education minister, Rafi Peretz, established a committee of experts to address the issues in the Arab education system, but the committee has yet to submit a recommendation. Al-Monitor has learned from political sources that it has discussed creating an administration for Arab education in Israel empowered to effect real change. One of the most important areas for improvement is access to advanced technological education that would enable Arab students to enter the tech sector. But the poor infrastructure serving the Arab public in general, and the Bedouin in the Negev in particular, poses an obstacle. This infrastructure failed to adequately support virtual learning during the pandemic, and a large portion of Arab students lost half a year of school.

New Communications Minister Yoaz Hendel promised to deal with the problem, but real change will more likely to come from the plan of Minister for Social Equality Meirav Cohen, who asked the Finance Ministry to extend the five-year plan until the end of 2021 and use that time to deliver the full funding intended for the sector.