Israeli officials estimate that the Saudi-Qatar rift could strengthen the Israeli-Saudi alliance against regional Islamic terror. 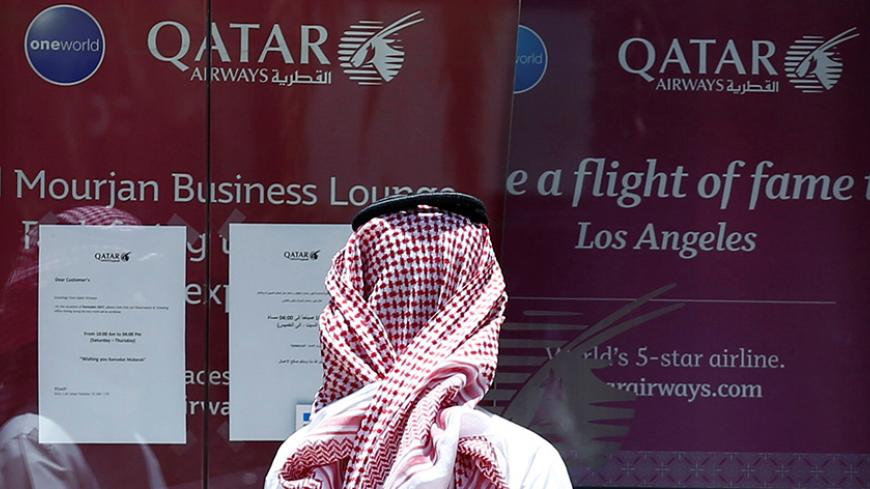 While Israeli security figures look for the trigger of the Sunni axis' surprise charge against Qatar, they ignore the recent reports of how Russian hackers supposedly planted fake news items on a Qatari news agency's website. Instead, they focus on the border region where three states — Syria, Iraq and Jordan — meet.

"Take note," a senior Israeli security official told Al-Monitor on condition of anonymity. "Just this week, the United States attacked a convoy of Syrian forces in that sensitive region. It happened at the exact same time as events were unfolding in the Persian Gulf, when the Sunni states broke diplomatic relations with Qatar. This was the second American attack in that same region in the past two weeks. It is a much more dramatic move than it seems from the outside, yet it is passing beneath the radar. It represents a full-force change in US policy in the Middle East."

The source added that the Americans went "over the heads" of the Russians and made it clear that they have no intention of allowing the Shiite axis to dominate the vital border region between the three countries. It seems as though the United States intends to block the establishment of Shiite territorial continuity from the Gulf to the Mediterranean, even if it requires force. Jordan's stability, Israeli interests and most of all Saudi fears of Iran have become the foundations of US foreign policy.

Israeli intelligence has yet to fully decipher what took place behind the scenes. Who planned, who coordinated and who led this complex attack against Qatar that surprised the Middle East and the entire world? How did they carry it out? The current assessment is that the event at which US President Donald Trump appeared before the leaders of the Arab states in Riyadh on May 20 was the watershed. As a senior Israeli official with access to Security Cabinet discussions told Al-Monitor on condition of anonymity, "The sword dance that we witnessed there was no accident. Trump actually launched the formation of this large, pragmatic Sunni alliance, threw all his weight against Iran and made it clear to the Saudis and their allies that the Obama era is over. You can come out of your bunker. You can stick your head out. Now it's time to restore order in your own backyard."

After President Barack Obama cooperated with Iran and made the Shiites of the Middle East seemingly less of an obstacle for the West, Trump is going in a new direction. A senior Israeli minister told Al-Monitor on condition of anonymity, "In effect, he adopted the Netanyahu approach, which considers Iran to be the head of the serpent and the source of regional terrorism."

Once the Saudis, Egypt, Jordan and other countries concluded that this was the case, according to the Israeli sources, they gained the necessary confidence and decided to act. "There is a long blood feud between Qatar and the other Sunni states," another senior Israeli security source told Al-Monitor on condition of anonymity. "We mustn't forget that the Egyptians consider Al Jazeera to be one of the direct sources of the revolution that overthrew [Egyptian President Hosni] Mubarak and brought the Muslim Brotherhood to power. The romance between Qatar and the Muslim Brotherhood was getting on everyone's nerves. It was starting to pose a real risk to the various regimes. They simply decided to put an end to it."

In Jerusalem, it is almost inconceivable to hear the Saudis demand publicly that the Qataris cease their cooperation and aid to Hamas. "It is as though the Israeli-Saudi alliance is suddenly breaking out of its dark confines and being showcased internationally," another Israeli minister told Al-Monitor on condition of anonymity. "But when the actual statement is analyzed, it quickly becomes obvious that this is not about Israeli interests. It is the continuation of that same old war between Sunnis and Shiites."

The common explanation in Israel is that Hamas is in the wrong camp, as far as Egypt and Saudi Arabia are concerned. The camp of the Muslim Brotherhood includes Turkey and many Sunni terrorist groups.

For the past few years, Qatar has been playing both sides. On the one hand, it sat down with its sister states in the Gulf, coordinated positions and maintained extensive relations with them, including intelligence cooperation. At the same time, it continued to fund the Muslim Brotherhood around the world, keep Hamas above water in Gaza, support incitement and foment passions throughout the Middle East through Al Jazeera and "dance at all the weddings." No more. The Saudis and Egyptians grew fed up with the situation and declared diplomatic war. According to intelligence sources in the Middle East, Qatar will be faced with a simple choice: Choose your partner, our enemies or us. This dancing at all the weddings is over.

This is a positive and encouraging development from an Israeli perspective. In a June 6 response to queries in the Knesset, Defense Minister Avigdor Liberman said, "The Arab states who broke off diplomatic relations with Qatar didn't do so because of Israel, nor did they do so because of the Palestinian issue. They did it because of their own concerns about radical Islamic terror. There can be no doubt that this opens many opportunities for cooperation in the war against terror. We saw the US president visit Saudi Arabia and speak, first and foremost, about a coalition against terrorism. The State of Israel is more than open to such cooperation. The ball is now in their court."

Israel is feeling hopeful. After he was ousted from Turkey, senior Hamas official Saleh al-Arouri found sanctuary in Qatar. Expelled from Israel seven years ago, he has planned and coordinated terrorist activities in the West Bank from exile. Arouri has now been reportedly kicked out of Qatar, too. This is a dream scenario, as far as Israel is concerned, of a Middle East in which terrorists who try to attack it will have a hard time finding sanctuary or another base from which to launch further attacks.

With the lines delineating the Middle East becoming sharper, the camps are taking shape and it's up to the key players to decide whose side they're on. Israel is one of the major beneficiaries of this new situation. Its intelligence, technological and military capacities should adequately reward its covert partners in the region. The regional alliance is alive and well, even if it is still kept in the shadows.