Is Turkey about to lose its only ally in the Gulf?

As Qatar's crisis with its Gulf neighbors de-escalates, Ankara is concerned about losing its valuable ally. 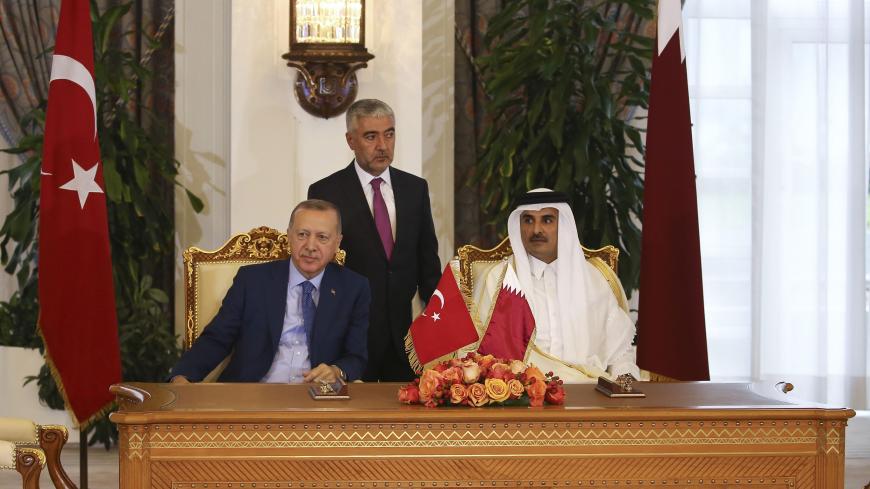 Ankara celebrated the meeting as a step toward the “institutionalization” of the Qatari-Turkish relationship. Pro-Justice and Development Party (AKP) pundits focused on the potential to form a new military axis on the basis of Turkish military bases in Qatar and the Turkish role as a stabilizer in the region. Yet the seven agreements signed during that meeting were mostly based on Qatari investments and procedural matters of standardization between the two countries. The Turkish press focused on the update of the swap deal between the two countries’ central banks, which raised the limit from $3 billion to $5 billion.

Yet, as Al-Monitor columnist Fehim Tastekin explains, the Turkish media have bloated the significance of the economic gains from the meeting. Turkey’s relationship with Qatar is showing signs of trouble. Indeed, sources in Ankara close to the palace have told Al-Monitor that one of the crucial issues at the Doha meeting was the potential for Qatari-Saudi rapprochement. Three days after Erdogan’s Doha trip, The Wall Street Journal reported that Qatari Foreign Minister Sheikh Mohammed Al Thani had visited Riyadh in October.

Foreign Minister Thani confirmed holding talks with “Saudi brothers.” This is seen as the first and most significant sign of an improvement in relations since June 2017.

First, in the Saudi-led coalition's original 13 sweeping conditions to lift the blockade on Qatar, one was the closure of the Turkish military base in Qatar. This condition was relaxed, as Qatar not only survived the sanctions but turned the tables on the countries that initiated the embargo. Indeed, a crucial reason behind Qatar's survival of the economic and political blockade was its economic and security arrangements with Turkey. The demands of Saudi Arabia, the United Arab Emirates and Egypt to close the Turkish base backfired. In the last two years, Turkey significantly bolstered its military presence in Qatar. Currently, 3,000 Turkish troops are stationed in Qatar. More importantly, the two countries plan to further expand their military cooperation.

However, Ankara fears that the thaw in Saudi-Qatar relations might negatively impact the Turkish military presence in Qatar. This fear can be observed in Erdogan’s statement in Doha. After reiterating how Qatari security, to him, is the same as Turkish security, Erdogan said, “Those who demand the closure of this base do not know that Qatar is our country’s friend of difficult days. We did not leave our friends alone, and we will not. We care about the peace and stability of the Gulf. We believe that this region [the Gulf] affects the peace and stability of the Middle East.”

A political scientist working for a pro-government think tank told Al-Monitor: “Although now Ankara talks about institutionalization, its relations with Qatar are based on erratic unilateralism. We know it will not be all undone overnight, but we also know the brakes on this fast-moving train can be quite harmful for Ankara’s regional prestige, to say the least.” Ankara understands that the alliance with Qatar needs to be strengthened. Multiple sources among senior bureaucrats in intelligence and security confirmed that the palace has high hopes for the Malaysian “Muslim-5” initiative, which will bring together Turkey, Qatar, Pakistan, Indonesia and Malaysia Dec. 18-21.

The second reason for Ankara’s concerns is Qatar and Turkish cooperation to support regional Muslim Brotherhood networks. With more Qatari officials openly speaking about the “end of the crisis” and the “illegal blockade,” Turkey is worried that Qatari support — mostly financial but also logistical — toward different Muslim Brotherhood groups will diminish. Qatari meddling in different countries — in Gaza, Egypt, Syria and Libya, through the Muslim Brotherhood and other militant jihadi organizations — was the main reason cited by the Gulf Cooperation Council (GCC) countries for the blockade.

Turkey has already seen the first signs of setbacks. During an Arab League vote to condemn Turkey’s Operation Peace Spring, Libya was the only country that opposed the measure. Qatar and Somalia, two countries with Turkish military bases, only expressed reservations. Ankara took note of that.

A professor of communications who spoke on the condition of anonymity said, “To make matters worse, Ankara was hoping for Qatari media, with its wide outreach in English and Arabic, to stand by Turkey. They rather had to deal with critical broadcasts from Al Jazeera.” Indeed, pro-government networks and Turkish officials openly criticized Al Jazeera for its broadcasts in support of terror.

We see further signs of concern in Ankara’s recent statements. A retired two-star general told Al-Monitor, “Today, Erdogan openly announced his willingness to send troops to Libya. This is also a message for Qatar. For a decade now, since the beginning of the Arab Spring in 2011 in particular, Turkey and Qatar have been supporting different armed factions in Libya. Here Erdogan is telling the Qataris: the penchant among Turkish Islamists seeing the Muslim world, particularly the Middle East, as their own backyard is far from over.” Over the years, both Turkey and Qatar have been scrutinized for supporting terrorist groups in Libya.

The last concern Ankara has about a potential thaw of Riyadh-Doha relations is further isolation in the region. Turkey’s foreign policy is adrift and running out of options, as well as oil-rich countries to ingratiate. For example, at the end of 2015, Saudi Arabia launched the Islamic Military Counter Terrorism Coalition. Ankara originally stated it would not join the initiative, but promptly changed its mind after Erdogan visited Riyadh. At the time, Erdogan claimed that Riyadh and Ankara have “the same political and military views.” Less than two years later, relations between the two had soured.

A similar scenario is possible with Qatar-Turkey relations since Qatar's dependence on Turkey will decrease when relations with the GCC normalize. Qatar is expected to abide by a unified GCC agenda at the bare minimum, and this will result in a more isolated Turkey.

In the last year, Erdogan has been soft-spoken about Iranian policies and proxies in the region. Still, Ankara is carefully watching the street protests in Lebanon, Iraq and Iran. As protests continue, Ankara fears having to face Saudi Crown Prince Mohammed bin Salman and Abu Dhabi Crown Prince Mohammed bin Zayed alone. The latter has become Erdogan's never-to-be-named archenemy.

A Turkish diplomat who served in the Gulf told Al-Monitor, “With the initial global uproar of the [Jamal] Khashoggi murder, Ankara reacted in a missionary zeal against Saudi Arabia, just like they did with the blockade against Doha. Erdogan took both issues as if it was a personal attack.”

A potential thaw between Qatar and the GCC has forced Ankara to acknowledge that Riyadh is a force to be reckoned with. Although the Qatar-Turkish alliance, on the surface, rests primarily on financial pillars, Qatar's investments in Turkey have not been as grand as promised. Yet Erdogan wanted to show the region and the Turks that he has an unconditional ally in the Gulf. To Ankara, Qatar’s value was more for its regional alliance with Turkey than its investments in Turkey. When Doha slides back into the GCC fold, Ankara knows it will have to make compromises to be on better terms with Saudi Arabia and Turkey's archenemy, the UAE.

by Murielle KASPRZAK and Joseph SCHMID | AFP | May 26, 2022
END_OF_DOCUMENT_TOKEN_TO_BE_REPLACED