Why Qatar and Turkey are becoming an item

Turkey and Qatar are working to extend their relations beyond the friendship of the countries' leaders to address their shared uncertainties about the new US administration, security threats and the growing regional influence of Iran and Russia. 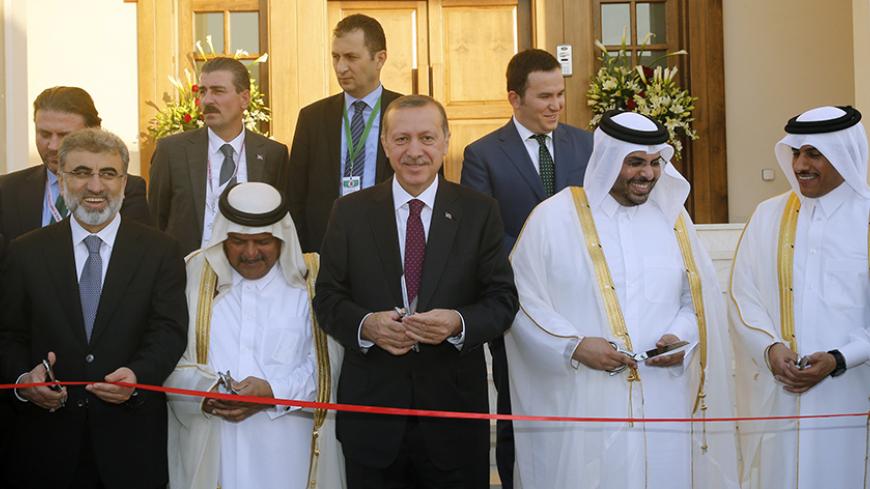 Turkey has been expanding its relations with Gulf Cooperation Council members, particularly Qatar. Turkey-Qatar relations have gained significant momentum during the past three months, led by the personal actions of President Recep Tayyip Erdogan and Qatari Emir Tamim bin Hamad Al Thani, who address each other as "brother." This interesting development calls for a closer look.

When Qatar's emir visited Turkey in December 2014, the countries set up a bilateral cooperation and consultation group called the Turkey-Qatar High Strategic Committee and forged agreements on military training, the defense industry and deploying Turkish Armed Forces in Qatari territory. As a result, about 150 Turkish army, navy and special forces personnel have been stationed temporarily at a Qatari military base since October 2015, waiting for construction to be completed on a permanent Turkish base. Turkey plans to augment its force there to 3,000 personnel once the base is ready.

Erdogan and Al Thani meet frequently. The latest meeting was Dec. 18, when the emir visited Trabzon on the Black Sea.

During that trip, the men signed significant agreements regarding energy, tourism, construction, defense and security. Turkey is expected to export to Qatar $2 billion worth of armored vehicles, radars and drones, as well as assorted military equipment for communications, night/thermal optics and other uses.

On Feb. 15, during Erdogan’s visit to Qatar as part of his GCC tour, he emphasized the importance of Turkey-Qatar relations and said: “Qatar has always been, especially in recent difficult times, a strong friend of Turkey. With Qatar, we look at all regional problems from the same window. Such close Turkey-Qatar cooperation is very important for the future of the region.”

There have been manifestations of this friendship in the field. When Turkey shot down a Russian Su-24 warplane in November 2015, Turkey’s relations with Russia — its main natural gas supplier — seriously soured. Qatar agreed to supply Turkey with liquefied natural gas.

In addition to basing its military personnel in Qatar to conduct training and joint exercises, Turkey also intends to sell Qatar defense industry products. Qatar appreciates Turkey’s approach for joint production, research and development, and easy technology transfer. Turkey is aware that Qatar, in addition to its traditional allies like the United States, is interested in diversifying its defense and security procurement.

Realistically speaking, what Qatar really needs is beyond what Turkey can offer. Qatar is particularly interested in systems and platforms that require high technology, as in Israel’s sophisticated Iron Dome air defense system, satellite and space technology, drones and frigates.

At first glance, one gets the impression Turkey's main motivation is money, and Qatar’s warming up to Turkey is because of the opportunity to diversify and obtain military technology. But it is a bit more complex than that.

Turkey and Qatar have opted for closer relations in defense and security because they face similar security dilemmas.

One of their common perceived threats is their joint regional opponent, Iran. Iran’s growing influence in Iraq, Syria, Lebanon and Yemen; its skill in mobilizing effective, armed militias; and its ballistic missile and nuclear programs have compelled the Turkey-Qatar cooperation.

Another consideration is Russia's growing presence in the Middle East, especially in GCC countries. While GCC countries expect economic benefits from Russia’s interest in their region, they are also concerned with its security threat implications. They are particularly concerned with Russian Foreign Minister Sergey Lavrov's recent reference to the "post-West" world order, which was seen as a reflection of Russia’s revisionist attitude.

Something else encouraging closer Turkey-Qatar relations is the ambiguity and uncertainty in the Middle East that began with US President Donald Trump’s election. His visa embargoes on six Islamic countries, his references to “radical Islamic terrorism” and his adviser Steve Bannon's opinions on Islam have motivated the GCC to move closer to Turkey. Some Qatari officials and academics fear that the visa embargo could well be expanded to GCC countries, although that's highly unlikely given the US economic interests in the region and its massive military presence in Qatar.

According to Nejar Tarakci, an expert at the Turkish Asian Center of Strategic Studies, Qatar is truly skilled and pragmatic when it comes to adapting to developments in the region.

“Turkish companies doing business in Qatar in construction, defense, finance and retailing have reached the level of $15 billion. After Iraq and Saudi Arabia, Qatar has become the third-favorite country for Turkish business,” he told Al-Monitor. “I believe this volume of economic relations automatically brings about military cooperation. Details are not yet finalized, but in two years Qatar will base 3,000 Turkish soldiers on its land. And, if it so wishes, Qatar will be allowed to open a military base in Turkey.”

According to a security source from Qatar Military Strategic Studies Center, who spoke to Al-Monitor on condition of anonymity, there is a security vacuum in the region because of the Arab Spring; the gradual withdrawal of Iraq, Syria and Egypt from the Middle East stage; the preoccupation of Saudi Arabia and European countries with their own issues; and declining US interest in the region's security. This is why Turkey has an opportunity to counteract Iranian and Russian influences. The Qatari expert, a retired colonel, said it is time to question the validity of “old habits of putting all our eggs in the same basket.” He added that it is time for Qatar to diversify its partners and risks.

In light of regional developments, Qatar has developed a two-pronged geopolitical strategy. First, by taking the sovereign asset funds it earns from energy revenues and investing them in international fields, it diversifies its national income. Second, the country is working to balance the potential security threat of Iran with the cooperation of regional and external players. This situation makes Turkey the best-qualified candidate to meet both Qatari needs.

Nevertheless, Qatar-Turkey cooperation, which is built on the personal friendship of Erdogan and Al Thani, so far is an elite, top-down process that still needs to develop a foundation reinforced by considerable input from the security bureaucracies of both countries, their think tanks and defense industries.