What are Turkish troops going to do in Qatar?

Per a security cooperation agreement between Turkey and Qatar, Turkey will set up a permanent military facility in Qatar. 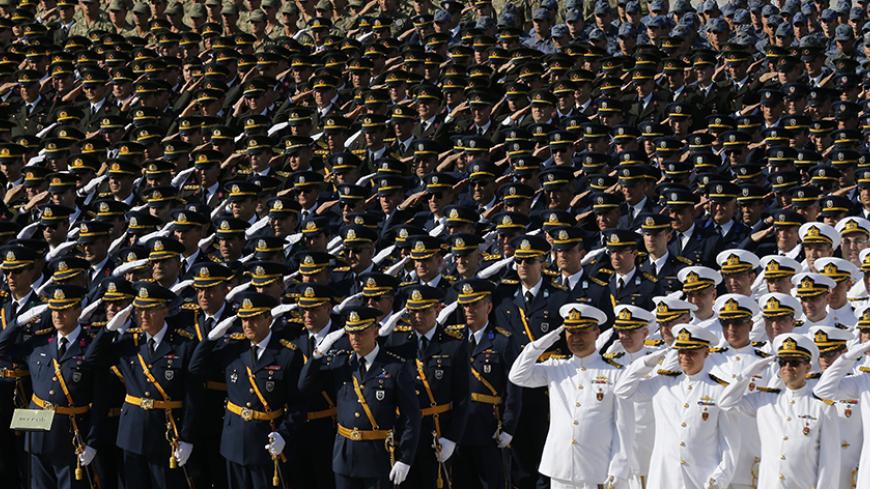 Turkish soldiers salute during a ceremony marking the 91st anniversary of Victory Day at the mausoleum of Mustafa Kemal Ataturk, founder of modern Turkey, in Ankara, Aug. 30, 2013. - REUTERS/Umit Bektas

As a result of these high-level contacts, the Turkey-Qatar Military Cooperation Agreement was passed with unusual speed, first in the Turkish parliament on March 22 and then by Erdogan on March 27. The agreement went into force after its March 28 publication in the official gazette.

The agreement outlines intelligence sharing between Qatar and Turkey as well as military cooperation and the deployment of forces in each other’s territory. There is no longer any legal impediment to the return of the Turkish military to Qatar, which it evacuated Aug. 19, 1915.

In the discussion of the agreement, strong views were expressed by Turkey's parliamentary Foreign Affairs Committee. Main opposition Republican People's Party (CHP) deputy Ali Ozgunduz asked, "Does Qatar need Turkey to send soldiers to train them? There is no such need. There are US soldiers based in Qatar. Are we actually sending a military unit that would eventually join an international task force that could be set up there? We want to know. Why are our soldiers going there? Are they going to defend Qatar against somebody?"

Aytug Atici, another CHP deputy, objected, "Is there anyone who knows what the Turkish Armed Forces are going to do in Qatar? You signed a train-equip accord with the US. I say now you are going to send Turkish soldiers to Qatar to train and equip Syrian opposition in Qatar."

An official statement from the Foreign Affairs Committee noted that there was no connection between the train-and-equip agreements reached between Turkey and the United States to train Syrian opposition groups and the military agreement signed with Qatar. The agreement with Qatar, according to the statement, should not be attributed to anything beyond what is stipulated in the agreement, and it had nothing to do with US CENTCOM activities in Qatar. The statement also noted that the agreement will enable Qatar to send its military personnel to Turkey. What attracted attention was the reference to foreign military engagements in Gulf countries and that arrangements similar to the Turkey-Qatar agreement may one day be replicated with other Gulf countries.

The military agreement with Turkey has special meaning for Qatar, which is concerned by increased Iranian influence in the Gulf, the improvement of US-Iran relations and China's growing role in the Middle East. Qatar lacks serious military power and appears determined to make up for its deterrence weakness in the Gulf by entering into a military alliance with Turkey and diversifying its defensive capacities. A strong military alliance with Turkey will enable Qatar to enhance its defense industry capacity, improve the training of its army and reduce its military dependence on the United States by diversifying its military partners to counter Iranian influence and perhaps even develop stronger cooperation with NATO via Turkey.

The next question is, what has motivated Turkey to enter such an agreement with Qatar? According to Mehmet Akif Okur, associate professor at Gazi University, the Gulf is important in the global economic-political equation, and Turkey wants to have a say in the Gulf. A close military alliance with Qatar will provide the Turkish Defense Ministry with a tempting opportunity to access a lucrative market. It will also offer Turkey a way to strategically counter Iranian influence in the region and boost Turkey’s role in global security and global energy security.

Okur draws attention to two aspects of the military facility Turkey is planning in Qatar. "Primarily, Turkey has to make sure that the public will understand the risks and opportunities of setting up a base in an important region like the Gulf and ensure that there is a democratic mechanism to supervise the process of the base opening and security it will provide," he said. "No such transparent accountability that involves the civilian rule in military and security fields exists in Turkey. Such a ‘black-box’ setup allows avoiding public scrutiny and accountability by concealing every development behind the shield of secrecy."

According to Okur, military and security relations with oil-rich countries necessitate a closer look at the links between private and public interests.

Okur said it is important to clearly define the objectives of posting Turkish troops to Qatar. "Qatar is a country that had border issues with Saudi Arabia," he said. "It now fears a threat from Iran and is prone to palace struggles for power. It is trying to be influential in regional developments through its peculiar ways. All this means that the Turkish soldiers who will serve in Qatar may be subject to a wide spectrum of tensions. An appropriate strategic-logistical preparation will allow Turkey to field a strong resistance against anyone who may wish to deter Turkey from taking similar steps elsewhere.”

Security sources in Ankara told Al-Monitor that the Turkish Armed Forces subscribe to the "cautious approach" advocated by Okur. They say the Turkish military is now engaged in serious cost-benefit studies and risk analysis. For the time being, the unit that is to be dispatched to Qatar is envisaged as a reinforced battalion task force that includes a small naval element, combat engineers and special forces. The Turkish high command is working on drafting the mission, authority, duties, rules of engagement and international legal aspects of the force. These sources emphasize that the Turkish military is determined to strictly adhere to national and international legality.

Sources also point to the importance of close cooperation with US and NATO allies in the Gulf. Establishing a military presence in Qatar and carrying forward the Sunni alliance of Turkey, Saudi Arabia and Qatar is likely to begin after the June 7 general elections. A well-placed source who didn’t want to be identified said that the Turkish army is consciously moving slowly to see how Turkey's political picture develops after the elections.

In sum, although the return of Turkish soldiers to Qatar after 100 years carries strong symbolic messages, the Turkish military is approaching the issue in a serious and professional manner.

Of course, Ankara officials are asking one more momentous question that has yet to receive an answer: How will Iran respond to Turkey’s deploying soldiers in Qatar?