After rushing to Qatar's aid, Turkey may have to rethink its Mideast ties

Ankara, fearing it could be next on the Arab hit list, hastily approves sending troops to Qatar despite Turkey's poor history when intervening in Arab affairs. 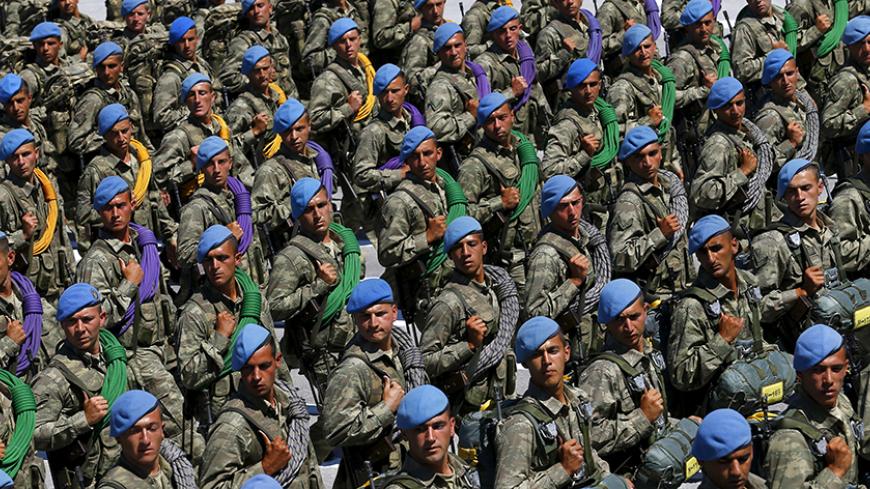 The only firm opposition to the "Let's Teach Qatar a Lesson" operation currently underway in the Middle East is coming from Turkey. Even US President Donald Trump initially loudly applauded the campaign led by Saudi Arabia and the United Arab Emirates — though he has since taken a more conciliatory tone.

The Turkish government, which had drafted a plan some time ago to send troops to Qatar to firm up a Sunni front against Iran, fast-tracked legislation needed to send troops abroad.

Turkish-Arab relations are passing through erratic times. Everyone was wondering what position Turkish President Recep Tayyip Erdogan would take in the Qatari crisis. Erdogan had won the hearts and minds of the Gulf emirs and kings earlier this year by declaring the need to "prevent the Persian nationalist expansion." Many observers thought he would take a pragmatic approach to avoid losing favor with many other countries just to please Qatar. Erdogan’s widely publicized but futile telephone diplomacy to solve the crisis was interpreted as a desperate attempt to avoid having to choose between Qatar and Saudi Arabia and its allies. But at the end of the day, Ankara decided to interpret the actions against Qatar as if they had been taken against Turkey.

Erdogan said there are other motives behind what is being done to Qatar, but he wasn't specific.

It didn‘t take Ankara long to reach the conclusion that, after Qatar, Turkey is the likely next target. After all, just like Qatar, Turkey had become a staunch guardian of the Muslim Brotherhood and was in full harmony with Qatar in the proxy war raging in Syria. All the reasons cited by the Saudi king and the US president to declare Qatar a "supporter of terror" could easily be applied to Turkey. Full support of the sanctions against Qatar from Egyptian President Abdel Fattah al-Sisi, who had toppled the Muslim Brotherhood in his country, no doubt played a key role in Erdogan's lining up with Qatar.

Turkey felt compelled to take a critical step, convinced that the developments were not confined only to Qatar. Turkey, which had earlier decided to build a base in Qatar, fast-tracked through the parliament this week two accords approving deployment of Turkish soldiers in that country and to train the Qatari gendarmerie. According to the first accord, which will be valid for 10 years and can be extended for five-year periods, there will be a Qatar-Turkey Tactical Division Headquarters to be commanded by a Qatari major general, assisted by a Turkish brigadier general. Some 500-600 soldiers will be based at the headquarters. Currently there are 95 Turkish military personnel in Qatar. An explosives demolition team with 25-30 members will also be going. The second accord will enable Turkey to train about 4,000 Qatari gendarmerie personnel.

Opposition parties in Turkey's parliament called for Turkey to remain neutral in the Arab world dispute, but their demands didn't prevent the ruling Justice and Development Party from passing the accords. In arguing the case, Ozturk Yilmaz, deputy chairman of the main opposition group, the Republican People's Party, said: “We know that some countries want to topple the emir and replace him with a new ruler. Who will our force confront? If [Qatar wants] to use those troops to preserve the Qatari ruling family, shall we be supporting that objective? Will we be involved in internal security operations of Qatar? Please don’t subject Turkey to this nasty nonsense.”

Filiz Kerestecioglu of the pro-Kurdish Peoples’ Democratic Party (HDP) accused the government of trying to drag the country into a quagmire to find new markets for the defense industry. HDP deputy Chairman Mithat Sancar warned that Turkey might soon be accused of cooperating with terrorists.

According to sources close to the Ankara government, although Saudi King Salman bin Abdul-Aziz Al Saud had developed close relations with Ankara, Qatar has a special, distinct place in Erdogan’s heart and Turkey sees Qatar as its most important ally in the Gulf.

Turkey's government has yet come up with a satisfactory explanation of what its troops will be doing in Qatar, apart from noting that, after all, Turkey has gendarmerie cooperation accords with 18 countries.

There have been several striking examples of Turkey’s earlier attempts to assist with crises in the Arab world, all of which backfired. Turkey almost intervened to protect King Faisal II of Iraq against the uprising by Gen. Abd al-Karim Qasim in 1958. Turkey almost ended up in Lebanon in 1958 upon invitation of President Camille Chamoun. Of course there is no need to elaborate here on how Turkey’s misguided actions in the Syrian crisis poisoned and complicated relations with Arab and Islamic worlds.

After openly taking sides with Qatar in the current crisis, Turkey might have to reshuffle its cards in regional relations. Against its best interests, it might have to warm up relations with Iran, just as Qatar is doing. Isn’t this why Iranian Foreign Minister Mohammad Javad Zarif immediately showed up June 7 in Ankara, saying he needed to consult with Turkey because of dangerous developments in the region?

When Turkey-Qatar military cooperation first appeared on the countries' agendas, pro-government news outlets in Turkey were regularly citing the threat from Iran. In April 2016, when then-Prime Minister Ahmet Davutoglu was signing the military accords with Qatar at Doha, Turkish media interpreted Turkey’s setting up a base in Qatar as balancing the increasing influence of Iran. For those commentators, the Turkish base reflected a Sunni security alliance among Turkey, Qatar and Saudi Arabia.

At that time, state-owned TRT Avaz TV did not mince words declaring Iran as the target. “Turkey and Qatar have taken positions very similar in Middle East crises. Their stances in assisting the opposition in Syria are the same. They took similar positions vis-a-vis the crises in Iraq and Yemen. This Sunni alliance is particularly important for Qatar. Sunni rule in Doha is uncomfortable, with the US melting the ice with Shiite Iran. Qatar doesn’t see the American forces on its land as a militarily adequate deterrent. Qatar is trying to close the gap by opting for cooperation with Turkey,” the statement said.

History has repeatedly shown that Turkey’s interventionist moves in the Arab world have always poisoned Turkish-Arab relations. We are, of course, aware that since the July 15 coup attempt, Ankara is engulfed by rumors of foreign forces plotting further coups. This is enough to explain Ankara's actions regarding Qatar today.