If push comes to shove, will Turkey defend Qatar against Iran?

Turkey's main opposition party has lots of questions about what message Ankara would be sending to Iran, and others, by deploying troops in Qatar. 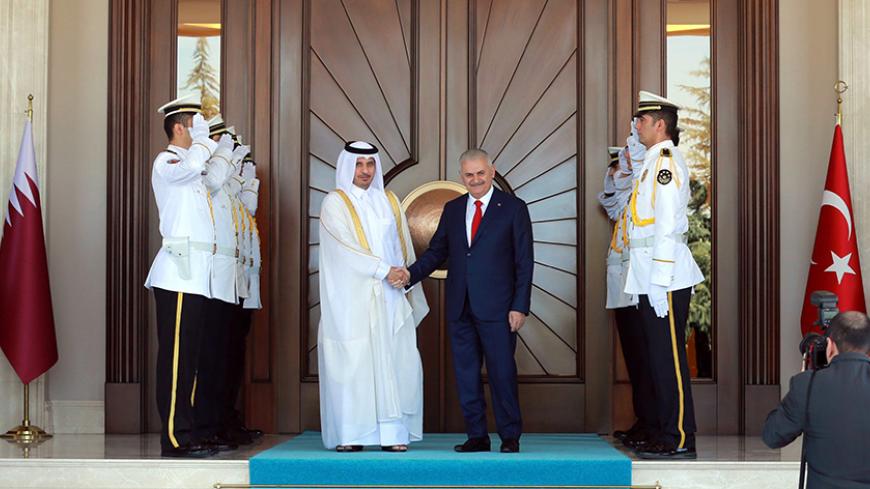 Turkey's parliament will soon consider a plethora of military agreements proposed with other countries as Ankara seeks to expand beyond its "soft-power" influence and restore its stature in areas where it used to be influential.

Turkey already has a presence in Afghanistan, Kosovo, Bosnia and Iraq with humanitarian, educational, construction and peacekeeping missions. It is adding a military dimension with a proposal to expand its presence at its base in Doha, Qatar, and with a training facility set to open this year in Mogadishu, Somalia.

These moves indeed warm the hearts of Justice and Development Party (AKP) members who dream of Ottoman times. Nationalist circles may be feeling exalted, but the political opposition in Turkey is asking: Why is Turkey building a security cover for Qatar? In return for what? Is Iran our target?

On May 4, parliament's Foreign Affairs Commission approved a Military Training Cooperation Agreement with Mongolia, a Security Cooperation Agreement with Albania, a Protocol for Gendarmerie Training Cooperation with Qatar and an Accord for Deployment of Turkish troops in Qatari territory. The draft bills of all these agreements, among others, will soon be put to a vote in the full parliament. The pact providing for deploying Turkish troops to Qatar has attracted the most attention.

Brig. Gen. Ihsan Bulbul, the deputy undersecretary of the Defense Ministry, provided some details from the commission meeting. Under the pact, Qatar and Turkey agreed to form a joint tactical division headquarters with 500-600 Turkish soldiers stationed at the base. The division commander will be a Qatari major general and his deputy will be a Turkish brigadier general.

The agreement defines the objective of the mission as “developing Qatar’s defensive ability” to conduct joint training and exercises and to "carry out other missions two countries agree on." The agreement says all costs of setting up the base and its operations will be borne by Qatar. At the end of 10 years, the open-ended deal will be automatically extended for five years unless one of the parties calls it off.

According to minutes of the commission deliberations Al-Monitor obtained, officials of the Foreign Ministry, Defense Ministry and Gendarmerie General Command had problems responding to opposition representatives' questions. Republican People's Party (CHP) Deputy Oguz Kaan Salici wanted to know why Turkey is placing such importance on Qatar, whose annual volume of trade with Turkey doesn’t exceed $1.3 billion. Foreign Ministry Deputy Undersecretary Umit Yardim answered by saying that the Islamic State, al-Qaeda and followers of Fethullah Gulen constitute a joint threat and that Qatar had led the countries that supported Turkey after the July 15 coup attempt. Moreover, he said, Qatar is an ally of the United States and has strategic importance. But he wasn't able to satisfy his questioners by explaining what he meant by strategic importance.

Salici, noting that foreign forces using bases in Turkey are meeting their own expenses, said he didn’t get proper responses to his questions. He asked again, “This force will all have all the privileges on Qatari land and all its expenses will be met by Qatar. Qatar is inviting in an experienced military force. This means, ‘Come defend us.’ What is Turkey going to get in return for defending Qatar? If Turkey is not building security umbrellas for Qatar and Saudi Arabia against Iran, and we are dragged in [to a confrontation with Iran] because of what is happening in Yemen, [then] what is this all about?”

Qatar is rich in oil and natural gas. But some CHP members question Qatar's significance to Turkey for a number of reasons. With an area of some 4,400 square miles, Qatar is about the size of the island of Hawaii. Turkey, on the other hand, at 302,535 square miles, is a bit bigger than Texas. Turkey's population is about 79 million; Qatar has 2.6 million, and only about 313,000 of them are Qatari citizens. Qatar has only a modest military force; its army has 11,800 personnel. In a way, it owes its security to 10,000 US soldiers at Al Udeid base.

Qatar has spearheaded proxy wars in Libya and Syria and has participated in operations in Bahrain and Yemen when pushed by Saudi Arabia. It's perfectly natural for Qatar to feel the need to develop a joint defense concept with a strong power other than the United States. But why would Turkey enter such a military relationship with Qatar, especially given Turkey's current involvement in the Syrian civil war? CHP deputies feel that Turkey has been made part of the sectarian polarization between Iran and the Gulf countries, and that all these agreements are targeting Iran.

Another CHP member of the Foreign Affairs Commission, Mevlut Duru, told Al-Monitor there were concerns about vague areas of the accord with Qatar. “It's an open-ended agreement. It's not clear what it's about. There are obscure expressions such as ‘all kinds of assistance.’ Our foreign and defense ministries cannot explain what kind of assistance we are talking about. If you ask us, there is no need for Turkey to set up a base in Qatar. This can only be a move against Iran. I can’t find any other explanation for this agreement. There are efforts to form a Sunni bloc led by Saudi Arabia,” he said.

“Qatar is meeting all the expenses of the base in Doha. Are they hiring us to work as their gendarmerie? This is a totally unwarranted venture for Turkey. This commission has approved the draft, but there will be serious debates on it when it comes to the parliament.”

When then-Prime Minister Ahmet Davutoglu signed the accord for the Doha base in April 2016, diplomatic and political sources in Ankara made the following points:

At that time, state-owned TRT TV summarized the viewpoints of government circles: “This agreement is also significant to find new markets for Turkey’s defense industry. Turkey and Qatar have been taking nearly identical approaches to the crises in the Middle East. They share the same position in supporting the Syrian opposition, as well as regarding the crises in Iraq and Yemen. The accord has a further significance for Qatar because the Sunni government in Doha is uneasy with the melting of ice between the United States and Iran. Doha's government doesn’t consider the American soldiers in Qatar as an adequate military deterrent, hence Qatar’s decision to overcome the deficiency by cooperating with Turkey.”

Turkish government circles have a tendency to treat the Qatari base within the context of US-Turkey competition. But in its decision-making, Qatar can't operate independently of the United States and Saudi Arabia.

Actually, until crises erupted in Syria, Bahrain and Yemen during the Arab Spring in 2011, Qatar was following a balanced approach toward Iran despite all the pressures exerted by Saudi Arabia. Qatar was even saying that it wouldn't allow the United States to use its bases there in an operation against Iran. Naturally, the fact that Qatar was sharing the South Persia Natural Gas Basin with Iran played a part in that approach.

But Qatar found itself in the anti-Iran camp following the militarization of the Arab uprisings. It isn’t clear anymore whether its decision to avoid tension with Iran still stands. Surely, as a member of the Gulf Cooperation Council, Qatar could not keep its distance forever from the evolving crisis between Iran and Saudi Arabia.

Now after the election of US President Donald Trump, the United States is returning to its anti-Iran policies, and Iran-Saudi tensions are escalating, signaling potential storms in the Gulf. On May 2, Saudi Defense Minister Mohammed bin Salman inflamed the tensions by saying that in case of a war, the Saudis will try to fight it out in Iran before the war reaches Saudi soil.

Iranian Defense Minister Hossein Dehghan responded, “If the Saudis launch a thoughtless action, the Iranian army will annihilate all their kingdoms except Mecca and Medina.”

Many observers are worried by the rise in Gulf tensions and Turkey’s military partnership with Doha and Riyadh. Daily Hurriyet columnist Mehmet Yilmaz recently asked a pertinent question: “Are we going to launch a war against our joint enemy? Will the cost to us of the comprehensive military pact with Saudi Arabia be getting entangled in a war that has nothing to do with us?”

It is obvious that with the growing tensions, Saudi Arabia hopes to rely on Turkey’s military capacity as Ankara tries to promote itself as the voice of the Sunni world.

Despite all of these developments, is it possible to label all Turkish steps as polarization against Iran? No doubt the military cooperation with Qatar and Saudi Arabia is progressing under the shadow of Iran-Gulf contradictions in Syria and Yemen. When Ankara is taking these steps, one inevitably remembers aspirations to form a Sunni bloc targeting Iran under the label “Islamic Alliance Against Terror,” or to set up an “Islamic NATO” with the participation of Turkey, NATO's second-largest military force, and Pakistan, which has nuclear weapons in its arsenal.

Turkey’s addition of "hard" versus "soft" military dimensions to its partnerships in the Arab world has another motivation: finding new customers for its developing defense industry. Both are certainly among the dreams of the AKP government.

Selling itself as an element to counterbalance Iran’s growing power is a way for Turkey to form military cooperation with Qatar and Saudi Arabia, but it is also a reflection of Turkey’s undeclared, but undeniable, passion to become a regional power.