From Israel’s viewpoint, the missiles that Iran launched June 18 failed to hit their target, but demonstrated the missile construction and launching capacities developed by Iran. 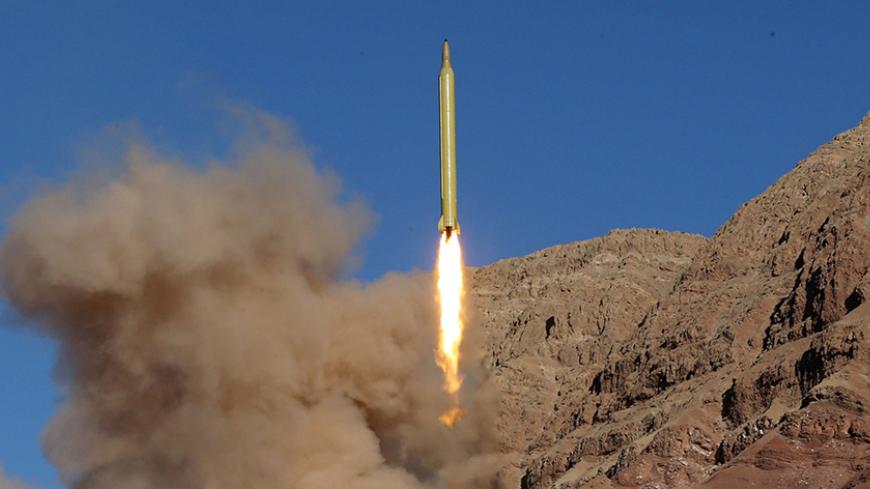 A ballistic missile is launched and tested in an undisclosed location, Iran, March 9, 2016. - REUTERS/Mahmood Hosseini/TIMA

In the hours after Iran launched ballistic missiles at Islamic State targets in Syria on June 18, Western intelligence sources guessed that these were Shahab-3 medium-range ballistic missiles. The following day, this assessment changed to Zulfiqar ballistic missiles instead. These relatively sophisticated missiles have a maximum range of 700 kilometers (435 miles), are equipped with independent navigation systems and are able to adjust trajectory in the air. Zulfiqar solid-fuel propellant rockets are produced by the Iranian military industry.

These kinds of missiles constitute one of the greatest nightmares known to Israeli security systems. Should Hezbollah acquire them, for instance, they could be used to target Israeli air force bases and other strategic targets as well. Therefore, in the initial hours after the Iranian launch, key Middle East players viewed the strike with great severity. It was the first time in about 30 years that the Iranians launched ballistic missiles at a neighboring country, while violating the sovereignty of a third state (Iraq).

“This was a message to the Sunni axis,” a high-level Israeli security official told Al-Monitor on condition of anonymity. “But not only that, it was also a message directed at basically the entire region and its players, including the US coalition and, of course, Israel."

The real picture began to emerge a day later, and a partial sigh of relief was heard in Tel Aviv and Jerusalem. According to various intelligence assessments, only one of the missiles (out of seven in total) struck anywhere near the target. Most of them fell on the way, while another evidently fell in the environs of the target, but not near it. The Zulfiqar is reputed to have a precision of up to 10-20 meters (33-66 feet).

“In other words,” the Israeli source said, “if it was supposed to be an experiment, it was a failed experiment.” Israel's Chief of Staff Lt. Gen. Gadi Eizenkot spoke at the Herzliya Conference on June 20, saying, “Iran’s operational achievement falls short of what was described in the media … far from an exact hit. Nevertheless, the Iranian military industry has a regional effect [on the entire Middle East].”

Some in Israel tried to emphasize the Iranian weakness after the missile strike. An Israeli security expert told Al-Monitor on condition of anonymity that the fact that Iran is not activating its air force within Syria “proves that their air force is outdated and ineffective. They know that any Iranian plane appearing above eastern Syria would be brought down by the US coalition.”

Another issue is that the "precise" Iranian missiles simply do not deliver; the percentage of hits is very low. And after all this, remains the Iranian half-full cup. “The Iranian action,” said a former Israeli top brass officer, “proves several things." He told Al-Monitor on condition of anonymity, "First, they know how to launch ballistic missiles. They have operational launching facilities spread out over the territory, which know how to carry out the mission. Second, they know how to make this kind of decision. It’s not an easy decision to make. Third, they have signaled the entire region that they are here to stay. They want everyone to know that they are a key, legitimate player that knows how to respond and is equipped with a long arm that knows how to strike in the depths of the enemy.”

The timing of the launch was also significant. “We are in the midst of a race for territorial continuity,” a senior Israeli military source told Al-Monitor on condition of anonymity. “In these very days, [Syrian President Bashar al-] Assad’s army is making a supreme effort to take control of the border checkpoints with Iraq, where Shiite militias operated by Iran are stationed. This signals the end of another stage in the creation of Shiite territorial continuity from Tehran to the Mediterranean Sea.”

Meanwhile, Israel is doing everything possible to thwart this territorial continuity, and recently the United States has begun attacking the convoys of Assad’s army in the region. On June 19, a Syrian battle plane and armed drone were intercepted there. This caused the Russians to “declare” the area west of the Euphrates River a “no-fly zone” and threaten that any aircraft patrolling overhead would be shot down.

The Iranians launched the missiles at an especially sensitive point in time, when the Russian-Iranian-Shiite coalition and American-Sunni-Israeli axis are facing off. Both sides have their fingers on the trigger, and the great prize hangs in the balance.

Israeli Defense Minister Avigdor Liberman, known for his good contacts with Moscow, is also worried. According to security sources, behind closed doors Liberman blesses the tactical cooperation between Israel and Russia and the apparatus built by both armies to neutralize accidental cases of “friendly fire,” while also preserving maximum freedom of movement for both sides.

Nevertheless, Liberman admits that, on the strategic level, Russia is inflicting heavy damage on Israel by assisting Iran in creating Shiite territorial continuity and opening additional fronts against Israel on the Golan Heights.

The launching of the Zulfiqar missiles adds fuel to the volatile regional fire. The launching also coincided with the report in The Wall Street Journal that Israel is strengthening its cooperation with groups of Syrian rebels on the Golan front to prevent the Shiites from creating a presence there. This bit of news was denied by Israel, but well known by the other players in the Middle East. “Everything is volatile and shaky,” a senior Israeli army official told Al-Monitor on condition of anonymity. “The fact that we have managed to avoid an overall eruption of violence in an area involving players from the superpowers is nothing short of a miracle,” he said, “but the danger is still present.”

Also talking at the Herzliya Conference, Israel’s air force commander Gen. Amir Eshel called the situation in the Middle East “a discourse of words and rockets.” Eshel, like Eizenkot, continues to warn Lebanon and residents of southern Lebanon of a possible flare-up. Israeli spokespeople constantly repeat and emphasize that Israel does not want war, but make it clear that should violence erupt anyway, Lebanese residents would be wise to leave their homes — because every fourth house in southern Lebanon boasts a storage shed with rockets and missiles. According to Eshel, “If war breaks out in the north, we have to open with all our strength from the start," to demonstrate Israel’s aerial might.

The various spokespeople emphasized that no side in the northern equation is interested in a war. The problem is that when everyone talks about war and polishes their aircraft and missiles to be ready "just in case," at the end of the day, it might just happen.