For Israel, the regional power balance after the end of the Islamic State could actually mean a Hezbollah reinforced by the Lebanese army, with Iran present on the Golan Heights front. 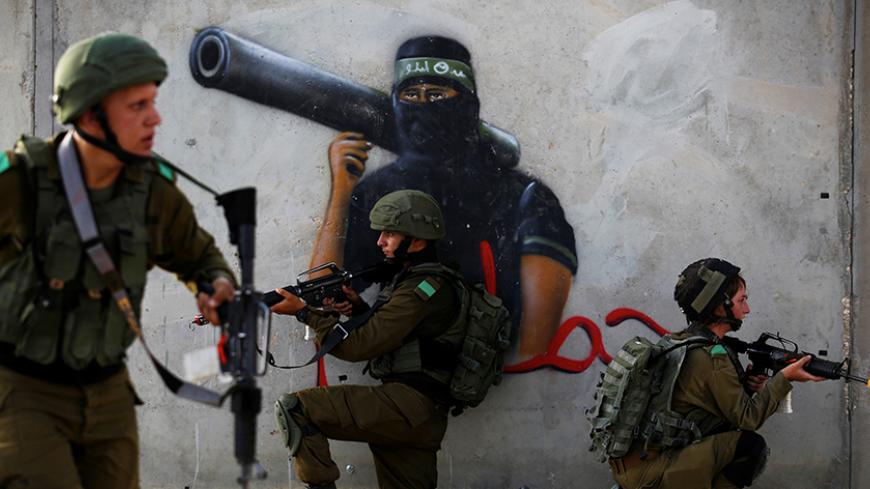 Israeli soldiers from the Home Front Command Unit hold their weapons as they take part in an urban warfare drill inside a mock village at Tze'elim army base in Israel's Negev Desert, June 11, 2017. - REUTERS/Amir Cohen

Comments from senior Iraqi officials after the conquest of Mosul correspond with the current assessment by Western intelligence agencies that the collapse of the Islamic State's caliphate is inevitable. While those same intelligence sources claim that the fall of Raqqa will take time, it will happen in the end. What this means is that the surviving combatants in Islamic State (IS) territory will attempt to find refuge in more distant and remote regions so that they can continue to export their global jihad, mainly against Western targets in the United States and Europe.

Given the current situation, the various players in the Middle East are preparing for the "day after" IS, when it no longer has a physical presence in the region. That could happen at any time in the next year or two. In other words, it is right around the corner.

"The new Middle East is a strange place," a senior Israeli military official familiar with the northern front told Al-Monitor on condition of anonymity. "The days of seeing things in black and white, of seeing groups painted as enemies versus those groups we consider allies, are over. Many of the players are now both. It all depends on the perspective, particular arena and interests of the moment.’’

Israel points to recent remarks in March by Lebanese President Michel Aoun, who said that Hezbollah serves in a complementary role to the Lebanese army. One top Israel Defense Forces (IDF) officer could not hide how pleased he was with this comment. He even sent Lebanon a message of his own through the commander of the United Nations Interim Force In Lebanon, with a special thank you to the Lebanese leader. Another senior IDF officer explained to Al-Monitor on condition of anonymity: "The president's comments were, in effect, an explicit admission that Hezbollah and the Lebanese army are one and the same. What this means is that in the next war, which we hope does not break out, we will no longer need to avoid attacking Lebanese infrastructures like we did last time. Michel Aoun made a strategic error."

Meanwhile, Israel is investing most of its efforts on keeping the United States on the right side — i.e., its side — of the conflict. Israel is very concerned about the possibility that US President Donald Trump will attempt to instill order in the Middle East on the day after IS by making a special deal with the Russians, which would allow the Shiite axis stretching from Tehran to Beirut to acquire a foothold in the Golan Heights.

Another issue at the top of Israel's agenda is the fact that Iran has begun building factories in Lebanon to manufacture relatively accurate rockets and missiles. According to foreign reports, the Israeli Air Force has so far been able to strike most of the convoys leaving Damascus for Beirut with their cargoes of "tie-breaking" weapons, which could harm Israel's unchallenged aerial superiority in the region or allow Hezbollah to launch attacks on strategic targets in Tel Aviv with pinpoint accuracy. In order to get around the aerial siege attributed to Israel, the Iranians are now planning to "reduce ranges" and provide Hezbollah with the option of manufacturing these missiles themselves.

The Israeli leadership is engaged in a bitter debate as to whether such factories in Lebanon are a casus belli. In other words, do they constitute the crossing of some red line, which is unacceptable to Israel? If this approach gains the upper hand, Israel will try to attack or otherwise torpedo the construction of these factories, no matter what the price may be. It would do this even if it would require an aerial strike to destroy them, just as foreign publications claim that Israel destroyed Syria's suspected nuclear reactor in Deir ez-Zor in 2007. Since such a move would set off a huge conflagration in the Middle East, the decision to launch the attack will not be an easy one.

So far, Israel and Hezbollah are locked in a state of mutual deterrence. It is not in the interest of either of them to launch a conflict that would result in unprecedented destruction in Lebanon but cause damage to Israel too. At the same time, it is obvious to Israeli decision-makers that Hezbollah is currently in a position of weakness, having lost some 1,500 fighters in Syria, with thousands more wounded. What this means is that Hezbollah would be unable to operate effectively on another front, this one with Israel. Nevertheless, there is no Israeli leader capable of making the intelligent decision and reacting to the construction of these missile factories in Lebanon. Instead, Israel's leaders are making do with a long series of speeches and declarations by top military and political officials over the past two weeks. One high point of this was the recommendation June 21 by the outgoing commander of the Israeli air force, Maj. Gen. Amir Eshel, to the people of southern Lebanon that they hurry and flee their homes if and when war breaks out.

There are now those in Israel who confess to the sin of committing a "substantial historic mistake" in its early days by choosing to engage the Shiites in conflict rather than accepting them and forming an alliance with them, just as Israel did with the Druze. "The Shiites are a minority and are considered heretics by the Sunnis, just like the Druze and the Yazidis," a senior Israeli military official told Al-Monitor on condition of anonymity. "They did not understand this yet in 1948 [Israel’s Independence War] and again in 1982 [First Lebanon War]. Instead of reaching out to the Shiite population in Lebanon and offering them some kind of arrangement, which would include mutual defense, we have turned them into our enemies. We will come to regret this for generations, because the way that the Shiites perceive the region and their status in Islam makes them much more disposed than the Sunnis to cooperate with us. We can only consider changing course once the Iranian Revolution is over." Then he added, "but no one knows when that will be."