Despite the efforts of Israel's state attorney to prevent his early release, former Prime Minister Ehud Olmert will walk out of prison on July 2, memoir in hand. 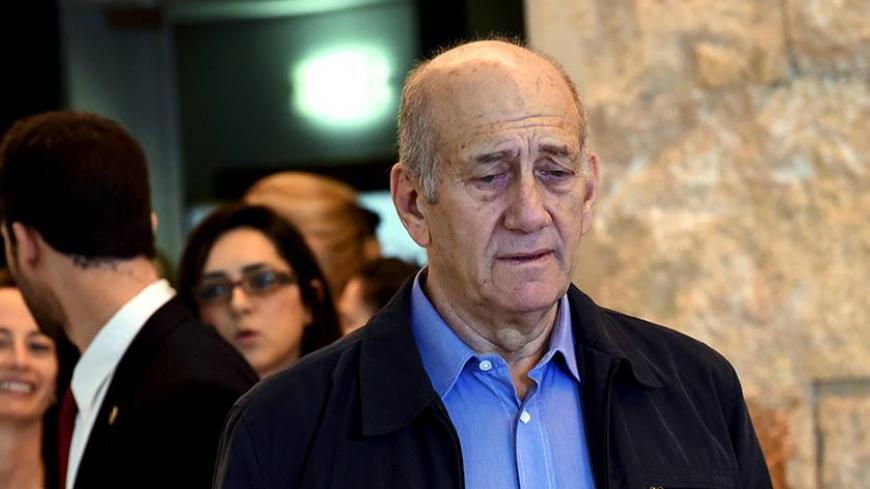 An Israeli parole board announced on June 29 that it had granted former Prime Minister Ehud Olmert's request for early release. But the witch hunt over the last 10 days (well before the decision was made) raises some difficult questions about the motivation of the state attorney's office in its efforts to keep Olmert in prison for a few more months.

The state attorney did not immediately give up fighting to prevent his early release even after the parole board made its call. The office was actually about to appeal the decision, but public opposition to what seemed like a witch hunt was very intense. Luckily for Olmert, the pressure seemed to work, and the state attorney did give up. After a long, heated discussion and with the encouragement of Attorney General Avichai Mandelblit, the state attorney's office decided to drop its appeal.

Olmert will be released on the morning of July 2 after serving 16 and a half months of his 26-month sentence for corruption. The envelopes of money that he received from businessman Moshe Talansky, his role in the Holyland real estate case and his attempts to interfere with legal proceedings are just some of the charges that were brought against him. The trials for these and other scandals went on for years and eventually forced him to resign as prime minister. He will always bear the mark of Cain as the first Israeli prime minister to go to prison. Despite his achievements and bold diplomatic initiatives, his legacy will always be marred by corruption.

Olmert's fall was nothing short of dramatic. He paid for his deeds with being put behind bars as the world watched and an abrupt end to his public life. He once had access to Israel's most sensitive secrets and was close friends with US President George W. Bush and Secretary of State Condoleezza Rice. According to foreign news sources, he gave the order to destroy the Syrian nuclear reactor in 2007. He led Israel through the Second Lebanon War and Operation Cast Lead in Gaza. For him to be castigated and removed from society is itself an unbearable punishment.

Throughout most of his sentence, Israelis generally heard about Olmert in the context of his prison furloughs. Suddenly, as the parole board prepared to discuss his early release, our lives were interrupted by the latest Olmert scandal, this one concerning his alleged smuggling of secret documents out of prison for his memoirs, allegedly through his visiting lawyer.

In its presentation to the parole board, the state attorney's office portrayed Olmert as a dangerous person who had reverted to his old patterns of criminal behavior. A person who would not hesitate, if the money was right, to expose state secrets in his memoirs ahead of their publication by the Yedioth Ahronoth publishing house, scheduled for 2018. The state attorney's office showed dogged determination throughout the confusion, culminating in an unprecedented raid on Yedioth Ahronoth. Police confiscated materials and emails that had nothing to do with Olmert's book. At the same time, senior officials in the state attorney's office briefed journalists and political commentators on the "serious misdeeds of the former prime minister," hinting that he used his lawyer to smuggle particularly sensitive and as yet unpublished materials from prison, thereby endangering state security. Obviously, their goal was to stir negativity among the public and influence the parole board.

A few days later, Olmert was hospitalized at the Sheba Medical Center because he was not feeling well. Social networks were soon inundated with a photo of him in his hospital room, wearing his pajamas and looking gaunt and sickly. According to one claim, people close to Olmert released the photo in an attempt to win pity and the support of the parole board, adding more fuel to the fire. Politicians once considered his bitterest rivals, such as Minister Yuval Steinitz, called for his release. The overwhelming public opinion was that the state attorney's office was trying to settle a score with the former prime minister.

Why? It is quite conceivable that in certain chapters in his yet unpublished book, Olmert attacks the legal establishment, including public figures still in office, and that will provoke the ire of the state attorney's top brass. It is also possible that Olmert's personality, his arrogance and his refusal to keep a low profile even during his prison sentence also motivated the state attorney's office, as did the support of senior media figures, who praise him as one of the best prime ministers Israel has ever had.

Olmert's book is expected to be released next year. Thanks to the hubbub that the state attorney's office has stirred up, it is likely to see vigorous sales. Olmert can also make a good living from the international speaker circuit. After all, he is a former prime minister and the issues that he dealt with are still relevant today. On the other hand, even while he speaks about his negotiations with Palestinian President Mahmoud Abbas to reach a permanent settlement and his close ties with President George W. Bush, Olmert will never be able to erase his reputation as the most corrupt prime minister in Israel's history. And that is how it should be.

Olmert was just as reckless in his handling of affairs of state as he was with his personal scandals. The Second Lebanon War in 2006 and the ensuing Winograd Report, which accused him of responsibility for that war's failings, are good examples. Israel's northern border has enjoyed quiet since 2006, but the flawed way that Olmert made his decision to go to war has not been erased, neither have the consequences of the lengthy siege he imposed on Gaza as prime minister.

In a video clip released by Olmert on the morning he began his sentence, he hinted that he was the victim of a legal and political witch hunt and suggested "that the legal snowball into my affairs got bigger from an array of other reasons that are not just legal." As a free citizen and future author, Olmert will eventually tell his story. He will always bear his mark of Cain, but it is also in the public's interest to expose the problematic behavior of the country's legal establishment.