Charges against former Prime Minister Ehud Olmert and a complaint of sexual harassment against Energy and Water Minister Silvan Shalom emphasize the freedom of the Israeli legal system to act. 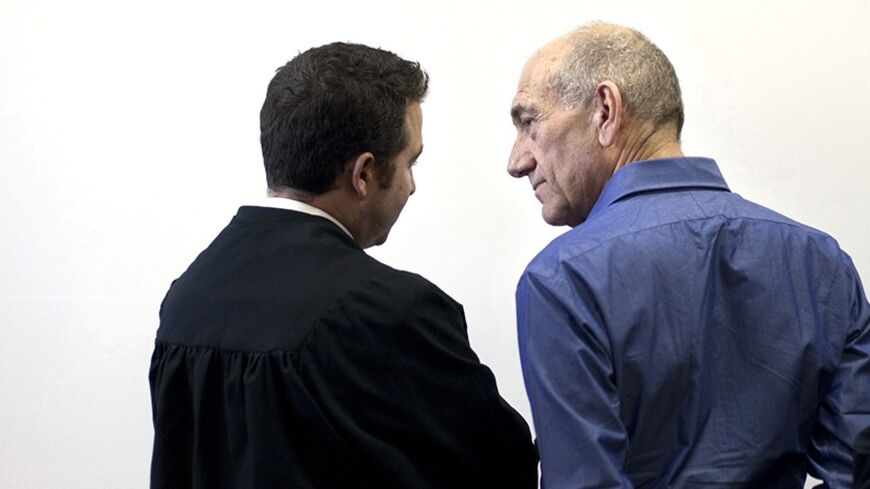 Will a former prime minister be arrested and brought in for police questioning for the first time in Israel’s history? Is there a chance that for the first time in the annals of the state a former prime minister will be sentenced to a prison term? These questions are emerging after the latest twist in Ehud Olmert’s endless criminal prosecutions. Along with them, another fundamental question arises: Is Israel a corrupt state?

Let’s start with the good part: Israel’s law enforcement system enjoys total freedom, independence and a significant degree of power vis-à-vis the regime, as well. At a time when Turkish Prime Minister Recep Tayyip Erdogan blocks access to Twitter and YouTube, in Israel anyone can be investigated, from the president through to the prime minister on down. The criticism leveled at the government from every direction is lethal and often brutal, no one is immune and the law enforcement system does not avoid weeding out governmental corruption. By the way, that same law enforcement system, the police and the state attorneys, stands helpless against organized crime, growing violence and criminality. In these areas, the police in Israel are weak, ineffectual, lacking real resources and quality personnel. Israel's police officers and investigators achieve their glory on the backs of the politicians who are under investigation every other day, sometimes in assembly-line fashion.

Former President Moshe Katzav is serving a long sentence in an Israeli prison after being convicted of rape and other sexual offenses. Former Finance Minister Abraham Hirschson got out last year after doing no small amount of time for fraud and bribery. Knesset member Aryeh Deri, head of the Shas Party and former minister of interior, was convicted in 1999 and sent to prison more than a decade ago. Many other ministers were sentenced to jail terms for various corruption affairs, dozens of politicians have been interrogated by police, some were charged, some were convicted, some were acquitted, in strange and sundry affairs that sometimes create the impression, wrongly so, in my opinion, that Israel is the Middle East branch of the “House of Cards.” It seems to me that the comparison is totally unfounded.

Here is a partial list of the events of the past week, ending on March 28: Silvan Shalom, the water and energy minister, formerly minister of finance and foreign affairs, who intended to run for the position of president (the elections will be held in a few weeks and President Shimon Peres’ term ends this coming July), was questioned by police under caution after a secretary in his former office complained that he had had sexual relations with her 15 years ago, abusing his position and authority over her. Given the time that has elapsed, the offense attributed to Shalom is past its statute of limitations and he cannot be prosecuted for it (if and when it comes to this), but the case has not yet been closed and the police are waiting to see if any other women come forward to complain about more recent events. As of now, Shalom’s presidential prospects appear a lost cause, even if the case against him is closed.

A former army spokesman and an aide to the former army chief of staff, both senior reserve officers, were arrested (and freed 24 hours later) and questioned by police on various suspicions related to the convoluted ''Harpaz affair'' (concerning tension between then-chief of staff Ashkenazi and then-Minister Barak), which has been bugging the top military echelons and the media in Israel for four years. Former chief of staff Lt. Gen. Gabi Ashkenazi is expected to be called in for questioning soon, as well. His bitter rival, former Defense Minister Ehud Barak, and some of his people, might also be questioned in this affair, although it’s clear to all that the police are mostly focused on Ashkenazi’s office, mostly because of the discovery of 60,000 recorded phone calls made by senior officials in that office during Ashkenazi’s four-year tenure as chief of staff.

On top of them all stands the sorrowful figure of Ehud Olmert, Israel’s prime minister until five years ago, 2009. Many prime ministers were investigated before him: Ehud Barak, Benjamin Netanyahu, Ariel Sharon. Each had a case against him, but these were closed due to lack of proof or lack of guilt. Olmert’s legal saga has been ongoing for eight years and had seemed to be coming to an end. He has already been tried on three different charges relating to fraud, bribery and breach of trust, and was acquitted last year of most of the charges against him. The judges convicted him of one relatively minor offense, which enables him to carry on with his political plans as usual. Olmert wants to come back and run for the position of prime minister.

Meanwhile, the state appealed his previous acquittals and is conducting another trial against him in a major fraud and bribery case connected to a giant Jerusalem construction project from the time Olmert served as mayor. Olmert is alleged to have helped push through permission for the building project, known as “Holyland Park,” in return for different benefits. This case has been tried in Jerusalem District Court for the past year, before Judge David Rosen, who is supposed to pronounce his verdict this coming Monday, March 31.

In recent weeks, a dramatic soap opera has been gripping Israel, having to do with the relationship between Olmert and his secretary and office manager for 35 years, Shula Zaken. Until recently, it had seemed that Zaken would do anything for Olmert, in all the indictments and trials. And that’s the way it was. She was a defendant in previous trials as well, in which he was acquitted and she was convicted, taking on herself some of the charges and providing Olmert with a legal umbrella.

The ties between Olmert and Zaken are close, reminiscent of a father-daughter relationship. Zaken, a young Jerusalemite was plucked out of the law office where she worked as an unskilled junior secretary by Olmert when he started his political race. She became his ultimate confidante for 35 years, to the extent that his and her families became virtually intertwined. Over the past year, the state prosecution has invested tremendous efforts in an attempt to persuade Zaken to turn state’s evidence against Olmert, to tell all she knows and to enable law enforcement authorities to indict him on various charges, and perhaps to even launch additional investigations on other charges. Zaken firmly rejected all of the attempts.

Suddenly, several days before the court was to hand down its verdict on all the defendants in the affair (among them Olmert and Zaken), she broke down. In hectic, tense, dramatic last-minute negotiations, a plea bargain was signed between Zaken and the prosecution this past Thursday, March 27, four days before the court’s ruling. The rare legal development, unprecedented at such a level, will force Judge Rosen to decide whether, on the eve of pronouncing his verdict, he will agree to the prosecution’s request and postpone his ruling, allowing the loyal secretary to take the stand and raise the curtain on the misdeeds of her longtime boss and benefactor.

The new material with which she presented the prosecution has to do with alleged attempts by Olmert to persuade her not to sign a deal with the state. This means suspicion of obstruction of justice and aggravated harassment of a witness, serious offenses in Israel’s legal system. Zaken is thought to have secretly recorded Olmert in the past few months and presented the audio tapes to investigators. In light of this development, the judge will be hard-pressed to turn down the prosecution’s request and to insist on completing the trial on Monday, as planned. This drama, which has all the elements of a riveting political television series, will likely go on for a long time. Be Rosen’s verdict what it may, before or after Zaken takes the witness stand, this affair will reach the Supreme Court, because the losing side will appeal and the saga will continue. Olmert’s political comeback appears farther away than ever. His chances of being prime minister are very similar to those of Silvan Shalom being president.

Political pundits and close associates regard Zaken’s betrayal as an almost incomprehensible act. The ties between them over the years were so personal, tight, familial, emotional. For Shula to betray Ehud is like Chicago Mayor Rahm Emanuel betraying President Barack Obama, or former Secretary of State Condoleezza Rice betraying former President George W. Bush, one of Olmert’s associates told me this week. It was clear to everyone that Shula was sacrificing herself so that her “life’s work,” Ehud Olmert, would return to his rightful place, in the prime minister’s office in Jerusalem. But something went wrong along the way.

The impending verdict and sentencing, which would have sent Zaken to prison for many years, appear to have worn her down. In the plea bargain, the state promised to seek only 11 months in jail for Zaken. With a third off for good behavior, this is a short period which she will withstand. But it’s not just the jail sentence. The relationship between the two isn’t what it was. In recent months, Olmert’s defense attorneys have spoken out in public against Zaken on several occasions and sounded pointed criticism against her and her conduct. Olmert, too, gave her a cold shoulder. At the end of the day, what really matters in these stories is dignity. When Zaken felt Olmert had offended her honor, she fell apart. And together with her, so did the historic alliance between the two, an alliance that led the two of them to the highest office in the land and might now lead them to completely different places.