The grand political plans of former Prime Minister Ehud Olmert suffered a mortal blow with the testimony of his former confidante Shula Zaken, leaving the center-left without a leader for the next elections. 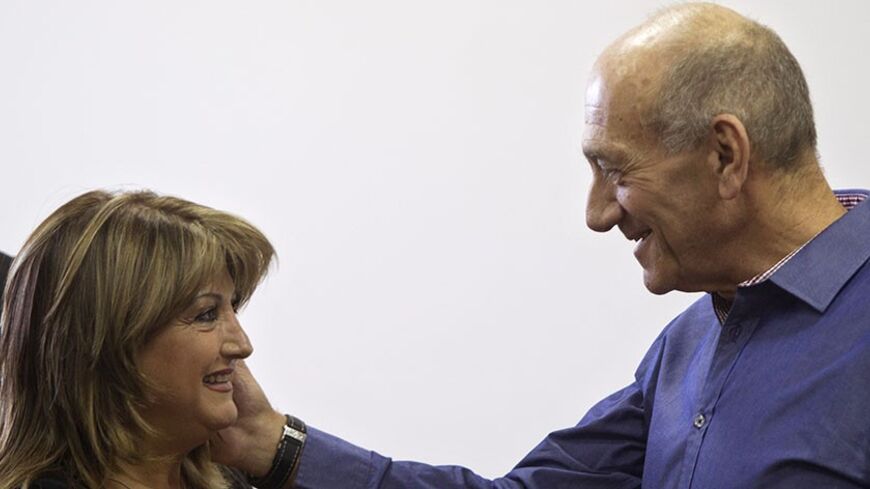 A sigh of relief could be heard from the defense team of former Prime Minister Ehud Olmert last week. The State Prosecutor’s Office had decided, on March 5, to reject a proposal by Olmert’s former Bureau Chief Shula Zaken, to sign an agreement making her a state witness in the Holyland Park real estate case. In this affair, Olmert is accused of accepting a bribe from the project's entrepreneurs when he was Mayor of Jerusalem and Minister of Industry, Trade, and Employment, in exchange for helping to advance it. Yet despite the decision by the State Prosecutor’s Office, Olmert has no reason to celebrate. Zaken’s decision to break a vow she made seven years earlier that she would not testify against the former prime minister could put the final nail in the coffin of any effort by Olmert to make a political comeback.

Zaken and her lawyers took into consideration that at such a late stage of the court’s deliberations, after she had already completed her testimony and right before the court delivers its verdict, the chances of her becoming a state witness were slim. Nevertheless, she decided to go for broke against her former boss and reveal the secrets she knew about the Holyland Park case and concerning also other accusations made against Olmert in earlier cases. Concerning the “Cash Envelopes” case, for instance, in which Olmert was acquitted in July 2012, Zaken gave testimony this week that the former prime minister used the money that he received illegally from businessman Moshe “Morris” Talansky to buy himself suits and expensive cigars.

Shula Zaken’s decision is a case of “Let me die with the Philistines” (Judges 16:30), made only after she realized that she had probably no way of avoiding a guilty verdict in the Holyland Park case and after she heard Olmert’s attorney accuse her in the media of giving false testimony in that case. She acted out of vengeance against a man who she believed sacrificed her to extricate himself. She acted consciously to destroy any chance that Olmert had of returning to the upper echelons of Israeli politics, as he hoped to do.

As such, her late testimony is much more than just “a collection of vile lies that even the State Prosecutor’s Office didn’t believe,” as Olmert’s attorneys were quick to call it. Her testimony delivers a mortal blow to any chances Olmert may have had to run for the office of prime minister at some time in the future. Even if it has no real impact on the outcome of the trial, it will certainly have public implications whether the former prime minister can continue his career in politics, and on the political system as a whole in the next Knesset elections.

It is an open secret that ever since the last elections, Olmert has waged a low-intensity campaign to take back the prime minister’s office. Two things made this possible: his surprising acquittals in the “Rishon Tours” and “Cash Envelopes” cases (in the latter he was found guilty of only the relatively minor charge of breach of trust), and the leadership vacuum in the Israeli left and center. People close to Olmert are trying to position him as the only leadership alternative to Prime Minister Benjamin Netanyahu among the Israeli public and as the one person capable of uniting the centrist and left-leaning parties behind him in a single political bloc.

Before the last elections, Olmert participated in an extensive range of initiatives to have him run against Netanyahu. At the time, he sat in his office in the luxurious Millennium Building in Tel Aviv, receiving visits from all the “refugees” from the Kadima party, who pleaded with him to save their party and themselves from electoral annihilation. Former senior members of his party admitted their sin of helping to depose him in 2008 in the wake of the Talansky affair. Stories released then, that former Knesset member Dalia Itzik refused to leave his office until he agreed to return to Kadima, were not that far from the truth. On the other hand, polls commissioned by Olmert dampened his enthusiasm, when they showed that under his leadership, the party would win 12 seats at most.

Though the fantasy of Olmert's comeback started disintegrating, the former prime minister never abandoned it. Ever since the election, he has been operating on the basis of a strategic plan intended to prepare the groundwork for his return to politics. He meets with political figures and strengthens his ties with public figures he wants on his side in the next election campaign. The former head of the Mossad, Meir Dagan, the former head of the Shin Bet, Yuval Diskin, and the head of the Council for Higher Education, Manuel Trachtenberg, are all considered particularly close to him. At the same time, he has sent feelers out to former Communication Minister Moshe Kahlon about the possibility of them cooperating politically, and he is in regular contact with the Chairman of the Kadima Party Shaul Mofaz, who still has a party platform that could serve Olmert when he returns.

And then there are his frequent public appearances. Olmert loves to give speeches, both in Israel and overseas. He also loves to fire off veiled critiques of Netanyahu from the podium. It is the same message at all of these appearances: He is the only person capable of finding a solution, when dealing with the Palestinians. In April 2013, for example, at a private fundraising event in London, Olmert announced that he would run for prime minister, and received loud support from the crowd. “The problem with the last election,” he told a sympathetic audience, “was that no one ran against Netanyahu for prime minister.” During a speech he delivered at The Hebrew University last January, he hurled a veiled insult at Netanyahu, claiming that only an “idiot” could fail to understand the important of a peace agreement with the Palestinians.

Olmert’s grand political plans suffered a mortal blow with Shula Zaken’s efforts to wreak vengeance on him. First of all, the Israeli public will not easily throw its support behind the former chairman of Kadima. According to the polls, Israelis neither admire nor appreciate him. But Olmert assumed that if he is acquitted in the Holyland Park case, he would have another chance. In that case, he would use his dramatic acquittal to make an impressive political comeback. All of that changed last week. Even if the state prosecutor declined the belated testimony of an offended Zaken, what she said will continue to reverberate in both public and political spaces, thereby enveloping the former prime minister in a cloud of suspicion regarding the charges of corruption leveled against him. All of this leaves the political center-left without a leader, and brings it back to the state it was in before the last election.