Evidence introduced in the trial of former Prime Minister Ehud Olmert recalls his hurried peace proposal to Palestinian President Mahmoud Abbas in 2008, shedding a new light on the possible motives behind it. 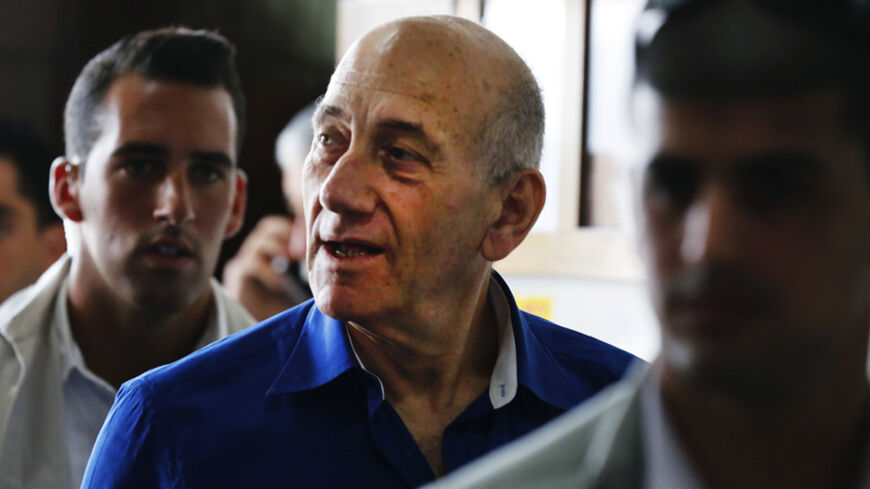 In January 2011, the news media released sections from a memoir written by former Prime Minister Ehud Olmert. The publicized text — the book was never published — dealt with the advanced negotiations Olmert held with Palestinian Authority (PA) President Mahmoud Abbas, in series of secret tête-à-têtes that were held in Olmert’s Jerusalem home.

The year was 2008. Olmert was an unpopular prime minister after the Winograd Commission’s report pointed out his failures in the Second Lebanon War, and the police investigation in the Talansky affair and associated envelopes of money lent him the aura of someone involved in corruption. But behind closed doors, Olmert advanced a peace agreement with the Palestinians in a way that no previous Israeli prime minister had ever done. He was focused, he was adamant and he was determined to go the whole nine yards.

Former US Secretary of State Condoleezza Rice describes in her 2011 memoir "No Higher Honor” how she almost fell off her chair when Olmert talked to her privately in his home about partitioning Jerusalem and sketched a coherent plan for her. She described how surprised she was when he said, “Tzipi Livni is a hard worker, and she has my complete confidence. … The problem is that the process with Abu Alaa [Ahmed Qurei, head of the Palestinian negotiating team] isn't going to get it done on time. Israel needs to get an agreement with the Palestinians before you leave office.” Olmert sent Rice to talk to Abbas, thus starting a covert negotiation behind Livni's back.

Segments of Olmert's book that were published by the Israeli daily Yedioth Ahronoth in 2011 reveal part of his secret conversations with Abbas. Thus, for example, he describes the conversation that took place after the Palestinians asked Israel to release their tax monies that had been frozen: “‘How much money do you need?’ I asked President Mahmoud Abbas. ‘We need 50 million shekels [about $13 million],’ answered the chair of the Palestinian Authority. ‘According to our calculations, you need $100 million and we are willing to send you this sum immediately.’ Silence descended on the room.”

Six years later, Olmert is up to his neck in corruption affairs for which he is expected to serve a prison sentence. And if that wasn’t enough, more information came to light on Nov. 3 in audiotapes of Shula Zaken, Olmert’s personal assistant and bureau chief throughout most of his political career. We are taken behind-the-scenes to the alleged corrupt dealings of the former prime minister.

Like a seasoned criminal, Olmert is heard ostensibly disrupting legal proceedings by asking his former secretary not to testify in court, and allegedly pays her “hush money.”

This moral abyss, this governmental degeneration and criminal level-headedness rising from the throat of a former prime minister reverberate in the air and are hard to digest. But when we look at the big picture and think how that same Olmert led two wars (the Second Lebanon War in 2006 and Operation Cast Lead in the Gaza Strip at the end of 2008), how he held advanced diplomatic negotiations on partitioning the land and Jerusalem — then this saga takes on additional ramifications. Perchance there is room for soul-searching on the part of the media outlets and politicians who supported him then, despite all the evidence to the contrary.

Was Olmert given preferential treatment by some of the media outlets because he was working on a diplomatic arrangement? Is it possible that Olmert believed that a diplomatic arrangement would be his insurance policy against criminal proceedings, and that’s the reason he promoted negotiation with Abbas with all his might? Even more: How did it happen that very high-up officials in the political system tried, on the eve of the 2013 elections, to have Olmert run for premiership on behalf of the center-left?

Did Olmert, who was waging a quiet campaign all this time for a return to politics, do this partly so that the justice system would be reluctant to touch a candidate for the premiership? The politicians who made pilgrimages to him in those days have to examine their consciences.

Now that the tapes are before us, it is hard to deny the connecting link between Olmert’s conversations with Abbas and his conversations with Zaken. Olmert conducted the most sensitive and charged national issues like a merchant. Although he had lame-duck status and could have been expelled from the prime minister’s chambers at any moment, Olmert continued to secretly negotiate on partitioning the land in secret talks with Abbas.

Olmert wrote the following about their last meeting, when he outlined the borders of the agreement on a napkin:

“I started off by presenting the principles of the proposed arrangement. After I finished, President Mahmoud Abbas took a deep sigh and asked to see the map that I prepared. Never had an Israeli prime minister presented such a detailed, coherent position for resolution of the conflict, as was introduced on that day. … Abbas said that he couldn’t decide immediately and that he needed time. I told him that he was making a mistake, a historic mistake. ‘Take the pen and sign right now. You will never receive a fairer or more equitable offer again. Don’t hesitate.’”

The shocked Abbas answered, as Olmert writes, “‘Give me a few days. I am not familiar with maps. I propose that tomorrow, we meet with two experts. If they’ll tell me that everything is OK, we can sign.’ Since then I haven’t seen Abbas, the map remained with me.”

For years, Olmert would describe that moment in interviews as a historic mistake and lost opportunity, and he placed the blame on Abbas. Later on, the PA chairman explained that he understood that as Olmert was nearing the end of his political and public life, it was not right to reach an agreement with him.

Olmert’s criminal imbroglio, and especially what emerges from Zaken’s tapes, proves that Abbas was probably right. Olmert did not have the public and moral prominence of a leader who could direct his nation to an agreement, an agreement that had great potential for creating severe internal conflicts in Israel. It is hard to shake ourselves free of the shock of hearing Olmert’s quiet, confident voice devising dark deals with Zaken. Our misgivings only increase when we recall how he also conducted the most sensitive matters pertaining to the security of the state and its future in such an uninhibited fashion.

Olmert’s associates will argue that, as time went on, the Second Lebanon War emerged as having been successful, since the northern border has remained quiet since then. They will say that we should praise him for the courage and fortitude to attack the reactor in Syria in 2007. On the other hand, his detractors will argue that all his actions are tainted with the suspicion that he did what he did to deflect public opinion away from the corruption affairs. And indeed, today we cannot free ourselves from the feeling that much like a seasoned criminal, Olmert tried to push Abbas to the wall to save his own skin out of fear of the law.