The Israel Police under the leadership of Chief Roni Alsheich seems to be losing its guiding principles, instead protecting police officers from citizens rather than protecting the citizens and the values of democracy. 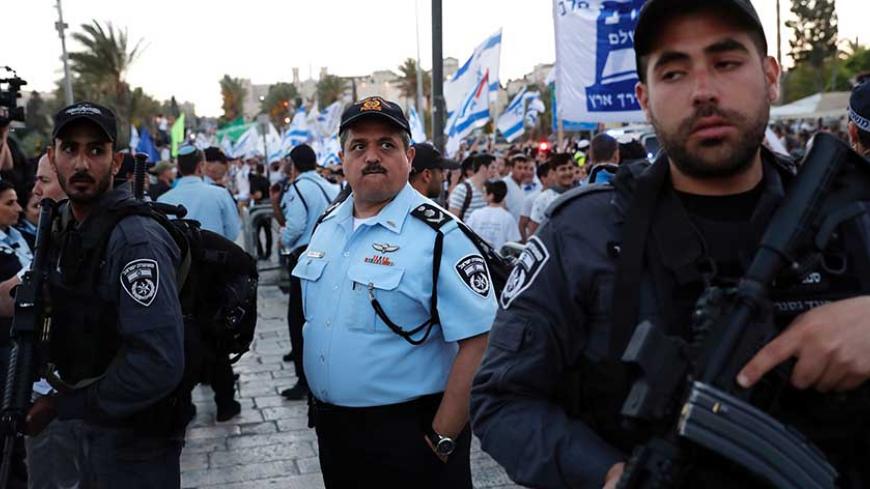 Chief of the Israeli police force, Roni Alsheich (C), is seen during the Jerusalem Day march in Jerusalem, May 24, 2017. - THOMAS COEX/AFP/Getty Images

"We are here to serve. Our role is to serve the normal, law-abiding citizens and to provide them with the best possible personal security while waging a determined and uncompromising war against those people who choose to define themselves as criminals." That was just one moving statement made by Israel's Commissioner of Police Roni Alsheich when he was sworn in to his new position in December 2015.

Ostensibly, Alsheich's comments expressed a deep understanding of the role police play in a democratic society. Yet since then, Alsheich has actually proved that he has a very worrisome lack of understanding concerning the sanctity of human rights within a democracy. It seems as if Alsheich, who rose through the ranks of the Shin Bet, climbing as far as deputy director of that clandestine organization, has not fully internalized his role in a civil society and continues to act as if he is still operating in the shadow world.

On June 21, Alsheich provided two disturbing headlines regarding his approach to civil rights in Israel.

The first headline told how the police commissioner appointed a committee to assess granting legal aid to police officers who want to sue civilians. It turns out that Alsheich is very disturbed by several instances of concerned citizens' public shaming of policemen on the internet and is working to put an end to the phenomenon, not only through criminal prosecution, but also by allowing police officers to file civil suits against civilians, with legal aid provided to them by the Israel Police itself. The committee was also tasked with determining whether to create a police defenders' office to assist police officers who are being sued.

According to reports, Alsheich reached his decision after several instances in which police officers claimed that civilians posted offensive materials online regarding their operational activities. The best known case involves attorney Barak Cohen, who posted an online video clip denigrating the police coordinator of intelligence in 2014 and was later convicted of harassing a public figure.

The person who gave his seal of approval to this move was none other than State Attorney General Avichai Mandelblit. He approved the police commissioner's decision to establish the committee, which is to be headed by a retired justice.

The decision to establish this committee shows a gross misunderstanding of the importance of defending those very civil rights that the police commissioner is sworn to uphold and protect. The law as it now stands already allows the police to launch legal proceedings against anyone who posts offensive materials about police officers if those posts are related to the police officers acting to fulfill their duties. In fact, that is what happened in the case of Cohen. As such, it is not at all clear why Alsheich needs additional tools to enforce this. It seems as if his move was intended to discourage civilians from using legitimate tools, such as posting about police misconduct online.

Social networks provide the average civilian with an important tool to protect his or her rights by such means as distributing documentation of police misconduct. But it seems as if Alsheich cannot break free of the culture of the Shin Bet and has no sympathy whatsoever for civilians. His main interest is to protect his police force, even at the cost of limiting the rights of citizens to expose such misconduct.

The second headline came from Alsheich's speech to the Herzliya Conference, in which he announced that he was working to create a youth movement within the police force, intended to teach compliance with the law. It is too bad that Alsheich didn't use the opportunity to announce a series of workshops given by the police in schools, which could then be used to teach students basic concepts pertaining to their civil rights in a democratic society, such as the lofty right to demonstrate. It seems as if Alsheich doesn't fully understand the importance of demonstrating.

In May, the police commissioner instituted a ban on demonstrations outside the homes of public figures. As such, demonstrations held every Saturday night outside the Petah Tikva home of Mandelblit for "dragging his feet on the Netanyahu case," are now being held under restrictions. There is an increased police presence to enforce the new rules, and there have already been cases in which demonstrators were subjected to violent reactions by the police.

But Alsheich is not the only problem. There is also the decision by State Attorney Shai Nitzan, approved by Mandelblit, to launch a police investigation into former Prime Minister Ehud Olmert, who is now serving time in prison. Olmert is now being charged with smuggling classified materials out of prison so that he could write his book. The very charge is scandalous.

In this incident, the most basic civil rights were trampled without anyone batting an eyelash. The police raid on the Yedioth Ahronoth publishing house, which is slated to publish Olmert's book, and the confiscation of computers and the manuscript (as well as other manuscripts there) are further evidence that the system itself has gone mad. Before he can even publish his book, Olmert is required by law to submit the manuscript to the State Censor and a special ministerial committee for approval. In other words, even if he used classified materials, these could be disallowed and removed before the book is even published.

Instead, Olmert has recently been portrayed as a traitor, an accusation that will certainly not help his request for an early release from prison for good behavior. Olmert had good reason to feel persecuted over the past few days. The chest pains that saw him taken to the hospital this week seem to be connected to all this as well.

At the beginning of this week's Cabinet meeting, Minister of National Infrastructure, Energy and Water Resources Yuval Steinitz, normally considered one of Olmert's sharpest political adversaries, gave voice to the inescapable feeling that someone is abusing his power. "I hope that the parole board decides to release Olmert," he said. "I cannot understand this dance to demonize him that we have seen over the past few days. He paid his debt to society. I fail to understand this current trend to depict him as a security threat."

There is a direct connection between the police commissioner's problematic initiatives, such as the persecution of demonstrators and efforts to threaten those using social networks to expose police misconduct and the way in which Olmert and his autobiography are being treated. Even if Olmert was wrong, this does not justify the trampling of civil rights and a raid on a publishing house. Scenes like that must never occur here. Police should not have to raid a publishing house and confiscate manuscripts.

The recent series of events shows that the gatekeepers of Israeli democracy — the commissioner of police, the state attorney and the attorney general — are abusing their power to launch an unwarranted and undeterred attack on basic civil rights, such as freedom of expression and the right to demonstrate. And there is no one to raise a red flag and stop this shipwreck from occurring.