Iran’s supreme leader attacks US for support of Saudi Arabia 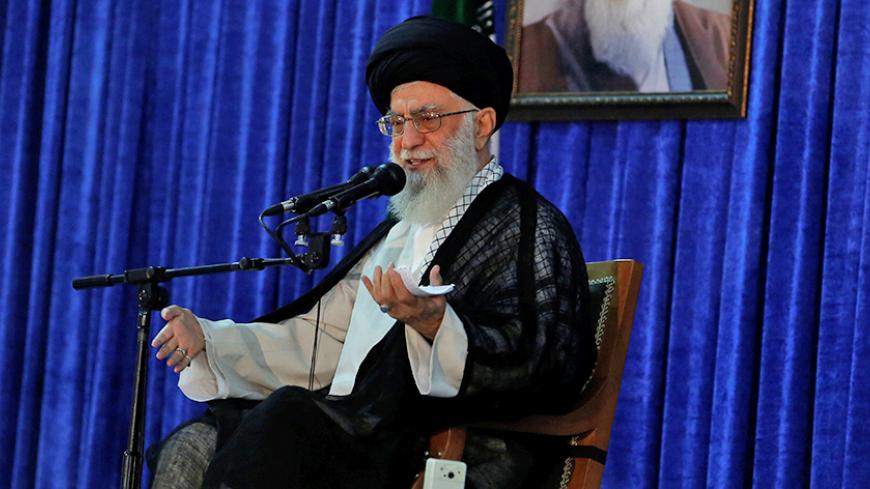 Iranian Supreme Leader Ayatollah Ali Khamenei delivers a speech during a ceremony marking the death of the founder of the Islamic Republic, Ayatollah Ruhollah Khomeini, in Tehran, Iran, June 4, 2017. - TIMA via REUTERS

Iranian Supreme Leader Ayatollah Ali Khamenei delivered one of his harshest criticisms of the new US shift in adopting Saudi Arabia’s anti-Iranian stance.

In a speech commemorating the death of the founder of the Islamic Republic of Iran, Ayatollah Ruhollah Khomeini, Khamenei said that a number of enemy countries emerged immediately in the first decade following Iran's Islamic Revolution in 1979 and have remained enemies until today. He urged Iranian officials to not ignore the principle of separating from the “coil of American power.” Khamenei added, “Our enemies are not idle. Until today, they have not been able to knock us back, but the enemy is lurking.”

On US President Donald Trump’s adoption of Saudi Arabia’s positions with respect to Iran and criticism by US officials of Iran’s presidential election during a recent Saudi trip, Khamenei said, “The president of America stands next to a tribal leader and does a sword dance and then criticizes the vote of 40 million people in our election.”

In an indirect attack on President Hassan Rouhani, who had advocated larger negotiations to remove all sanctions on Iran, which would likely require direct US-Iran talks on non-nuclear issues, Khamenei said, “Some know it to be reasonable — and they make a mistake — and say that challenging [the United States] has a price.” He added, “However, compromise also has a price. Consider that the Saudi government — to compromise with the new American president — is required to give more than half of its budget at the service of Americans.” During Trump’s trip to Saudi Arabia, the two sides agreed to a $110 billion arms deal.

Khamenei continued, “If challenging [the United States] is reasonable and in accordance with logic, its cost is lower than compromise.” Despite the moderate candidate’s re-election, Khamenei remained steadfast in his opposition to broader talks with the United States. “When you retreat, then they present new demands until you give in to their demands and the cycle continues,” he said. “Being a revolutionary means to not make your goal to please the enemy. Their goal should be to rely on the people and domestic forces and not submit to any power.”

Khamenei also acknowledged the issue of election violations, which conservative candidate Ebrahim Raisi complained about directly to the Guardian Council. Khamenei noted that while the violations did not change the outcome of the election, this should be prevented from happening again during the next election. He asked the candidates to put the partisan hostility and accusations behind themselves now that the election is over.

Khamenei also asked the electorate — whether their candidate won or lost — to compose themselves. Recalling the 2009 election in which the Green Movement leaders called the election fraudulent and brought out street protests, Khamenei said, “We saw what problems 2009 brought for the country.”