Khamenei: Israel will no longer exist in 25 years

Iran's supreme leader, Ayatollah Ali Khamenei, said that talks with the United States will be limited to the nuclear issue and predicts that Israel won't survive for another 25 years. 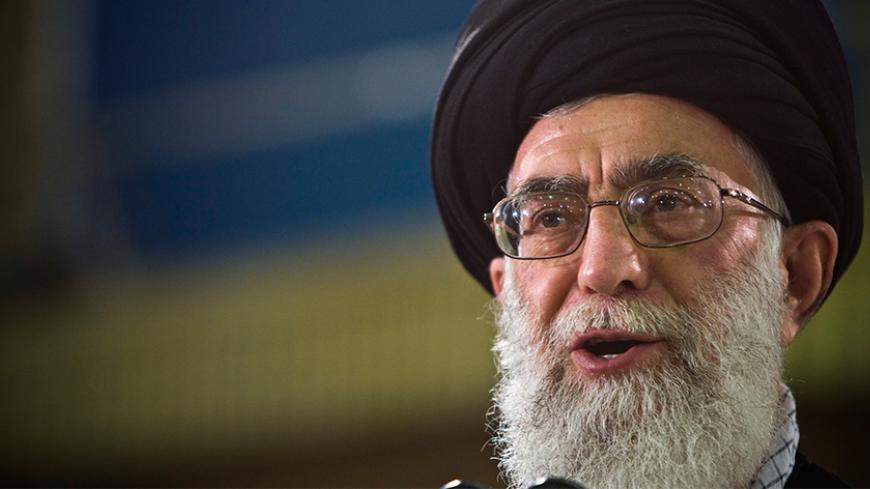 In a Sept. 9 speech, Iranian Supreme Leader Ayatollah Ali Khamenei warned about US intentions toward Iran and said that there will be no negotiations with the United States outside of the nuclear deal reached in July.

In one of his strongest anti-US speeches, Khamenei spoke about US support for the government of Shah Mohammad Reza Pahlavi, who was overthrown in the 1979 revolution, asserting, “All of the pillars of the monarchy, from the administration to the shah himself, were dependent on America. And all of the American officials, through their puppets, used to rule like Pharaoh over the oppressed people of Iran. But Imam [Ruhollah Khomeini], like the Moses of his time, with the backing of the people, dismantled this arrangement in this ancient land.”

According to Khamenei, putting an end to US “illegitimate interests” in Iran is the primary reason for the United States' “endless enmity” toward Iran. On Ayatollah Khomeini calling the United States the “Great Satan,” Khamenei said, “The head of all the satans is the devil. But the work of the devil is only seduction and deception, whereas America seduces and also kills, sanctions, deceives and [is hypocritical].”

Of those in Iran who advocate better relations with the United States, Khamenei asked, even if “religion and being a revolutionary is put aside, what happens to loyalty, to the interests of the country and reason? What reason and conscience permits us to put makeup on crimes such as America’s and paint it as a friend and trustworthy?”

Khamenei added, “A devil who was kicked out by the people through the door is determined to return through the window, and we must not permit this.” As an example of US hostility, Khamenei commented, “The days after the nuclear agreement, a fate which is still not clear in Iran and America, Americans in Congress were busy with designs and plans to create problems for Iran.”

The way to resist the United States, according to Khamenei, is “to become strong in a way that the Great Satan becomes disappointed in the effectiveness of its enmity.” He said, “America, in a way, has divided its duties with Iran and behaves in a twofold way; some smile while others are busy producing legislation against Iran.”

During the nuclear negotiations, Iranian and American officials had occasion to hold bilateral meetings, which Khamenei viewed as an excuse for the United States to try to gain influence in Iran. Khamenei stated, “We only gave permission to negotiate on the nuclear issue, for clear and stated reasons, [and] the negotiators emerged well from this arena, and in other fields we will not negotiate with the Americans.”

Given that the nuclear negotiations brought US-Iranian cooperation to a peak over the last 36 years, some believe Tehran and Washington could cooperate on regional issues as well. When a reporter asked President Hassan Rouhani Sept. 8 whether Iran would work with the United States and Saudi Arabia to address the civil war in Syria, he said yes. Rouhani, along with other influential figures in Iran, among them Ayatollah Ali Akbar Hashemi Rafsanjani, believe that improving relations with the United States is to Iran’s benefit. The supreme leader, along with the Islamic Revolutionary Guard Corps and other security and military bodies, however, are worried that more cooperation will increase US influence in domestic Iranian politics.

While tensions with the United States have decreased slightly as a result of the nuclear deal, animosity toward Israel remains unchanged. Khamenei said, “Some Zionists have said that due to the outcome of the nuclear negotiations, we have been relieved from worry about Iran for [the next] 25 years. But we say to them, you will essentially not see [what will happen in] the next 25 years, and with the grace of God, something by the name of the Zionist regime will no longer exist in the region."