Khamenei claims US is anti-Iran and anti-Shiite

Iran’s Supreme Leader Ayatollah Ali Khamenei has delivered one of his most anti-American speeches in years. 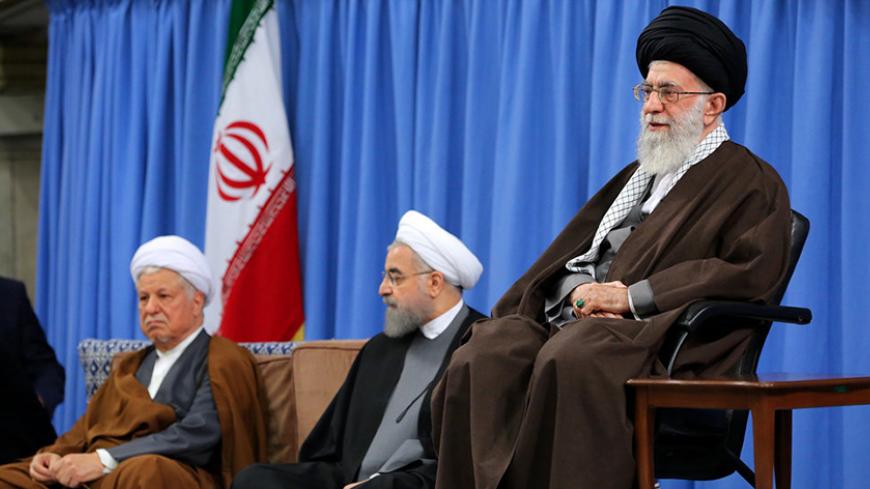 Iran's Supreme Leader Ayatollah Ali Khamenei gives a speech on the occasion of Eid of Mab'ath, or Ascension, in Tehran, May 5, 2016. - Mehr News Agency

Four months after the comprehensive nuclear deal between Iran and the six world powers — which was largely the result of bilateral Iranian and American negotiations — Iranian and American officials are still debating misunderstandings over the deal and are becoming entangled in new disagreements.

In the latest attack, Iran’s Supreme Leader Ayatollah Ali Khamenei — who has always distrusted the United States while simultaneously giving the green light for the nuclear negotiations — accused the United States of being anti-Shiite, the predominant sect to which the majority of Iranians belong. “Today, anti-Islam, anti-Iran and anti-Shiism are the definitive policies of America and the governments who are affiliated with it,” said Khamenei during a May 5 speech to administration officials, the heads of branches of the government and ambassadors from Islamic countries on the occasion of the anniversary of the day Muslims believe Prophet Muhammad received his first revelation.

Khamenei criticized the United States, which he referred to with the religiously charged terms of “ignorance and idolatrous,” for having dropped atomic bombs on Hiroshima, killing hundreds of thousands but after many years “still not ready to apologize.” He also blamed the United States for destroying the infrastructure of countries such as Afghanistan and Iraq and not being willing to accept responsibility for what they have done.

According to Khamenei, “reactionary Islam” — the violent jihadi movements taking over parts of the Middle East — and “American Islam” — a softer and more liberal type of Islam promoted by Western countries — are two movements with the same goals.

Khamenei also repeated an old claim that terrorists groups in the Middle East are supported by the United States, saying, “Corrupt groups who committed the worst crimes in the name of Islam are supported and backed by the West.” He continued, “In appearance the West forms an anti-Islamic State coalition, but in reality they support this group and within the anti-Islam framework refer to them as the ‘Islamic State’ and ruin the image of Islam.” Many Muslims have objected to calling the terrorist group by their chosen name and refer to them instead with the Arabic acronym “Daesh.”

Iran’s President Hassan Rouhani also addressed the crowd at the event, echoing many of Khamenei’s criticisms of the United States. Rouhani said that anti-Islam Westerners and their mercenaries in the region are “the two blades of a scissor.” While he did not blame the United States or the West for supporting terrorist groups in the region, he did criticize the US occupation of Afghanistan and invasion of Iraq, and the chaos those military campaigns created, saying, “The responsibility for all of these crimes is [on] the Zionists and the Americans.”

Rouhani’s criticism of the United States is perhaps his strongest since taking office in 2013. He came into office promising better relations with Western countries, and his decision to assign Foreign Minister Mohammad Javad Zarif — who studied in the United States and speaks fluent English — to conduct negotiations with US Secretary of State John Kerry broke a major taboo in Iranian politics.

However, since the January nuclear deal implementation, US-Iran relations have shown no signs of improving. Immediately after the implementation, the United States announced new sanctions on Iran’s missile program, which Iran was insistent on not being part of the nuclear deal. A US court has ruled that $2 billion in Iranian assets in the United States must go to victims of a terrorism bombing in Beirut. And an April resolution by a US member of congress condemning Iran’s naval drills in the Persian Gulf caused an uproar in Iran.

Most worryingly for the prospect of better US-Iran relations, remaining US sanctions continue to pose problems for Europeans and Asians seeking to do business with Iran. US officials have suggested that rather than US sanctions, Iran’s own behavior has caused investors to keep a distance, an argument that Khamenei himself has rejected.