Khamenei warns of subtle US influence on elections

Iran's Supreme Leader Ayatollah Ali Khamenei has said in a speech that while the United States has been quiet on the Iranian elections, Iranians must be wary of attempts to polarize their society. 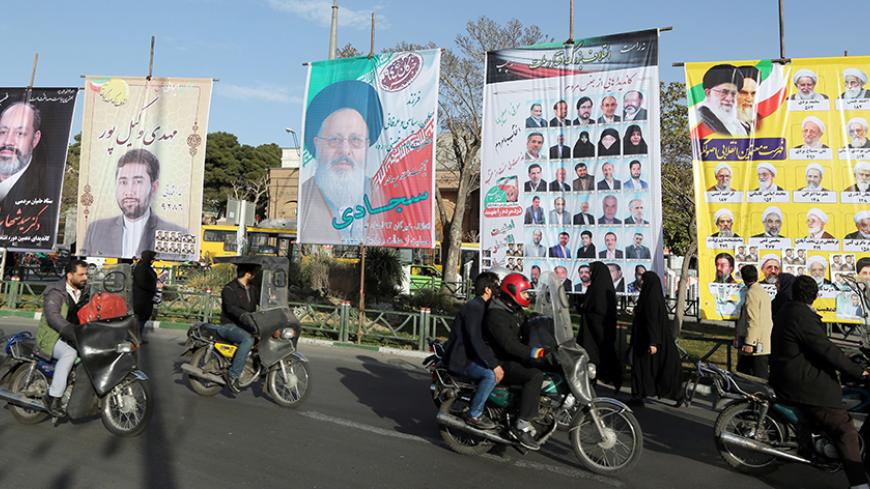 During a Feb. 24 speech in the city of Najafabad, Iran’s Supreme Leader Ayatollah Ali Khamenei commented on the behavior of the United States ahead of the Feb. 26 elections for Iran's parliament and Assembly of Experts. He also warned about divisions and a polarization between hard-liners and moderates.

Khamenei said that in the last 37 years, since the 1979 revolution, Iran’s enemies, including US officials, have attempted to dissuade Iranians from voting by describing the election process in the country as being useless. Khamenei now believes, however, that the United States has learned from experience that taking a direct position against Iran’s elections has had the opposite of the desired effect, prompting Iranians to show up and vote.

“Based on this,” Khamenei said, “the Americans have been silent in these elections.” His comments made an interesting contrast to his Feb. 17 speech, in which he said that “British radio is giving the people of Tehran instructions to vote" for specific individuals.

Khamenei did not let the United States off the hook entirely, saying that despite the silence of US officials on Iran’s elections, “their agents are busy implementing new ploys in various ways.” One such ploy, he said, would be to create a “false polarization” of hard-liners and moderates in Iranian society during the elections.

Khamenei said that it is natural that in any elections, one side would lead over the other, but that this competition “does not mean the polarization of the nation and creating a divided society and enmity and malice between people.” He declared, “Encouraging this polarization in Iran is false.”

Khamenei added, “The source of this false polarization is outside of the country but, unfortunately, sometimes this is repeated inside the country.”

Khamenei said the people of Iran want a parliament that is religious, committed and brave. Ideally, the parliament will be hard to deceive and will be resistant to the greed of "arrogant" powers. It will defend the nation’s dignity and independence, genuinely desire progress and believe in the scientific movement of the youth and in an indigenous economy. It should be aware of the people’s problems and be determined to solve them.

Khamenei also called some observers' dismissal of US “infiltration” into Iran “unwarranted and unjustified.” He warned that sometimes an individual may be an agent of infiltration and repeat the statements of the enemy without realizing they are in the service of the enemy.

One such instance of repeating the statements of enemy countries and “adopting the enemy’s political discourse,” according to Khamenei, is rhetoric that divides Iranian camps into hard-liners and moderates. He said the implication of doing so is that hard-liners are people who are bound to the Islamic Revolution and the principles of the founder of the Islamic Republic of Iran, Ayatollah Ruhollah Khomeini, and moderates are people who will surrender and compromise with foreigners.

Khamenei also said that the results of the elections, whatever they are, will impact the people, so every effort should be made to ensure that the elections are conducted correctly.