President Hassan Rouhani’s appearance before parliament to answer economic questions did not satisfy Principlists or Reformists. It did, however, please Supreme Leader Ayatollah Ali Khamenei. 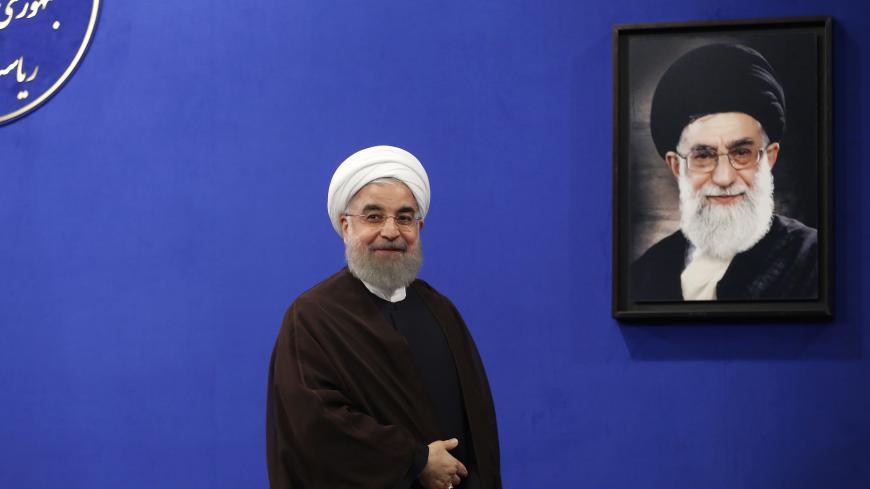 Iranian President Hassan Rouhani appeared before parliament on Aug. 28 to answer a series of questions posed by lawmakers about his administration’s performance. The summons — a first for Rouhani — left members of parliament unconvinced by Rouhani's answers about failed policies.

Lawmakers initially tabled the motion to question Rouhani on Aug. 1, thus giving him, according to the constitution, one month to appear before parliament and answer their questions. Rouhani responded to the summons on Aug. 5 in a letter addressed to parliamentary speaker Ali Larijani. In the letter, Rouhani said the summons neither kept with the constitution nor did it come at a suitable time.

In an interview broadcast on state television the same day, Rouhani appeared to warn members of parliament that he would divulge inconvenient secrets if grilled in parliament, saying, “It is difficult for me to discuss some topics during interviews or in a speech. However, if a parliamentarian asks me about it, I can be more explicit and retell some realities to the beloved people.”

With Rouhani warning members of parliament, and particularly the hard-liners, that he would reveal secrets, everyone was waiting to see what he would say in parliament. Finally, on Aug. 28, the president attended a special session of parliament to address the parliamentarians' questions, which were generally related to his economic policies. However, once at the podium, Rouhani practically repeated the same things he has always said while defending his administration’s attempts to overcome problems and propose solutions. Nothing new or untold could be found in his remarks. Afterward, parliament held a vote to determine their satisfaction with Rouhani's answers to their questions. Members of parliament voted that Rouhani answered only one out of five questions in a satisfactory way.

During the session, Rouhani was questioned on five topics: smuggling, unemployment, slow economic growth, devaluation of the national currency and sanctions against Iranian banks. However, except for the banking sanctions, Rouhani failed to convince the members of parliament about his administration’s policies.

As soon as the session ended, reports emerged about last-minute negotiations between the president and different political groups. According to a Reformist newspaper in Tehran, deputy speaker of parliament, Ali Motahari, had met with Rouhani prior to the session and warned him of the Reformist faction’s decision. “The ‘Hope’ faction has decided that if the president is not clear and explicit about the challenges being faced and the hands behind the current status quo, it will not vote in his favor,” said Motahari. Rouhani’s response to this was that it did not matter to him if they voted or not.

Meanwhile, Tehran newspapers took a similar angle regarding Rouhani’s remarks in parliament. The morning of Aug. 29, both Reformist and Principlist outlets printed stories showing their dissatisfaction with Rouhani’s words. Resalat and Javan newspapers, which are close to the hard-line movement, and Shargh daily, which represents the Reformists, exemplified this. All three outlets covered Rouhani’s speech under the headline “Not Convinced.” Other Reformist papers such as Etemaad and Ebtekar also expressed their discontent with Rouhani’s lack of transparency, using headlines like “Rouhani did not talk” and “Hassan said nothing.”

However, one key individual was convinced and pleased with Rouhani’s performance in parliament: Supreme Leader Ayatollah Ali Khamenei. In a meeting with Rouhani and his Cabinet on Aug. 29, Khamenei said, “Yesterday’s parliamentary session was a representation of the Islamic Republic of Iran’s authority and stability. God bless Mr. President and the legislative branch, who together displayed this authority.” Khamenei also thanked the members of parliament as well as Rouhani, saying, “Lawmakers question a president who was elected with over 23 million votes and he provides them answers calmly. This is a sign of religious democracy. … This session strengthened both the administration and parliament.”

Yet the Reformists were unhappy that Rouhani did not reveal any secrets. They had expected the president to begin speaking about hidden hands behind the stage, but Rouhani did not do this, thus prompting frustration among the Reformists. The hard-liners who probably would have been the subject of Rouhani’s secrets were also unhappy, since they enjoy seeing their rival weakened, viewing this as a sign of their own success.

What was different this time around was Khamenei’s support of Rouhani and parliament. His backing reflects how different Khamenei's view of politics is from Iran’s Reformists or Principlists. Khamenei has demonstrated in the past that the establishment's reputation is very important to him and that he was not happy with former President Mahmoud Ahmadinejad revealing secrets during the disputed 2009 presidential election. Therefore, he was now content that Rouhani’s questioning had proceeded calmly, without excitement or accusations. In his meeting with Cabinet members, Khamenei said, “Differences of opinion between officials are natural, but these differences should not be publicized, as this would only make the nation more unhappy.”

Khamenei’s satisfaction with Rouhani’s handling of the parliamentary session was so great that he even praised the government’s performance. “In the past year, suitable measures have been taken regarding economic growth, energy, increasing non-oil exports and reducing imports," he said. "These services should be conveyed to the people in a creative manner.”

For Khamenei, maintaining dignity and staying away from controversy is a priority, regardless of who heads the administration. As such, with the argument that the “enemy” is carefully monitoring these issues in order to take advantage of Iran, Khamenei has tried to resolve differences between domestic players without debate.