Ahead of Iran’s hotly disputed parliamentary and Assembly of Experts elections, hard-liners are seemingly making efforts to lower voter turnout. 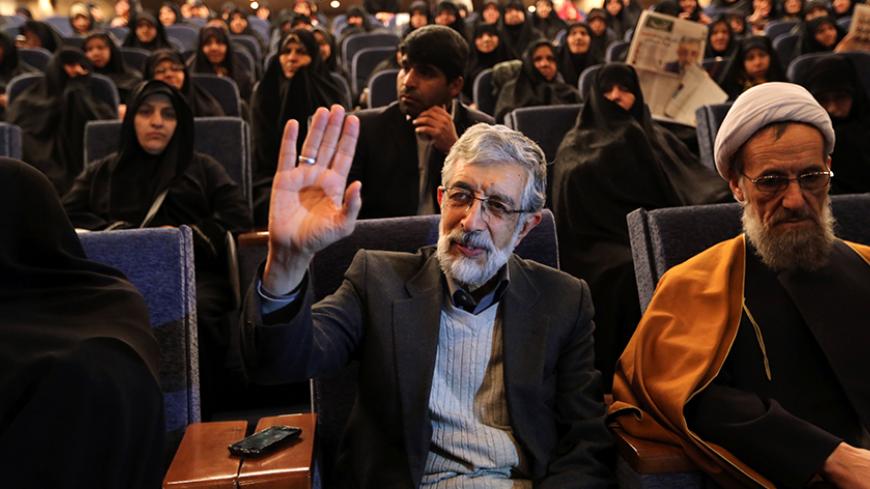 TEHRAN, Iran — Opinion polls show Reformists and moderates have the upper hand ahead of Iran’s key upcoming parliament and Assembly of Experts elections. This has caused serious apprehension among hard-liners about a possible landslide victory for supporters of President Hassan Rouhani. To avoid such an outcome, hard-liners have brought into play a scheme that few could have imagined: getting people to abstain from taking part in the elections and making them doubt the results.

In a speech that signals the anxiety of the hard-liners, Gholam Ali Haddad-Adel, head of the main Principlist ticket for the parliamentary elections, said, “During the previous elections, [foreign] satellite TV channels [opposed to the Islamic Republic] used to constantly urge people not to participate in the elections; however, now they are instructing people to cast their votes and have even introduced their preferred candidates.” Moreover, Mehdi Chamran, the conservative chairman of Tehran City Council, said, “Instead of boycotting the elections, the enemies are telling people which candidates they [should] cast their votes for and whom to leave out."

In this vein, the Iranian state broadcaster, which is controlled by hard-liners, has made an unexpected move. It usually always urges people to participate in polls and depicts society as fully willing to cast ballots in the Islamic Republic’s election — even though there is always a minor portion that prefers not to take part in elections. However, Iranian state TV now has begun airing interviews with people who say they don’t want to vote for anyone because their votes won’t count.

What the hard-liners are doing is in full contradiction with what Supreme Leader Ayatollah Ali Khamenei has urged Iranians to do in the elections. Indeed, on Jan. 4, Ayatollah Khamenei, in a meeting with Friday prayer leaders, said, “It is very important that the turnout in the election should be high; the extensive presence of people in the elections makes the country stronger.”

In furtherance of their objective, hard-liners have also been quick to spread the unfounded rumor that the day after the Feb. 26 elections is a holiday, in order to get people to plan outings. Of note, Saturday is the beginning of the workweek in Iran.

These measures have raised alarm as many Reformists and moderates depend on a high voter turnout in order to achieve success in the polls.

Mohammad Javad Haghshenas, a Reformist political analyst who was disqualified as a candidate for the parliamentary elections by the Guardian Council, told Al-Monitor, “Unfortunately, hard-liners don’t want to witness Reformists and moderates winning the election, and state TV — an important tool of the hard-liners — is completely active on [abetting] this.” Haghshenas added, “It has taken us by surprise that a popular news program on Iranian state TV promotes an unexciting and uncompetitive election atmosphere.”

Reformists and moderates alike are now using every human resource and credit they have to counter the hard-line push to keep voters at home.

For instance, famous Iranian actors and actresses such as Parviz Parastui, Reza Kianan, Niki Karimi and Taraneh Alidoosti have shared the joint Reformist-moderate ticket for the Assembly of Experts and parliamentary elections on their Instagram pages and are urging people to cast their ballots. Parviz Parastui writes on his Instagram page, “We should participate in the elections so that the deserved candidates find their way to the parliament.” Amir Jafari, another popular actor, said, “I will vote for the ‘Hope’ ticket so that no one dares anymore to chant ‘Death to [former Reformist President Mohammad] Khatami in the parliament.”

Subsequently, Khatami released a short video. Since the judiciary has banned Iranian news outlets from publishing Khatami-related reports and stories, the former Reformist president’s video clip appeared on social media platforms such as Telegram and YouTube. “I emphasize that people [should] vote for all of the candidates present on both lists [in the parliamentary and Assembly of Experts elections],” said Khatami, who enjoys high popularity.

Ayatollah Ali Akbar Hashemi Rafsanjani, and also Hassan Khomeini — who was disqualified by the Guardian Council from running in the Assembly of Experts election — have separately released statements and clips in which they urge people to participate in the elections. Moreover, even some groups such as the Freedom Movement of Iran, which is banned by the authorities, have called on voters to cast their ballots. In addition, a popular campaign has been created by people under the name of “2 Million Votes” for the Assembly of Experts elections, which urges people to vote.

Haghshenas, the Reformist political analyst, told Al-Monitor, “Hard-liners are really scared of the [prospect of the] Reformists' and moderates’ success in the upcoming elections. They are completely aware that a high turnout in the election will mean a complete defeat for them; this is why they are resorting to every tool they have to prevent people from participating in the elections.”