How some Iranians are mobilizing to get voters off the couch

Amid hot contests with Principlist rivals and mass disqualifications of candidates, Iranian Reformists face a boycott campaign and voter apathy ahead of key polls. 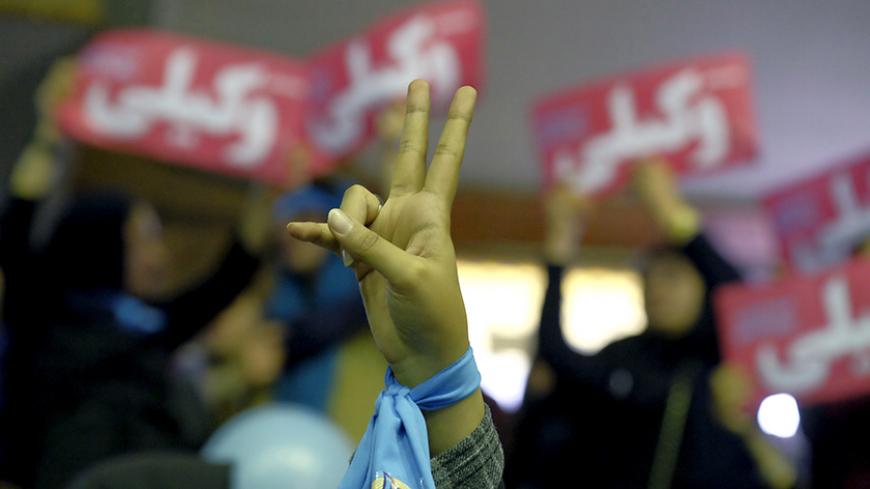 An Iranian woman gestures as she attends a Reformist campaign rally for the upcoming parliamentary election, in Tehran, Feb. 18, 2016. - REUTERS/Raheb Homavandi

TEHRAN, Iran — For years, a boycott has been proposed by opposition groups on the eve of every election in Iran. The idea is neither new nor necessarily related to the disputed 2009 presidential election and its aftermath. Rather, it goes back to the 1997 presidential election, which resulted in the coming to power of Reformist Mohammad Khatami.

Around that time, certain groups believed that the election's results were predetermined and that conservative candidate Ali Akbar Nategh-Nouri would, without a doubt, become the next president of Iran. As a result, some opposition groups boycotted the elections and advocated not showing up at the polling booths at all. The number of Iranians who endorsed this strategy, however, was evidently not large. Indeed, polls later showed that some 80% of eligible voters did in fact vote. Nevertheless, as time went by, the idea of boycotting elections as a political statement gained more support, and with the expansion of mass and social media, boycott proponents became better able to present their point of view to the public.

For instance, boycotts weighed heavy on the 2004 parliamentary elections and also the 2005 presidential vote, which ushered Mahmoud Ahmadinejad to power. However, support for a boycott reached its peak after the disputed 2009 presidential elections. After Ahmadinejad was declared the winner, a large portion of Iranian society decided to boycott the subsequent election: the 2012 parliamentary polls. Indeed, according to the Ministry of Interior, only 48% of eligible voters showed up to cast their ballots. Voices in favor of a boycott were also active at the time of the 2013 presidential elections, and for the first time, a serious discussion on the idea emerged between pro- and anti-boycott groups. The Principlists were not part of this discussion, while the Reformists tried to gain the support of “silent voters” by encouraging them to vote. The Reformists’ actions bore fruit as moderate President Hassan Rouhani succeeded Ahmadinejad.

Although Rouhani’s election suggested success for the Reformists, the idea of boycotting has once again come to life on the eve of Iran’s parliamentary elections. It is not, however, as strong as the rival “I will vote” campaign. Indeed, a lot of young supporters of the Reform movement have changed their profile pictures on social media such as Facebook, Instagram and Telegram to an image that reads, “I will vote.” These young proponents of voter participation are doing their utmost to convince others to participate as well.

Apart from dealing with the challenge of voter mobilization, the Reformists face the task of coming up with a general ticket. After a lot of back and forth, they have been successful in creating a joint “List of Hope” for both the parliamentary and the Assembly of Experts elections on Feb. 26. Moreover, although conditions have been far from ideal, given the mass disqualification of candidates by the Guardian Council, the Reformists have been able to put forward hopefuls in almost 90% of the electoral districts in the country.

Additionally, considering their experience with the outcome of past boycotts — namely the empowerment of Principlists — the Reformists have sought to adopt a different approach. Some radicals among their ranks who served in previous parliaments are no longer part of the Reformist movement or seen their views become more moderate. The resulting greater potential for pragmatism has allowed the inclusion of moderates and even some Principlist figures on the Reformist ticket — although not without internal and external criticism. Among the Principlists on the Reformist ticket are prominent faces such as incumbent parliament member Kazem Jalali, who has very close ties with parliament Speaker Ali Larijani, and also parliament member Behrouz Nemati.

Al-Monitor spoke to prominent economic and political analyst Saeed Laylaz about the criticism of the inclusion of Principlists on the Reformist ticket. He told Al-Monitor, “People who criticize [Reformists] for our list should see if they can come up with a better plan themselves. So many of our members were disqualified, and we were forced to complete our list with the available options. Also, our main goal is to prevent the radicals from gaining entry to the next parliament.”

Laylaz added, “Of course, there are two other advantages to this list as well. It forced us to go to the next generation of Reformists, and the very presence of these figures shows that the meaning of reform is expanding. While we are moving toward moderation and becoming more inclusive, the other side is making their ‘us-and-them’ categories more and more strict.”

Beyond the challenge of defeating the boycott campaign and expanding their platform, Reformist groups face generally low turnout in the parliamentary and Assembly of Experts elections, compared to the presidential ones. To address this issue, candidates are now being promoted not only by posters and other forms of physical advertisement, but also through social media platforms such as Facebook and Telegram, which have grown to become key advertisement conduits.

Last but certainly not least, Rouhani himself has strongly come out in favor of voter participation in the upcoming polls, as can be seen in most of his speeches during the past few months. Rouhani, who reacted very strongly to the Guardian Council’s initial mass disqualification of primarily Reformist candidates, eventually managed to overturn some of the disqualifications and helped bring such candidates back to the election race.

Only time can tell whether the Reformists will be able to overcome their main obstacles: voter apathy and the boycott campaign. Until then, two things need to be borne in mind about Iranian voters. Polls and analyses often fail to predict the outcome of Iranian elections, and most of all, election fever in Iran tends to appear quite late in the game.