Pro-Rouhani candidates scoop up most seats in runoff

The second round of Iran’s parliamentary elections gave most remaining seats to the Reformist-moderate camp that supports President Hassan Rouhani. 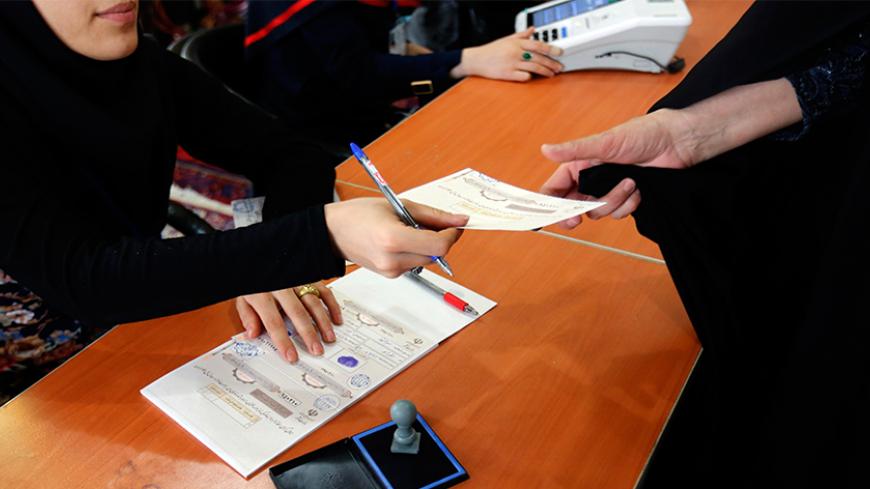 An Iranian woman receives a ballot to cast her vote in the second round of parliamentary elections at a polling station in the town of Robat Karim, southwest of Tehran, April 29, 2016. - ATTA KENARE/AFP/Getty Images

TEHRAN, Iran — After having controlled Iran’s legislature for more than a decade, hard-liners have resolutely been hit with a big defeat in the country’s parliamentary elections. In the first round of voting on Feb. 26, Reformists and moderates got massive support and secured complete victory in the Iranian capital. All of Tehran’s 30 seats were won by the joint Reformist-moderate ticket.

Overall, the Feb. 26 vote gave Reformists and moderates 83 out of parliament’s 290 seats, while the Principlists got 64 and independents won 55. In many cities other than Tehran, elections went to a second round as a number of candidates failed to gain the necessary 25% quorum of votes. The runoff, which was held April 29, was over the 68 remaining seats — lesser in number than the first round, but nevertheless momentous since it determines whether one side will have a majority.

The results of the runoff have baffled the hard-liners as much as the outcome of the first round. Based on the results published by Iranian media, 38 of the contested 68 seats were won by supporters of President Hassan Rouhani.

Overall, the Reformists and the moderates are now considered the biggest faction, with 121 seats in parliament. The Principlists and independents have meanwhile won 83 and 81 seats, respectively.

Of further note, the number of women in the coming parliament has increased to 17 — all of whom are Reformist or moderate. It is possible that one more woman may be added to the list. After having won a seat in the Feb. 26 round of polling, Reformist candidate Minou Khaleghi was disqualified by the Guardian Council. The Rouhani administration has not accepted the electoral watchdog’s disqualification, arguing that it is not legal to disqualify a candidate who had been cleared and then won a seat. Indeed, in a speech on the occasion of the May 1 International Labor Day, Rouhani implicitly declared his opposition to the ruling by saying, “For the first time, 18 women have entered the parliament, and this is a record and we are happy that our dear women are taking part in all arenas, and especially in politics.”

The victory of pro-Rouhani candidates in both rounds of parliamentary polling has yet to be acknowledged by some hard-liners. The hard-line dailies Vatan-e Emrooz and Kayhan both tried to portray Principlists as the winners, claiming that they have won a majority. If this was true, it can be assumed that it would have been the top story rather than a little box on the front page. In contrast, Raja News, which is close to the hard-line parliamentary “Endurance Front” faction, ran the headline, “The victory of the [Reformist-moderate] List of Hope.”

Given how hard-liners — both before and during the polling — went all out in persuading people not to vote for moderates and Reformists, their loss has left them humiliated.

To defeat the pro-Rouhani camp, the hard-liners had first expressed opposition to the Joint Comprehensive Plan of Action (JCPOA). Indeed, during the negotiations that led to the nuclear deal, the hard-liners at one point proposed a bill to stop the talks. That effort was only foiled after the intervention of Larijani. After the JCPOA was agreed to on July 14, 2015, the hard-liners were determined to prevent it from being ratified by parliament. However, they failed in that, too. Thus, the next phase of attacks on Rouhani and his allies involved belittling and devaluing the nuclear deal in the eyes of people — an approach that has been embraced by the hard-line-controlled state broadcaster.

Indeed, ahead of the Feb. 26 vote, state TV did not cover election-related stories in the usual manner. This was met with criticism by moderates, who implied that the state broadcaster was striving to lower the turnout as high voter participation tends to favor Reformists and moderates.

In perhaps the most telling reaction, when results of the first round of voting were announced, some hard-liners — shocked at their complete defeat in Tehran — resorted to comparing the people of the Iranian capital with that of Kufa, a city about 170 kilometers (105 miles) south of Iraq’s capital, Baghdad. In Shiite teachings, the people of Kufa are notorious for having abandoned Imam Hussein, the grandson of the Prophet Muhammad, as he was faced with battle against forces of the caliph at the time, Yazid.

If anything, the results of the polls may signal that the hard-liners’ anti-Rouhani propaganda backfired. The outcome of the Feb. 26 and April 29 votes shows that only 12 out of 80 members of parliament who proposed the bill to stop the nuclear negotiations succeeded in defeating Reformist and moderate contenders.

Three years into a hard and grueling term, Rouhani, who has been challenged repeatedly by hard-liners in the parliament, may now feel more assured and relaxed about pursuing his stated domestic political agenda. Indeed, in his International Labor Day speech, he said, “People chose the best people in the elections, and we are happy that the next parliament will be more coordinated with the government.”

Moghaddam, the Iranian political analyst, told Al-Monitor, “President Rouhani will have a stronger hand in solving the country’s problems when the parliament is in line with him. The president should seize this opportunity and take advantage of it to remove the obstacles from his way.”