Why rift between Iran’s moderates, hard-liners is really about republicanism

The continuing public feud between Ayatollah Ali Akbar Hashemi Rafsanjani and Ayatollah Mohammad-Taghi Mesbah Yazdi suggests that the revolutionary clash between moderates and hard-liners over the nature of the Islamic Republic of Iran is far from over. 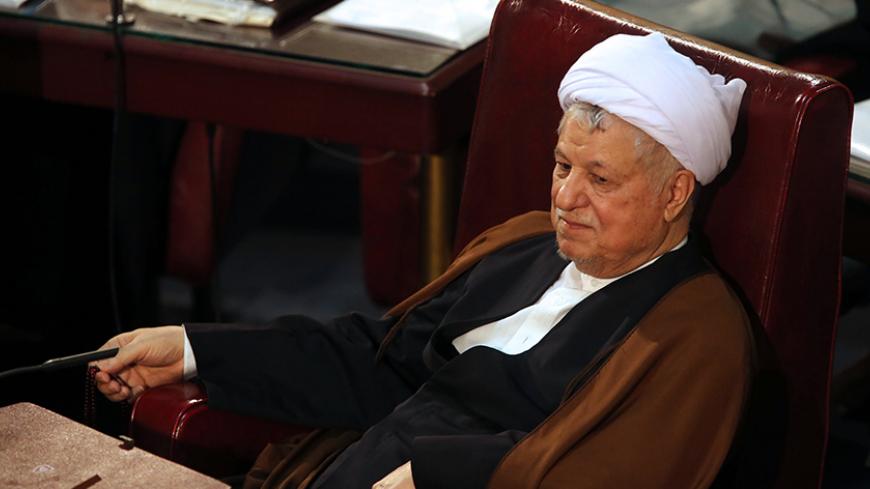 Ayatollah Ali Akbar Hashemi Rafsanjani and Ayatollah Mohammad-Taghi Mesbah Yazdi are two of the most prominent faces in Iranian politics. The former directs the moderation camp, while the latter is the godfather of the hard-liners. President Hassan Rouhani has been a longtime companion of Rafsanjani, while Mesbah Yazdi supported hard-line former nuclear negotiator Saeed Jalili in the 2013 presidential vote and his past proteges include former President Mahmoud Ahmadinejad.

In the latest salvo in this long-running rivalry, Rafsanjani caused a ruckus earlier this month when he indirectly accused Mesbah Yazdi of being an enemy of the state. Without actually naming his nemesis, Rafsanjani said Dec. 3 that “some enemies of the Imam," meaning Ayatollah Ruhollah Khomeini, "have infiltrated the sensitive centers [of power] under the guise of friendship.”

The confrontation between Rafsanjani and Mesbah Yazdi made the parliamentary and Assembly of Experts elections in February especially heated. Rafsanjani’s maneuvering produced a victory for the joint moderate-Reformist ticket, and Mesbah Yazdi was voted out of the Assembly of Experts, which is tasked with overseeing the performance of the supreme leader and also elects his successor.

The root of this dispute, which has played such a powerful role in Iranian politics, can be understood by studying the remarks and memoirs of the two men.

On Sept. 16, 2014, Rafsanjani revealed a hitherto unknown event in Iran's political history, speaking publicly for the first time about a meeting over four decades earlier: “We went to [revolutionary figure Ali] Ghoddusi’s house along with Mr. Khamenei. This person [Mesbah Yazdi] was also there. We spent the time speaking with him to convince him to continue the struggle. At last, he said that he considered fighting the shah to be haram [forbidden]. Mr. Khamenei asked him: What is your reasoning? That person responded, 'Fighting which is done alongside the Mujahedeen [-e-Khalq (MEK)] and leftists is haram.' Mr. Khamenei bitterly told him, 'If you are not interested in fighting, do not fight, but at least do not damage the struggle with these kinds of words.'" He added, "The leader had a falling out with him which lasted 10 years.”

One day later, on Sept. 17, Mesbah Yazdi’s website released his own account of the controversial meeting, which read, “Before the victory of the revolution, the supreme leader and Mr. Hashemi Rafsanjani set a time via Mr. Ghoddousi to come to my house for breakfast. During that breakfast meeting, there were no other persons present except these two respected people. [Rafsanjani] started talking, and said, ‘We have had political and cultural cooperation for years, but it has been a while that you have left and you are not with us. … We should have an alliance [against the shah] with Marxists. We should have an alliance with all anti-imperialist groups such as the Marxists, Mujahedeen, [revolutionary ideologue Ali] Shariati’s supporters … and we should put aside the disagreements and only fight against imperialism.’ I said, ‘What do you want from me, and what is your suggestion?' He said, ‘Come and cooperate with the Mujahedeen.’ I said, 'As long as I do not know that a person works for Islam, I won’t cooperate with him.'”

Mesbah Yazdi added, “From the beginning until the end of the conversation, the supreme leader sat there and was silent. … After this conversation, [Rafsanjani] left my house in anger. … [Rafsanjani's] aid to the hypocrites [a reference to the MEK] should not be forgotten. He gave them money.”

The controversy attracted attention again this summer when Hassan Khomeini, the grandson of the founder of the Islamic Republic, entered the fray. Indirectly referring to the hard-line cleric, the younger Khomeini said during a June 1 speech, “Neither the Islamic Revolution nor its leaders were reactionary. The reactionary persons were not into the struggle before the revolution and considered it haram and ultimately opposed the struggle.”

In his telling of the pre-revolutionary encounter with Rafsanjani and Khamenei, Mesbah Yazdi did not hide his anger with Rafsanjani. Although the organization is outlawed today, the MEK was considered a legitimate force among revolutionaries prior to the revolution, and it had relationships with many well-known clerics such as Ayatollah Mahmoud Taleghani. It was only after the revolution that the MEK was outlawed for its practices of indiscriminate bombings and ultimately switched sides to aid former Iraqi dictator Saddam Hussein during his 1980-1988 war with Iran.

Mesbah Yazdi and Rafsanjani’s decadeslong dispute is not limited to what transpired before the revolution. They are fundamentally at odds over the intentions of the founder of the Islamic Republic.

Mesbah Yazdi is of the belief that Khomeini did not believe in the republican component of the current Iranian state. Indeed, he said on Feb. 25, 2014, “Those who have seen the Imam’s statements in his speeches and books know that the Imam had used the words ‘the Islamic system.’ … The Imam uses the people’s votes [only] to convince the other parties [to come on board with his ideas].”

The hard-line cleric’s remarks triggered warnings by Hassan Khomeini about distortions of his grandfather's ideas. Rafsanjani also believes that the ideas of Mesbah Yazdi are dangerous to the republican component of the Islamic Republic, and he has constantly warned against them. As he noted in a speech to the Union of Islamic Associations of Golestan province on Oct. 23, 2012, “Those who want to put aside the thoughts and notions of the Imam force the people out of the [political] scene and consider their votes just for show are committing a crime.”

Though they have grown elderly, both Rafsanjani and Mesbah Yazdi are politically active, command significant authority and, perhaps most importantly, have proteges in positions of power. Thus, their public feud should be seen as part of the important and ongoing clash between moderates and hard-liners over the republican component of the Islamic Republic.