Iran’s supreme leader voices pessimism about new talks with US 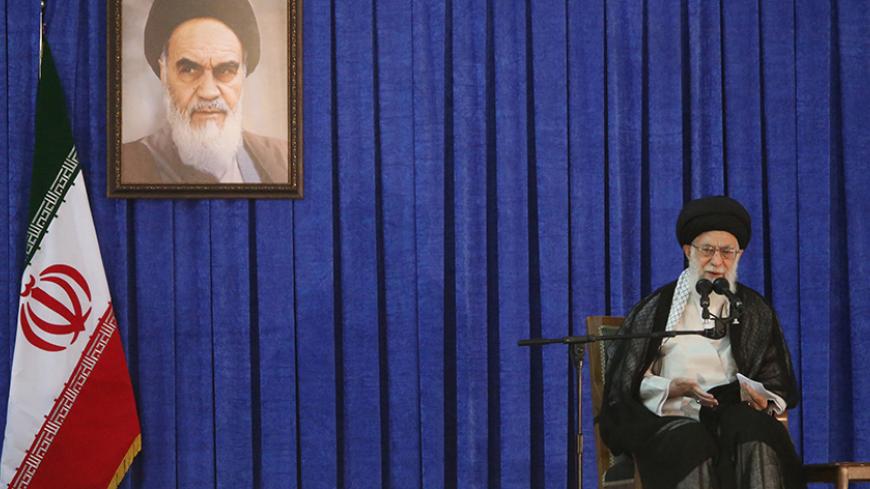 Iran’s Supreme Leader Ayatollah Ali Khamenei has expressed pessimism over holding negotiations with the United States, sending a message to moderate President Hassan Rouhani who vowed during his recent re-election campaign to enter talks with Washington to lift non-nuclear sanctions.

In a meeting with heads of the government branches and senior officials on June 12, the supreme leader urged them to “act vigilantly, meticulously and very cautiously wherever it is required to work with foreigners. Remarks should not be made in a way that implies trusting the enemy, as it will have a negative effect on both inside the nation as well as among the foreigners.”

Mentioning the nuclear negotiations, which were held between 2013 and 2015, Khamenei added, “Our government could have distrusted the enemy, but it acquiesced in some cases and for some reason — for instance to give the United States an excuse — however, no excuses were yielded and it was detrimental for us.”

In this vein, Khamenei added, “They oppose the principle of independence for this country, and even if we were a nonreligious, and nonrevolutionary, but independent state, there would be opposition and undermining [of Iran]."

In other news, Islamic Revolutionary Guard Corps Cmdr. Mohammad Ali Jafari explicitly said June 12 that Saudi Arabia was behind the two terrorist attacks in Tehran on June 7. He said, “America and the Zionist regime have supported these [terrorists] and we have accurate information that [shows] unfortunately Saudi Arabia has supported these terrorists and has asked them to do the operation in Iran.” Separately, in remarks at the opening of the Oslo Forum in Norway on June 13, Iranian Foreign Minister Mohammad Javad Zarif stated, “We have intelligence that Saudi Arabia is actively engaged in promoting terrorist groups operating near both the eastern and western borders of Iran.”

Mentioning Saudi Deputy Crown Prince and Defense Minister Mohammed bin Salman’s statement in May about working to move the battle to Iran, Zarif added, “This is a direct threat and very dangerous provocation.”

In other news, activists, artists and the media have come to the defense of Iran’s Kurdish community following the airing of negative sentiment in some quarters saying that at least several of the perpetrators of the June 7 attacks were Iranian Kurds. In its June 13 edition, Reformist Vaghaye Daily published its headline in Sorani Kurdish. “Terrorism knows no ethnicity, religion, race, law and many other things. In fact, terrorism has come to take lives. Without any logic, [terrorism] has come to scare [people] and put them apart from each other, and kill humanity,” wrote Vaghaye Daily in defense of Iran’s Kurdish community.