Rouhani hints at talks with US to lift non-nuclear sanctions

In his first press conference after being re-elected, Iranian President Hassan Rouhani hinted at the possibility of broader talks with the United States to have the non-nuclear sanctions lifted. 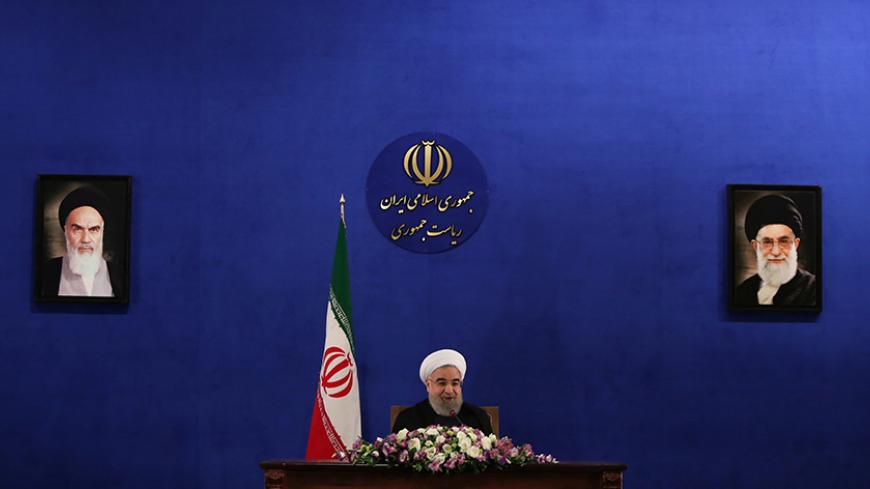 Iranian President Hassan Rouhani held his first press conference May 22 following his re-election. Answering a question regarding the recent gathering of 55 countries in Saudi Arabia to coincide with the visit of US President Donald Trump, Rouhani described the summit as merely a “show” without any political value.

“To combat terrorism, giving the money of a nation to a superpower doesn’t solve any problems,” he said, referring to the massive $110 billion arms deal Saudi Arabia inked with the United States. “The Iraqi, Lebanese and Syrian nations stood against terrorists, and Iranian diplomats and advisers have been helping them,” he added.

Further noting the US-Saudi weapons deal, Rouhani stated, “I don’t think that the people of the United States are willing to trade the loss of lives on 9/11 with billions of dollars coming from the sales of arms.”

Answering a question about the relationship between Iran and the United States under his second term, the Iranian president said, “We are waiting for the new US government to achieve stability in terms of taking a stance, agenda and mentality. … [Then] we will have a more accurate view regarding Washington [and its policies].”

He added, “The Americans have been wrong about our region. … I hope that the US administration will consider the interests of its own people.”

Addressing his electoral promise to lift the non-nuclear sanctions on Iran, Rouhani said, “If the [Iranian] nation wants the sanctions to be lifted, and if everyone comes to the field, and if the [Supreme] Leader [Ayatollah Ali Khamenei] takes the responsibility of leading this [issue], we will all stand behind the supreme leader. [Achieving] the [lifting of non-nuclear sanctions] is difficult but it is possible.”

In other news, the final results of Iran’s May 19 city and village council elections were released May 21. The outcome of the polls was shocking for both conservatives, who faced an unprecedented defeat, and for Reformists, who won most seats.

In Tehran, the Reformists won all of the City Council’s 21 seats. None of the conservatives, who have dominated the council for a decade, obtained enough votes to stay in office. However, the conservatives are protesting the results and are trying to persuade the parliament and the Guardian Council to announce a number of the Reformists’ votes invalid.

The outcome of the City Council elections is a big win for Reformists and moderates, as they also won the presidential elections, which were held concurrently, with moderate Rouhani re-elected with more than 57% of the votes.

With Reformists taking over the Tehran City Council, Mohammad Bagher Ghalibaf, who has been the mayor of Tehran for the past 12 years, will have to bid farewell to the municipality. It is not clear what his new position will be, but some reports indicate that he may be appointed as a member of the Expediency Council — or that he may return to the Islamic Revolutionary Guard Corps. Ghalibaf has registered to run for the presidency three times, and he was a candidate until just days before the May 19 vote, when he decided to step aside in favor of conservative cleric Ebrahim Raisi.

Now that Ghalibaf has no chance of remaining in the Tehran municipality, the Reformists are considering whom to appoint as the new mayor. Different names have emerged in this vein, including Mohsen Hashemi Rafsanjani, the son of the late Ayatollah Ali Akbar Hashemi Rafsanjani.

Gholamhossein Karbaschi, a leading Reformist politician, believes that Mohsen Hashemi, who has set a record by obtaining more than 1.7 million votes, has the necessary abilities to head the municipality, as he was the manager of the Tehran metro for more than a decade. Moreover, well-known Reformist analyst Sadegh Zibakalam said May 22, “Mohsen Hashemi is a technocrat and not a politician. … He will be an ideal mayor for Tehran as he has appeared excellent, disciplined and capable in the executive arena, and he has been wonderful in terms of honesty and righteousness.”

In an interview May 22, Hashemi stated that the reports and discussions about the new mayor are coming perhaps too soon, as the term of the current conservative-dominated Tehran City Council has not yet come to an end.

He said, “All the candidates and options for [heading] the Tehran municipality will be discussed at the right time. Choosing the mayor is an internal matter and is related to the members of the City Council.”