What's behind curious gold traffic between Turkey and UAE?

Gold of almost similar worth has been traded between Turkey and the United Arab Emirates in the first quarter of the year, raising suspicion that some dubious transactions may be underway. 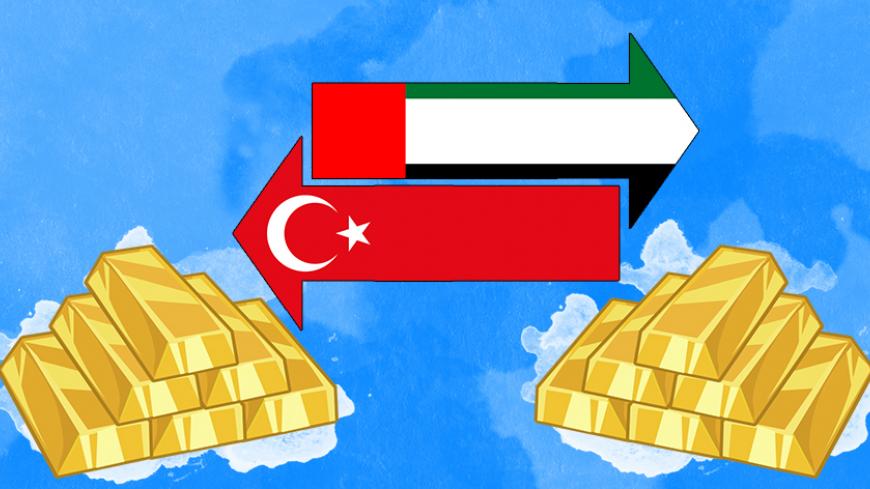 ANKARA, Turkey — While Turkey’s foreign exchange reserves are melting fast, its gold reserves have increased by 50 tons since the beginning of the year. An intriguing pattern, meanwhile, has emerged in Turkey’s gold trade with the United Arab Emirates, bringing to mind the oil-for-gold scheme with Iran that is still haunting Ankara.

Turkish-Iranian businessman Reza Zarrab, who is accused of being the key figure running the scheme to circumvent US sanctions on the Islamic Republic, was arrested in the United States last year. In March, another high-profile figure — Mehmet Hakan Atilla, deputy president of Turkey’s public bank Halkbank — landed behind bars during a trip to New York on charges of colluding with Zarrab and facilitating his financial transactions.

Now the gold controversy is back on Turkey’s economic agenda yet again. The gold traffic between Turkey and the UAE is especially striking, with export and import figures raising myriad questions.

In times of economic strain, one of the first solutions that Turkish governments propose is to lure the gold that citizens keep “under the mattress” into the economy. Gold, along with foreign exchange, is a popular form of savings in Turkey, seen as a shield against inflation and the depreciation of the national currency.

According to Deputy Prime Minister Mehmet Simsek, who is in charge of the economy, Turkish citizens today are estimated to have gold savings at home, worth relatively close to $100 billion. In early April, Simsek announced plans to issue gold-denominated bonds to draw those savings into the economy.

Some pundits, however, believe that Turks are no longer willing to part with their gold. Nasrullah Ayan, a veteran of Turkey’s financial markets who helped found the Istanbul stock exchange, argues that the under-the-mattress gold savings have been repeatedly exploited with promises of high yields in the past and people have grown mistrustful of the state on this issue.

In December, when the Turkish lira entered freefall against the dollar, President Recep Tayyip Erdogan urged citizens to prop up the national currency by converting their foreign exchange savings to Turkish liras or gold, blaming the turbulence on malicious foreign forces. Yet few seemed to have heeded his call as no decrease was seen in foreign exchange deposits in banks. Moreover, the foreign exchange reserves of the Central Bank have declined, standing at $102.7 billion at the end of April, down from $122 billion in August 2016.

Under international standards, a country’s foreign reserves are required to cover four to six months of imports at least. If the coverage drops to three months, the International Monetary Fund sees this as a serious economic risk or a red alarm. Given that Turkey’s annual imports are worth around $200 billion, its total reserves of $102 billion do not sound a red alarm yet, but are still a warning signal.

The drop in foreign reserves comes at a time when gold trade has picked up, notably with the UAE.

According to the World Gold Council’s latest data, released May 2, Turkey’s official gold reserves have climbed to 427.8 tons, up from 377.1 tons at the end of 2016. As a result, Turkey has moved from 15th to 13th place on the global gold reserve ranking.

The surging gold trade invokes the years of the oil-for-gold trade with Iran. In 2013, Turkey’s gold imports had hit a record high of $15 billion, including $2.8 billion in the first quarter. This year, the Turkish Statistical Institute (TUIK) puts gold imports at $2.7 billion in the first quarter, almost on par with the corresponding period in 2013. Nearly half of those imports, worth $1.4 billion, came from the UAE. What is even more interesting, Turkey itself exported $1.7 billion worth of gold to the UAE in the same period.

According to the Turkish Gold Miners Association, the country’s record gold imports in 2013 amounted to 302 tons.

In December the same year, corruption and bribery probes rocked the government, implicating Zarrab as well as several ministers, who allegedly helped the businessman in return for kickbacks. The government responded with massive purges in the police and the judiciary, thwarting the probes. In the wake of the scandal, the trade scheme with Iran decelerated and so did Turkey’s gold trade in general. Gold imports fell to 131 tons in 2014 and then to 49 tons in 2015. Last year, however, the imports picked up anew, reaching 106 tons. Now, with the intriguing trade with the UAE, gold imports could well climb back to the 2013 level at the end of the year.

It is worth recalling that the UAE and especially Dubai were an essential element in the oil-for-gold trade between Turkey and Iran, serving as the link via which the gold traveled to the Islamic Republic after the sanctions froze it out of the international banking system.

According to TUIK figures from March, the UAE has become the second biggest buyer of Turkish exports after Germany. Yet why similar shipments of gold are coming and going between the two countries and who gains what from such exchanges requires explanation. One cannot help but wonder whether this curious form of trade may result in another “Zarrab case” or a corruption scandal similar to the one in 2013.