Why are Turkey’s gold reserves on the rise?

The Turkish central bank’s gold reserves have reached an unprecedented level of more than $25 billion under a strategy shift driven by a combination of financial strains and risks stemming from tensions with the United States. 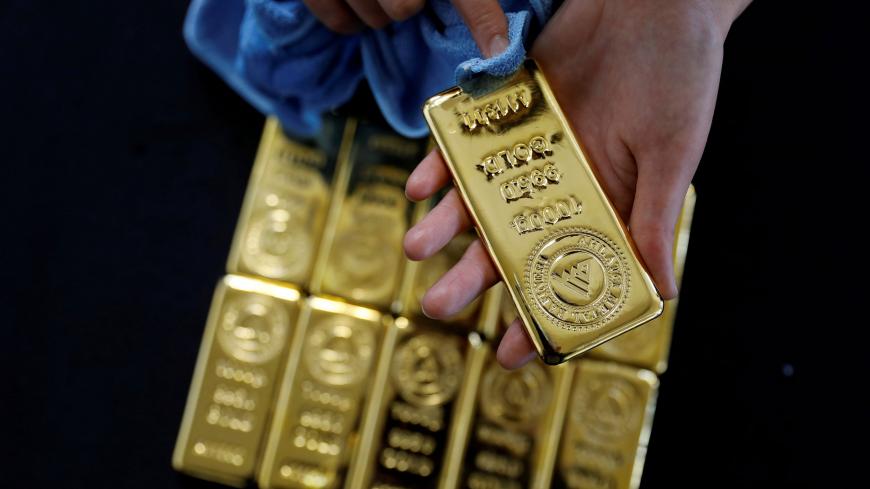 An employee works on a 1-kilogram (2.2-pound) gold bar at the Ahlatci Metal Refinery in the central Anatolian city of Corum, Turkey, May 11, 2017. - REUTERS/Umit Bektas

The unprecedented increase in gold reserves propelled Turkey to 10th place in terms of gold reserves in February. According to the World Gold Council, Turkey had 546.8 tons of gold that month, compared to 116 tons in September 2011. In terms of value, the country’s gold reserves increased by about $10 billion over the past year. What is driving the increase?

A major stimulant was a 2011 decision by the central bank allowing banks to hold 10% of their reserve requirements in gold. The decision led the banks to introduce financial products to lure the so-called under-the-pillow gold from Turkish households, that is, gold coins and jewelry kept as a means of investment and savings. Hence, gold flowing from households into the banking system has been one of the factors boosting the central bank’s reserves.

Meanwhile, in late 2017, the Treasury introduced gold bonds in another bid to draw out household stashes. Last year, the combined outcome of the banks’ and the Treasury’s efforts was 75 tons of gold moving from households into the financial system, according to sector officials.

In a sign that Turkey will continue to stock up on gold, President Recep Tayyip Erdogan on April 17 argued that international loans should be based on gold rather than dollars. Speaking at an economic gathering in Istanbul, he remarked, “Why do you have to make the loans in dollars? Let’s base the loans on gold. We need to rid states and nations of exchange rate pressure. Throughout history, gold has never been a means of pressure.” Erdogan also said that he had made the suggestion to International Monetary Fund officials at a G-20 meeting.

Ankara’s desire to boost the use of gold pertains not only to borrowing, but also to trade. This meshes with its efforts to promote interest-free banking, where lending systems are based on gold. Some, however, see more covert motives behind Turkey’s stocking on gold.

Ufuk Soylemez, a former state minister for the economy and former head of the state-owned Halkbank, believes Ankara might be taking precautions against the prospect of US sanctions against Halkbank for its role in a scheme to get around sanctions on Iran. In January, Mehmet Atilla, a senior Halkbank manager, was found guilty of conspiracy and bank fraud after a monthlong trial in a New York federal court.

Soylemez told Al-Monitor, “With an abrupt policy change, the central bank has been selling dollars and raising gold reserves to unprecedented levels, which could be a precaution against the risk of multi-billion dollar US fines on Turkish banks.”

He also drew attention to other unusual moves by the central bank, noting, “Since the end of last year, it has been intensively selling its US bonds and converting its deposits in the United Sates to gold, in addition to moving gold reserves kept in the United States to Europe.” He added, “As of Feb. 23, gold reserves hit $25.2 billion, up from $14 billion at the end of 2016. Gold now makes up almost a fourth of the total reserves, which are worth some $114.5 billion.”

According to Soylemez, the idea of using gold to curb the dollar’s dominance in the international banking system and financial markets is easier said than done. “This method can materialize only through bilateral consensus and agreements between countries,” he said. “With Iran, for instance, there was a similar trade in return for gold. Yet convincing the world to accept this as a new system is not easy.”

In what Soylemez views as another sign of Turkey-US tensions, he noted that the 30-year-old New York branch of the state-owned Ziraat Bank had been recently closed.

In an April 17 article, Hurriyet’s economy pundit Ugur Gurses reported that last year the central bank withdrew all 28.6 tons of gold it was keeping at the US Federal Reserve, moving it to the Switzerland-based Bank of International Settlements (BIS) and the Bank of England. According to the report, at the end of 2017, Turkey’s gold reserves totaled 564.7 tons, including 375.4 tons at the Bank of England, 18.7 tons at BIS, 33.7 tons at the Turkish central bank and 136.8 tons in the central bank’s account at the Istanbul stock exchange.

For Masum Turker, another former state minister for the economy, the primary aim of collecting under-the-pillow gold is to provide liquidity to the struggling economy. “To issue money, you need to have foreign exchange or gold or other precious metals. … If they fail to pump Turkish lira into the market, this will lead to a liquidity crunch,” Turker told Al-Monitor. “Let’s say a person has 100 gold coins at home. He takes those coins to the bank, and the bank deposits them at the central bank in return for Turkish liras. Then, this money becomes a loan for someone else. That’s how household gold is used to finance the market and turn the wheels of the system.”

Also according to Turker, the drive to accumulate gold aims also to increase Turkey’s resilience in the face of any external pressures it might confront on global financial markets at a time when the flow of foreign funds to Turkey has slowed, and its own exports are not strong enough to ease foreign exchange gaps.

Turkey’s hard currency woes have significantly deepened due to the ongoing slump of the Turkish lira, which lost 5% of its value against the greenback in March alone.

In times of financial crises, gold is generally a better performing instrument than foreign exchange, which appears to be another reason why Turkey is increasing its gold reserves. While stocking up on gold, Ankara is also trying to promote the use of national currencies in foreign trade, given that it is keen to reduce its reliance on reserve currencies, such as the dollar and the euro. The deal it reached with Iran in 2017 to trade in national currencies might extend to gold in the coming period. Paying in gold for Iranian gas and oil could come in handy for Turkey in difficult times.