As the Turkish lira plunges to a record low, some voices in Ankara are warning that the United States is furious over Turkey’s efforts to reduce its dependency on the dollar. 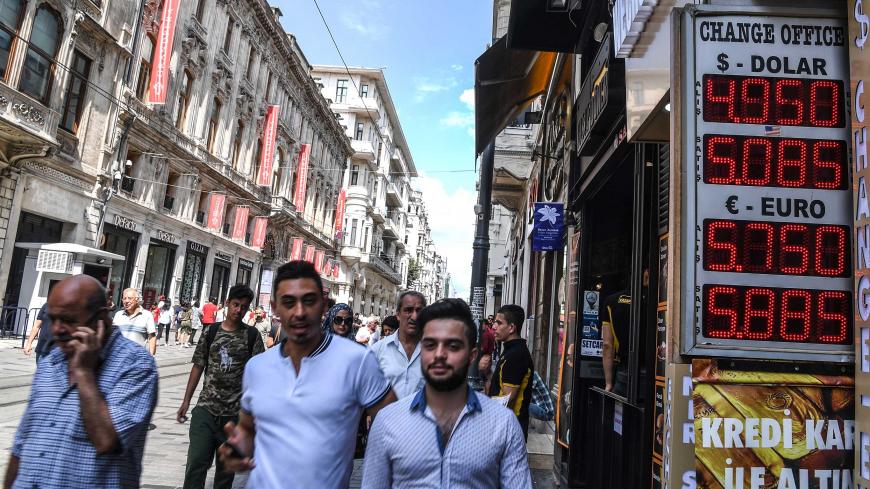 The United States slapped unprecedented sanctions on two Turkish ministers Aug. 1 over Ankara’s refusal to release a detained American pastor, but some in Turkish government quarters have a different view of what lies behind the crisis. The United States, the argument goes, is furious over Turkey’s efforts to replace the dollar with national currencies in its trade with Iran and the BRICS countries — Brazil, Russia, India, China and South Africa.

As the row over pastor Andrew Brunson escalated July 26 with President Donald Trump’s threat of sanctions, Burhan Kuzu, an administrative board member of the Justice and Development Party (AKP) and former adviser to President Recep Tayyip Erdogan, tweeted, “The issue is not Brunson, don’t you get it yet? Trump has become a hostage to the Jewish lobby. This reaction stems from Turkey’s warm relations with Russia, Iran and China. The United States has gone mad over developments related to trade in national currencies and casting off the dollar.”

Erdogan seemed to send a similar message in his meeting with Russian President Vladimir Putin on the sidelines of the BRICS summit in South Africa the same day. “The solidarity between us is making some jealous,” he said, and Putin reportedly reacted with a smile.

The more than 1,600 likes for Kuzu’s tweet suggest that his narrative resonated well with AKP supporters. Yet many others rejected his argument and responded with critical comments and sarcasm. One user wrote, “I think we should immediately set up a makeshift court outside Brunson’s home [where he is under house arrest] and send him back to the United States tonight. Or things will go bad.” Another user posed a stinging question referring to a recent credit deal: “Why didn’t we cast off the dollar when getting the $3.6 billion loan from China?”

Turkey’s efforts to use national currencies in foreign trade have already made progress vis-a-vis Iran and Russia. Ankara seeks to reduce its dependency on the dollar and strengthen the Turkish lira, whose dramatic depreciation this year has only worsened amid the tensions with Washington. According to Erdogan, “One of the best means to curb the pressure of foreign exchange rates is to trade in national currencies on the international platform.”

Turkey’s drive also has to do with its widening current account deficit, which stood at a staggering $57.6 billion in May. But can it resolve a chronic problem solely by using national currencies in trade with certain partners?

Turkey’s exports lag well behind its imports, which is a major factor fueling the problem. In 2017, exports rose 10.2% to $157 billion, while imports grew 18% to reach $234 billion. Accordingly, the country’s foreign trade deficit expanded 37% to $76.7 billion. Shunning the dollar offers no magic solution as long as this imbalance persists.

These figures alone illustrate the uphill task that Turkey faces in creating the desired alternatives in trade.

The drive to curb the use of the dollar also reflects the drift away from the West that Turkey has experienced under the AKP. Though a member of NATO and still a candidate for European Union membership, Ankara is seeking to build new alliances in “a new world” beyond Europe and the United States. Its desire to join the BRICS group is yet another manifestation of its mistrust of the West.

Turkey is seeking to boost cooperation with China, keen to benefit from its economic potential. Apart from talks on using national currencies in bilateral trade, the two sides have discussed the prospect of China building two nuclear power plants and taking part in major infrastructure projects in Turkey, including the artificial waterway Canal Istanbul, Erdogan told reporters after the BRICS summit.

In another notable move, he said Aug. 3 that Turkey would issue yuan-denominated bonds for the first time to counter the “biased reports” of Western credit rating agencies and diversify funding sources.

Another option that Ankara is promoting against hard-currency pressures is the use of gold. The Central Bank itself has been actively replacing foreign exchange reserves with gold. According to the World Gold Council, Turkey’s gold reserves reached 546.8 tons in February, up from 116 tons in September 2011. The huge increase put Turkey in 10th place among the countries with the largest gold reserves. The expansion of Islamic banking has been another way of promoting the use of gold in financial activities.

The chill between Ankara and Washington is unlikely to end soon even if the row over Brunson is resolved. US officials said last week that they were reviewing Turkey’s duty-free access to the American market after Ankara levied tariffs on US goods in retaliation for Trump’s steel tariffs. Yet neither the pastor’s detention nor Turkey’s efforts to shun the dollar are the essential reason for the bilateral crisis, which appears bound to continue. Turkish-US ties are fraught with many serious problems, including Turkey’s plans to acquire Russian S-400 missiles, the involvement of its state-owned Halkbank in Iranian schemes to evade US sanctions, differences in Syria and its growing political, economic and military ties with Russia, Iran and China. Still, the Brunson case is of symbolic significance, illustrating how far the bonds between the two countries — NATO allies for 66 years — have eroded.