Amid Washington’s trade war on China, Ankara is also grumbling about a massive trade gap with Beijing, but a number of factors stand in Turkey's way to resolve the deficit. 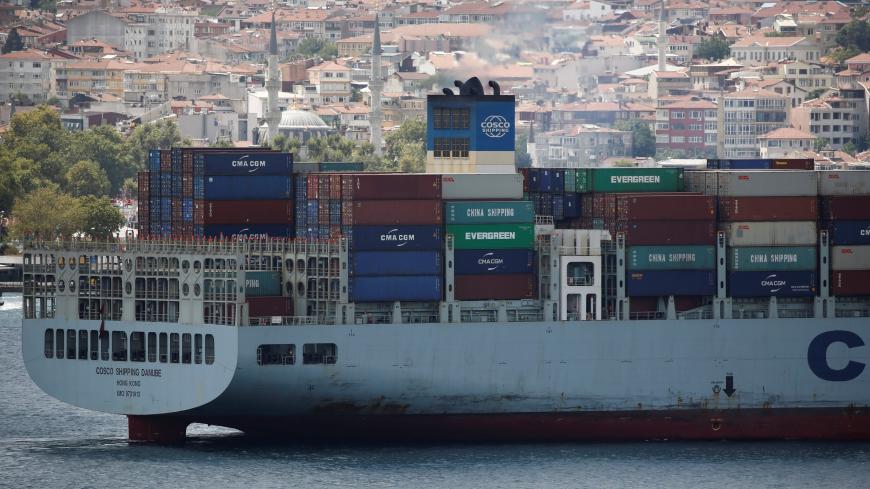 The Cosco Shipping Danube, a container ship of the China Ocean Shipping Company (Cosco), sails in the Bosporus on its way to the Mediterranean Sea, in Istanbul, Turkey, Aug. 11, 2018. - REUTERS/Murad Sezer

President Donald Trump has stepped up his trade war on China after the United States’ trade deficit in goods with China hit a record $419.2 billion last year. US exports to China were worth $120.3 billion, while its imports were 4.5 times bigger, totaling $539.5 billion. Turkey, saddled in relative terms with a worse trade deficit with China, has begun to openly complain about the imbalance and has raised the prospect of taking measures, but how much can it really do?

Last year, Turkey’s exports to China totaled $2.9 billion, while its imports were seven times bigger, standing at $20.7 billion. China was the 16th largest buyer of Turkish goods and the second largest exporter to Turkey after Russia. In 2017, China was the No. 1 exporter to Turkey, but in 2018 Turkish imports from China decreased 11.3% while its imports from Russia rose 12.7%, putting Russia in the top spot. Despite the downtick, Turkey’s trade gap with China remains massive, accounting for 33% of Turkey's overall foreign trade deficit of $55.1 billion.

Looking at the past decade, Turkey’s trade deficit with China totaled a staggering $190.6 billion from 2009 to 2018. The gap, which stood at $11 billion in 2009, enlarged steadily, peaking at $23 billion in 2016 before falling to $20.4 billion in 2017 and $17.8 billion last year. The decrease in the past two years, however, stems not from an increase in Turkey’s exports but a shrinkage in the bilateral trade volume.

Judging by the trend in Turkish exports, closing the gap seems impossible. Exports to China peaked at $3.6 billion in 2013, only to go down in the ensuing years. Throughout the past decade, Turkish exports to China have fluctuated between $2 billion and $3 billion, with the year 2013 being the sole exception.

The economic crisis bruising Turkey could explain why it buys less from China, but the decrease in China’s import of Turkish goods suggests that trade haggles have begun between the two countries.

Like the United States, Turkey is irked by Chinese trade domination and has begun to openly express it. Treasury and Finance Minister Berat Albayrak said in January that the current state of trade with China and South Korea was not sustainable. “It is supposed to be a win-win affair, but we see a picture in Turkey’s disfavor. Either we gain together or we will take different steps,” he said.

Speaking on the sidelines of the World Economic Forum in Davos a week later, Albayrak said “serious work” had begun to narrow the trade gaps with the two Asian heavyweights. “We can say that we are not in a happy commercial relationship,” he said, pledging “a much more active policy” on South Korea and China.

It remains unclear whether Ankara’s “active policy” will entail higher tariffs or other measures to curb exports. Still, punishing China at a stroke like the United States is trying to do is not possible for Turkey for several reasons.

Bilateral ties hold the potential of significant headway in other areas. China is interested in boosting investment in Turkey. Its ambassador to Ankara, Deng Li, said in March that China aimed to increase investment in Turkey to $6 billion by 2021 from the current $2.8 billion.

Though Ankara has not yet outlined any measures specifically for China, general policies aimed at curbing imports — the result of Turkey’s currency woes — are bearing on China directly. Earlier this month, for instance, the 25% special consumption tax on mobile phones was doubled to 50%. China tops the list of mobile phone exporters to Turkey.

Last year, Ankara imposed certain import restrictions on shoe and textile products. Other factors complicating imports from China such as protracted customs procedures and extra paperwork have reached such a level that importers' complaints have made headlines in the press.

Yet Turkey’s importation of intermediary goods from China stands in the way of heavier restrictions.

Meanwhile, Turkish citizens could unwittingly “help” the government in its efforts to balance trade with China. With the Turkish lira nosediving since last year, they are becoming poorer and the demand for imported luxury goods, especially mobile phones, is on the decline, auguring some forced adjustments.

China in the Mideast
Economy and trade
Turkish economy