Turkey scrambles for trade opportunities in Africa to make up for major losses in economic ties with Iran, Iraq, Syria and Russia. 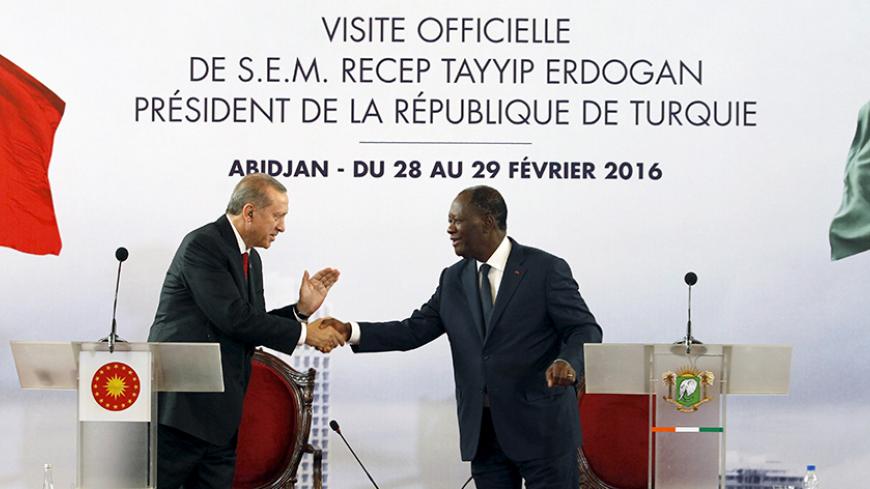 As Turkey’s regional policy drifted from “zero problems with neighbors” to “precious loneliness,” the accompanying loss of trade markets in the neighborhood and Russia has made Africa a potential “lifesaver” in Ankara’s eyes. Accompanied by 150 business people, President Recep Tayyip Erdogan went on a tour of Western Africa from Feb. 28 to March 3, visiting the Ivory Coast, Ghana, Nigeria and Guinea, following a trip to the continent’s eastern coast in January 2015 that took him to Ethiopia, Djibouti and Somalia.

What groundwork does Turkey have in Africa to build on? The Turkish Foreign Ministry’s official website lists the following milestones in ties with the continent: In 2008, the First Turkey-Africa Cooperation Summit was held in Istanbul with the participation of 49 African countries, resulting in the adoption of a road map on boosting ties. Follow-up gatherings were held later in Addis Ababa and Istanbul. In January 2013, Turkey became a member of the African Development Bank. At the Second Turkey-Africa Cooperation Summit, held in Equatorial Guinea’s capital, Malabo, in November 2014, a Joint Implementation Plan was agreed for the 2015-19 period. Since 2009, the number of Turkish embassies in Africa has increased from 12 to 39. As part of efforts to boost economic exchanges with the continent, Turkey has signed 38 bilateral agreements on commercial and economic cooperation, 17 bilateral agreements on investment promotion and protection, and eight bilateral agreements on the prevention of double taxation.

The $23 billion figure in trade volume may sound impressive on its own, but given that it covers 49 countries, commercial ties are clearly in a fledgling stage.

And what is Turkey pursuing on the African market? Following Erdogan’s 2015 African tour, Deputy Culture and Tourism Minister Huseyin Yayman, who was part of the delegation, said, “Turkey is making the test drive of a new foreign policy in Africa … It stands as a model with its secular democracy. As Turkey is opening up to the world, domestic problems are fading in importance. Geostrategists say the 21st century will be an African century. Turkey is, in fact, seeking its history and a new future in the Dark Continent.”

Yayman’s emphasis on secularism is present also in the Foreign Ministry’s narrative. It is quite ironic, though, that the Islamist-leaning Turkish government promotes secularism in Africa, while avoiding the same message at home.

Now, back in the economic realm, the question is: Can Turkey increase its share on the African market at an extent that makes up for the regress in trade with neighbors and Russia?

Turkey’s trade volume with Nigeria, one of the stops on Erdogan’s latest tour, stood at $426 million in the first 10 months of 2015. With the Ivory Coast and Ghana, the trade volumes were $390 million and $399 million respectively for the whole year. Even a two-fold increase in trade with those countries would mean less than $3 billion in total, while trade with neighboring Iran alone was $25 billion off target last year. On the Iraqi and Russian markets, meanwhile, Turkey’s exports were down by some $2 billion and $2.5 billion respectively in 2015. The downturn with Russia became even more pronounced this year, with the decline in exports worsening from 39% in 2015 to 60% in the first two months of the year.

In remarks to Al-Monitor, Faik Oztrak, a former treasury and foreign trade undersecretary who is now a lawmaker for the main opposition Republican People’s Party, drew attention to another alarming detail. “Market diversification is important but not sufficient. One has to look at what Turkey manufactures,” he said. “The technologic level of Turkish exports has been decreasing. The share of advanced technology goods in manufacturing industry exports was 6.2% in 2002, while it is down to 3.2% as of January 2016. In other words, Turkey is failing to export goods that are light in weight but heavy in value, which is forcing it to turn to markets where it can sell low-technology goods.”

Omer Cihad Vardan, the head of Turkey’s Foreign Economic Relations Council, warned that competition was already heated on the African market. “China, the United States and European countries have made great headway there. We must act very fast from now on,” he told reporters last week.

In an overview of trade opportunities in the countries on Erdogan’s itinerary, Vardan stressed the Ivory Coast’s mining, energy and construction sectors offered an investment volume of $46 billion. He said, “With a population of nearly 200 million, Nigeria is hungry for Turkish export goods. There is a high demand for Turkish textiles. Seventy tons [of Turkish textiles] make their way to Nigeria every week in the form of luggage [carried by travelers] trade. The Ivory Coast, meanwhile, targets an economic growth of nearly 10% in 2016. Twenty-five Turkish companies are currently active in the country, with investment concentrated mainly in the construction sector. The country has a housing deficit of 400,000 homes, and they are well-disposed to Turkish contractors. In Ghana, the industry sector is growing faster than agriculture, and the energy sector tops the development agenda.”

According to DEIK, Ghana offers opportunities also in the fields of railway transport, renewable energy and citrus fruits, while in the Ivory Coast, Turkish contractors face tough competition from French and Chinese counterparts.

One has to keep in mind that the African markets are thousands of kilometers away, home to the world’s poorest people with the lowest purchasing power. They could hardly become a substitute for the decline in Turkey’s exports to neighboring countries. Moreover, China is already in full force in Africa, posing tough competition with its cheap goods. In sum, Africa’s retail market offers little hope for Turkey’s traders, but its contractors and investors stand a chance in the long term.